The writer and reformer Elizabeth Cady Stanton (1815–1902) was perhaps the most gifted feminist leader in American history.

The makings of a feminist

Elizabeth Cady was born in Johnstown, New York, on November 12, 1815. She came from a wealthy and politically important family. Her father, Daniel Cady (1773–1859), was a well-known lawyer who had served in Congress, on the New York state legislature, and as a judge on the New York state supreme court. Her mother came from a wealthy family whose members had included a hero of the American Revolution (1775–83), when the thirteen British colonies in North America fought for their freedom.

The Cadys had eleven children, most of whom did not survive to adulthood. Eleazar Cady, their only son to survive, died when he was twenty, leaving them with four daughters. In her autobiography, Eighty Years and More, Stanton related her father's feelings at having lost all his male heirs. Although the eleven-year-old Elizabeth attempted to console him, his reaction was to tell her, "Oh, my daughter, I wish you were a boy." The experience made young Cady determined to be the equal of any male. She tried hard to please her father by excelling in areas normally reserved for men, starting with Greek and horsemanship.

Cady's father's profession also led her to embrace the cause of women's rights. As the daughter of a judge, she was exposed early to the legal barriers to women's equality. While still a child, she heard her father tell abused women that they had no legal alternative but to endure mistreatment by their husbands and fathers. She was especially outraged by the rights of husbands to control their wives' property.

As a young woman, Elizabeth Cady studied at the Troy Female Seminary from 1830 to 1833. She had the best education then available to women. The school offered a strong academic course of studies in addition to the more typical educational options for women at that time—which tended to focus on developing social skills. However, while at Troy, she experienced a nervous collapse 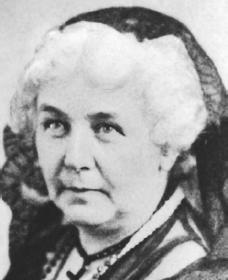 Elizabeth Cady Stanton.
Reproduced by permission of
AP/Wide World Photos
.
after experiencing a religious conversion (change) that filled her with fears that she would go to hell. After this experience, she developed an intense dislike toward organized religion.

In 1840 she married the abolitionist (a person who is against slavery) leader Henry B. Stanton (1805–1887). Her feminist side showed at the wedding ceremony, in which she insisted (and Stanton agreed) that she would not give the wife's traditional promise to "obey" her husband. Keeping her maiden name as Elizabeth Cady Stanton, rather than going by the name of Mrs. Henry B. Stanton, was also unusual at the time.

Although Henry Stanton sympathized with his wife's ambitions for a wider role in the world, he was not wealthy, and she remained home with her five children for many years. All the same, she was able to do some writing and speaking for the feminist cause. In 1848 she organized America's first woman's rights convention in Seneca Falls, New York, where the Stantons lived. She also composed a declaration of principles, which described the history of humankind as one in which men had repeatedly and intentionally suppressed the rights of women in order to establish "absolute tyranny" over them. Despite opposition, she persuaded the convention to approve a resolution calling for women's suffrage, or women's right to vote.

The Civil War (1861–65) was fought between the northern states and southern states to decide whether or not slavery would be allowed in new territories, and whether or not the South would leave the Union to form an independent nation. During the war Stanton and her ally Susan B. Anthony (1820–1906) created the National Woman's Loyal League to build support for what became the Thirteenth Amendment to the Constitution, which ended slavery in the United States. Once the slaves were free, Stanton and Anthony worked to ensure that women would be given the vote along with former male slaves. However, it was thought that if the struggle to gain the right to vote for black men was associated with votes for women, neither black men nor women of any color would get the vote.

This opposition only made Stanton and her colleagues more stubborn. Their campaign finally divided the women's suffrage movement into two camps. One was their own, New York-based band of uncompromising radicals (people who are extreme in their political beliefs), called the National Woman Suffrage Association. The other was a more conservative group, the American Woman Suffrage Association, which was centered in Boston and supported the idea that attaining the vote for black men was more important than demanding the vote for women. There were several differences in the positions of the two organizations, and a good deal of personal hostility developed between them. By 1890, however, these problems were overcome, and the two organizations merged into the National American Woman Suffrage Association. Stanton became the group's president.

Stanton remained active during her later years, however, she was less concerned with suffrage and more interested in reforming divorce laws and other similar matters. A stylish and witty writer, she worked with Anthony and Matilda Gage on the first three volumes of the massive collection History of Woman Suffrage and edited The Woman's Bible. Stanton also wrote articles on a variety of subjects for the best magazines of her time. She died on October 26, 1902, in New York City. With Susan B. Anthony, she is recognized today as one of the most important figures in the early movement to gain women's rights in the United States.

Ward, Geoffrey C. Not For Ourselves Alone: The Story of Elizabeth Cady Stanton and Susan B. Anthony. New York: Knopf, 1999.

who is the author of this article about Elizabeth Cady Stanton?
2
Katie

That is so imformative! Thank you so much! It said I couldn't send this message until I had 50 characters... so I am still typing so I can tell you how much this has helped me out!!
3
Emmy

Who was the author of this article talking about Elizabeth cady stanton? Thanks :)
4
jennifer

pretty amazing to learn about the article facts so cool..