German philosopher Edith Stein was a leading supporter of the early twentieth century's phenomenological school of thought, which explored human awareness and perception. A Jew by birth who converted to Catholicism, she was killed in a Nazi (having to do with members of the German Socialist Party led by Adolf Hitler from 1933 to 1945) concentration camp (a guarded enclosure where political prisoners were kept) and canonized (declared a saint) in 1998.

Edith Stein was born on October 12, 1891, in Breslau, Germany. She was the youngest of eleven children born to Jewish lumber merchants hailing originally from Silesia (now part of Poland). Raised in a very religious atmosphere, four of her siblings died 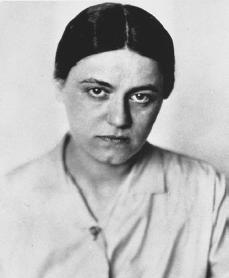 Edith Stein.
Reproduced by permission of the
Corbis Corporation
.
before Stein's birth. Stein's father died when she was only a year old, leaving her mother, Auguste Stein, in charge of the debt-ridden business and the surviving children. Because her mother was required to devote most of her time to work outside the home, her oldest daughter, Else, took on much of the responsibility of raising the younger children.

As a child, Stein was known for her intelligence and sense of humor—she would often recite poetry and make clever remarks. But she disliked her reputation as "the smart one" of the family and began to develop a more quiet nature in her early school days. She attended the Victoria School in Breslau, where she not only began classes early, but quickly became the top student in her grade. Her love of learning extended to her hours at home as well, where she spent much of her free time reading.

At the age of thirteen, Stein underwent a crisis of faith and decided to leave school. Although she no longer believed in God, she did not discuss her beliefs with her family and continued to attend religious services. Stein soon came to terms with her new ideas and decided to devote her life to teaching and the pursuit of the truth. She returned to Victoria School and completed her coursework in hopes of attending college.

Stein began her advanced education at the University of Breslau in 1911 where she was influenced by the works of Edmund Husserl (1859–1938) who was a professor of philosophy (the study of knowledge) at Göttingen University and was the founder of the school of thought known as phenomenology, an examination of the development of human awareness. The work was an eye-opener to Stein, who decided that she wanted to study with Husserl at Göttingen. It was at Göttingen that Stein was first exposed to the Roman Catholic faith. When in 1916 Husserl took a professorship at the University of Freiburg, he requested that Stein join him as his graduate assistant. She was very successful at Freiburg and soon became known as a top philosopher at the university.

Stein's interest in Catholicism increased in 1917 which led her to read the New Testament, the second half of the Bible. These experiences convinced Stein that she believed in God and the divinity of Jesus Christ, but did not convert to Catholicism until 1921.

During a stay at a girl's school in Speyer, Germany, Stein was encouraged by the Jesuit priest and philosopher Erich Przywara not to abandon her academic work. At his urging, she began a German translation of a Latin work on truth by St. Thomas Aquinas (1225–1274). Through her study of Aquinas and her discussions with Przywara, she was convinced that she could serve God through a search for truth. Her writing and translations became popular, and Stein was invited to lecture for a number of groups on religious and women's issues in Germany, Switzerland, and Austria.

Attacks on Jewish people were becoming frequent and in 1933, Adolf Hitler (1889–1945) and his Nazi Party came to power in Germany. One result of the rise of Hitler was that Stein and other people of Jewish origin in university positions were fired from her job. Stein felt that she had a unique opportunity and responsibility, as a Jewishborn Catholic, to bridge the gap of understanding between Christians and Jews. To accomplish this, she wrote the book Aus dem Leben einer Jüdischen Familie, ("Life in a Jewish Family") which tried to show the similar human experiences of Jews and Christians in their daily lives. In 1933, she attempted to combine the thoughts of Husserl and Aquinas in her book Endliches und ewiges Sein ("Finite and Eternal Being"), completed in 1936. Under the anti-Jewish laws in effect then, however, the book was refused for publication and was not printed until 1950.

Because of the Nazi rule, Stein realized she was no longer safe in her native country and fled to a convent (a community of nuns) in Echt in the Netherlands on December 31, 1938. In Echt, she was joined by her sister Rosa, who had also converted to Catholicism.

In 1942 the Nazis began removing Jews from the Netherlands, and Stein urgently applied for a Swiss visa (an official authorization of travel) in order to transfer to a convent in Switzerland. Her sister was unable to arrange similar travel arrangements, however, and Stein refused to leave without her. On August 2, 1942, the sisters were removed from the convent at Echt by Nazi troops and transported to a concentration camp at Amersfoort, Netherlands, for a few days before being sent on to the Auschwitz camp in Poland. While nothing is known about their last days or the exact circumstances of their deaths, it is assumed the women were among the many people killed in the Nazi gas chambers, placed in mass graves on the site, and later cremated, or burned to ashes.

In 1987, decades after the travesties of the Jewish Holocaust (the horrors imposed by the Nazis which resulted in the deaths of thousands of Jews), Stein was beatified (blessed) by Pope John Paul II (1920–), who praised her as a Catholic martyr (one who dies for their beliefs) and also praised her phenomenological works. This created controversy among Jewish groups, who were upset that she was remembered in this way since the reason she was killed was because she was a Jew, not because she was Catholic. In an apologetic statement, John Paul II acknowledged that her fate was a symbol of the great loss of Jewish life during World War II (1939–45; a war fought between the Axis Powers: Germany, Italy, and Japan, and the Allied Powers: England, France, the Soviet Union, and the United States). This discussion highlighted the difficult, but important place Stein holds among both Jews and Catholics. Stein's canonization (emergence to sainthood) by the Pope on October 11, 1998, also drew protest from some Jews.

Graef, Hilda C. The Scholar and the Cross: The Life and Work of Edith Stein. Westminster, MD: Newman Press, 1955.

You need to correct your facts. 6 million Jews were killed by the Nazis, not thousands.