The Soviet statesman Joseph Stalin was the supreme ruler of the Soviet Union. He led his country alongside America and England through World War II (1939–45) in their fight against Germany, Italy and Japan. As ruler of Russia, Stalin was the leader of world communism for almost thirty years.

Joseph Stalin was born Iosif Vissarionovich Dzhugashvili on December 21, 1879, in Gori, Georgia. He was the only surviving son of Vissarion Dzhugashvili, a cobbler who first practiced his craft in a village shop but later in a shoe factory in the city. Stalin's father died in 1891. Stalin's mother, Ekaterina, a religious and illiterate (unable to read or write) peasant woman, sent her teenage son to the theological seminary in Tpilisi (Tiflis), Georgia, where Stalin prepared for the ministry. Shortly before his graduation, however, he was expelled in 1899 for spreading subversive views (ideas that went against those of the government).

Stalin then joined the underground revolutionary Marxist movement in Tpilisi, a movement devoted to the views of Karl Marx (1818–1883) and Frederich Engels (1821–1896), who believed in the political system of socialism that gave power to the working class and would ultimately lead to communism, where goods and services would be distributed by the government. In 1901 he was elected a member of the Tpilisi committee of the Russian Social Democratic Workers Party. The following year he was arrested, imprisoned, and later exiled (forced to move) to Siberia, a cold and remote region of Russia. Stalin escaped from Siberia in 1904 and rejoined the Marxist underground in Tpilisi. When the Russian Marxist movement split into two factions (rival groups), Stalin identified himself with the Bolsheviks.

During the time of the 1904–1905 revolution, Stalin made a name for himself as the organizer of daring bank robberies and raids on money transports, an activity that Marxist leader V. I. Lenin (1870–1924) considered important due to the party's need for funds. Many other Marxists considered this type of highway robbery unworthy of a revolutionary socialist.

Stalin participated in congresses (governing parties) of the Russian Social Democratic Workers Party at Tampere, London, and Stockholm, Sweden, in 1905 and 1906, meeting Lenin for the first time at these congresses. In 1912 Lenin recruited Stalin into the Central Committee of the Bolshevik party. Stalin spent the major portion of the years from 1905 to 1912 in organizational work for the movement, mainly in the city of Baku, Russia. The secret police arrested him several times, and several times he escaped. Eventually, after his return from Vienna, Austria, the police caught him again, and he was exiled to the faraway village of Turukhansk beyond the Arctic Circle. He remained there until the fall of czarism, the Russian rule of a sole leader or king. He adopted the name Stalin ("man of steel") around 1913.

After the fall of czarism, Stalin made his way at once to Petrograd, Russia, where until the arrival of Lenin from Switzerland he was the senior Bolshevik and the editor of Pravda, the party newspaper. After Lenin's return, Stalin remained in the high councils of the party, but had only a small role in the preparations for the October Revolution, which placed the Bolsheviks in power. In the first position of the communist Soviet government, he held the post of people's commissar for nationalities (in charge of party loyalty).

Within the party, he rose to the highest ranks, becoming a member of both the Political Bureau and the Organizational Bureau. When the party Secretariat was organized, he became one of its leading members and was appointed its secretary general in 1922, where Lenin appreciated Stalin's ability as a politician and as a troubleshooter. The strength of Stalin's position in the government and in the party was probably anchored by his secretary generalship, which gave him control over party personnel administration—over admissions, training, assignments, promotions, and disciplinary matters. This position also ranked him as the most powerful man in Soviet Russia after Lenin.

During Lenin's last illness and after his death in 1924, Stalin served as a member of the three-man committee that ran the affairs of the party and the country. Stalin represented, for the time, the right wing (conservative) of the party that wanted to stay true to the ideas of the revolution. He and his spokesman, Nikolai Bukharin (1888–1938), warned against revolutionaries and argued in favor of continuing the more cautious and patient policies that Lenin had installed with the New Economic Policy (NEP).

In 1927 Stalin succeeded in defeating the entire opposition and in eliminating its leaders from the party. He then adopted much of its domestic program by starting a five-year plan of industrial development and by executing it with a degree of recklessness that angered many of his former supporters, who then formed an opposition to him. This opposition, too, was defeated quickly, and by the early 1930s Stalin had gained dictatorial (total) control over the party, the state, and the entire Communist International. 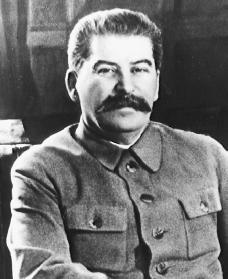 Although always depicted as a towering figure, Stalin, in fact, was fairly short. His personality was highly controversial, and it remains a mystery. Stalin was crude and cruel and, in some important ways, a primitive man. In political life he tended to be cautious and slow-moving, and his writing style was much the same. Stalin was at times, however, a clever speaker and a fierce debater. He seems to have possessed boundless energy and an amazing ability to absorb detailed knowledge.

About Stalin's private life, little is known beyond the fact that he seems always to have been a lonely man. His first wife, a Georgian girl named Ekaterina Svanidze, died of tuberculosis, a terrible disease that attacks the lungs and bones. His second wife, Nadezhda Alleluyeva, killed herself in 1932, apparently over Stalin's dictatorial rule of the party. The only child from his first marriage, Jacob, fell into German hands during World War II (1939–45; a war fought between the Axis—Germany, Italy, and Japan—and the Allies—led by Britain, France, the Soviet Union, and, later, the United States) and was killed. The two children from his second marriage outlived their father, but they were not always on good terms with him. The son, Vasili, an officer in the Soviet air force, drank himself to death in 1962. The daughter, Svetlana, fled to the United States in the 1960s.

In back-to-back five-year plans, the Soviet Union under Stalin began to modernize (to accept modern ideas and styles) with great speed. Although the military needs of the country drained away precious resources, and World War II brought total destruction to several cities and death to many millions of citizens, the nation by the end of Stalin's life had become an important industrial country in the world, second only to the United States.

The price the Soviet Union paid for this great achievement remains staggering. It included the destruction of all free enterprise (business organizations) in both town and country. The transformation of Soviet agriculture in the early 1930s into collectives (groups of managed farms) tremendously damaged the country's food production. Living standards were drastically lowered at first, and more than a million people died of starvation. Meanwhile, Stalin jailed and executed vast numbers of party members, especially the old revolutionaries and the leading figures in many other areas. Stalin created a new kind of political system characterized by severe police control, strengthening of the government, and personal dictatorship. Historians consider his government one of history's worst examples of totalitarianism, or having complete political control with no opposition. In world affairs the Stalinist system became isolationist, meaning the country moved away from building relations with foreign nations.

From the middle of the 1930s onward, Stalin personally managed the vast political and economic system he had established. Formally, he took charge of it in May 1941, when he assumed the office of chairman of the Council of Ministers. After Germany invaded the Soviet Union, Stalin also assumed formal command of the entire military establishment.

Stalin's conduct of Russian military strategy in the war remains as controversial as most of his activities. Some evidence indicates that he committed serious mistakes, but other evidence gives him credit for brilliant achievements. The fact remains that under Stalin the Soviet Union won the war, emerged as one of the major powers in the world, and managed to bargain for a distribution of the spoils of war (seized land resulting from Soviet victory) that enlarged its area of domination significantly.

Stalin died of a brain hemorrhage (an abnormal bleeding of the brain) on March 5, 1953. His body was placed in a tomb next to Lenin's in Red Square in Moscow. After his death Stalin became a controversial figure in the communist world, where appreciation for his great achievements was offset by harsh criticism of his methods.

It was really helpful for my school project. Hope you keep supplying useful info's about significant people all over the world!
2
bill

Thank you for writing a biography of a controversial figure that rarely gets a fair and unbiased treatment. I learned more about Stalin's personal life in this brief document than I did in many other articles.
The statement that best characterizes your attempt at providing honest information is:
"Some evidence indicates that he committed serious mistakes, but other evidence gives him credit for brilliant achievements." This is true.

Thank you for keeping a cool head.
3
stephen

Stalin killed at least 20 million of his own people through executions and internment in forced labor camps! His so called achievements have to be balanced up against the death and destruction of the Russian people during his reign of terror as the dictator of all Russia. He was a mass murdering paranoid megalomaniac with delusions of communist world domination and he did not care who he had to kill to do it! Too emotional a reply? Ask people whose families suffered under Stalin's reign what type of ruler he was!