Benjamin Spock, pediatrician (doctor who treats children) and political activist, was most noted for his book Baby and Child Care, which significantly changed widely held attitudes toward the raising of infants and children.

Benjamin McLane Spock was born on May 2, 1903, in New Haven, Connecticut, the oldest child in a large, strict New England family. His family was so strict that in his eighty-second year he would still be saying, "I love to dance in order to liberate myself from my puritanical [strict and conservative] upbringing." He was educated at private preparatory schools when he was young and attended Yale from 1921 to 1925, majoring in English literature. He was also a member of the rowing crew that represented the United States in the 1924 Olympic Games in Paris, France. Spock began medical school at Yale in 1925 but transferred to Columbia University's College of Physicians and Surgeons in 1927. By this time he had married Jane Davenport Cheney.

Spock had decided well before starting his medical studies that he would "work with children, who have their whole lives ahead of them." He believed that pediatricians of the time were focusing too much on the physical side of child development, so he learned psychiatry (medicine focusing on the mind) as well.

Between 1933 and 1944 Spock practiced pediatric (specializing in children) medicine. At the same time he taught pediatrics at Cornell Medical College and consulted (advised) in pediatric psychiatry for the New York City Health Department. On a summer vacation in 1943 he began to write his most famous book, Baby and Child Care. He continued to work on it from 1944 to 1946 while serving as a medical officer in the navy. 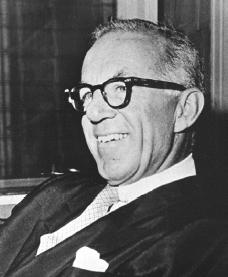 Benjamin Spock.
Courtesy of the
Library of Congress
.

Many early baby-care books said to feed infants on a strict schedule and not to pick them up when they cried. Spock's book broke with the strict tone and rigorous instructions found in earlier generations of baby-care books. Spock told his readers, "You know more than you think you do.… Don't be afraid to trust your own common sense.… Take it easy, trust your own instincts, and follow the directions that your doctor gives you." The response was overwhelming. At that time Baby and Child Care became America's all-time best-seller except for William Shakespeare's (1564–1616) works and the Bible. By 1976 it had also passed Shakespeare.

Spock's political activism began during this period, growing logically out of his concern for children. A healthy environment for growing children, he believed, included a radiation-free atmosphere to breathe. In 1962 he became cochairman of SANE, an organization dedicated to stopping nuclear bomb tests in the Earth's atmosphere.

The following year Spock campaigned for Medicare, a government program to help older citizens. He angered the American Medical Association, many of whose members were already suspicious of a colleague who wrote advice columns for the Ladies Home Journal and Redbook instead of writing technical articles for the medical journals.

Spock was an early opponent of the Vietnam War (1955–75; a conflict fought in Vietnam when Communist North Vietnam invaded democratic South Vietnam). As the war escalated (grew), so did antiwar protest, in which Spock participated energetically. He marched and demonstrated with young people who had not yet been born when he had begun his medical career.

Spock's political opponents accused him of teaching "permissiveness" in Baby and Child Care. They claimed an entire generation of American youth had been raised and ruined. Without success Spock pointed out that similar student protests were happening in Third World countries, where his book was not sold, and were not happening in Western European countries, where it sold well.

Because of Spock's own strict personal upbringing and his acute moral sense, he may have intended a lot less than some of them realized when he told parents to "relax." In 1968 he revised Baby and Child Care to make his intentions more clear, now cautioning his readers "Don't be afraid that your children will dislike you" when they set limits and enforced them. Nevertheless, the 1968 edition showed a fifty percent drop in sales. Spock thought it was because of his stand on the war in Vietnam.

On May 20, 1968, Spock was put on trial for conspiracy, along with several other leading war protesters. The charge was that he had counseled young people to resist the draft. He was convicted, but on appeal the verdict was set aside (cancelled) on a technicality (small detail). Some upset readers turned in their well-thumbed copies of Baby and Child Care in order to prevent further undermining of their children's patriotism. To many other readers, however, the government's indictment (charging with an offense) of the baby doctor seemed rather like prosecuting Santa Claus.

Modifies and explains his views

Two books published in 1970, Decent and Indecent: Our Personal and Political Behavior and A Teenager's Guide to Life and Love, made it clear that Spock was a good deal more of a traditional moralist than either his friends or enemies realized. He had been driven into the antiwar and other reform movements by the same old-fashioned conscience that propelled some of his opponents in exactly the opposite direction. At the same time the doctor showed himself capable of growing and changing. In 1972 he ran for president on the People's Party (an independent political party) ticket.

Spock was also capable of admitting a mistake. Badgered for some five years on the lecture platform by feminists objecting to the gender-role stereotypes of fathers and mothers as they appeared in Baby and Child Care, he eventually admitted that much of what they had said had been right. In 1976, thirty years after its initial publication, Spock brought out a third version of the famous book. He deleted material he himself termed "sexist" and called on fathers to share more of the parental responsibility.

Formally retired in 1967, Spock was the kind of person who never really retired in spirit. Contemplating his own death as his health began to fail in the 1980s, he wrote in 1985 (at the age of eighty-two) that he did not want any dark funeral tunes played over him: "My ideal would be the New Orleans black funeral, in which friends snake-dance through the streets to the music of a jazz band."

Spock had chronic bronchitis and suffered a stroke in 1989. His second wife, Mary, worked with him on his autobiography, Spock on Spock, which was published in 1989. Dr. Spock died at his home in La Jolla, California, on March 15, 1998, at the age of ninety-four.

Spock's work influenced how Americans brought up an entire generation of young people. Even today his books are still regarded as a popular source of information for bringing up children.

Spock, Benjamin, and Morgan, Mary. Spock on Spock: A Memoir of Growing Up with the Century. New York: Pantheon Books, 1989.