Steven Spielberg is one of the wealthiest and most powerful moviemakers in Hollywood. The director of such elaborate fantasies as Close Encounters of the Third Kind and E.T.: The Extra-Terrestrial, he is regarded as a man who understands the pulse of America as it would like to see itself.

Steven Spielberg was born in Cincinnati, Ohio, on December 18, 1947. He was the oldest and the only son of four children. His father, Arnold, was an electrical engineer who worked in what was then the newly emerging field of computers. His mother, Leah, had been a concert pianist.

Steven's mother and three sisters doted on (gave a great deal of attention, spoiled) him. He was indulged throughout his childhood at home, but he was not treated the same way at school. He displayed little enthusiasm for his studies and made average grades at best. The Spielbergs moved frequently because of the father's job. They moved to New Jersey, suburban Phoenix, Arizona, and finally to what would be known as "Silicon Valley" near San Jose, California. 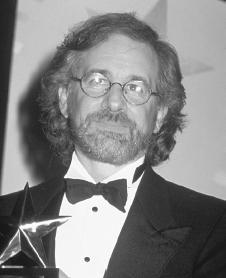 Steven Spielberg.
Reproduced by permission of
Archive Photos, Inc.
on Earth, a spectacular 1952 circus epic directed by Cecil B. De Mille (1881–1959). As a child, Spielberg began using his family's home movie camera. He started recording camping trips and other family events but soon grew dissatisfied with them. He began to film narrative movies and attempted to set up shots with different angles and primitive special effects. By the time he was twelve years old he actually filmed a movie from a script using a cast of actors. He grew increasingly ambitious and continued to make movies from then on.

When Spielberg was sixteen, he filmed a feature-length science fiction movie, which he entitled Firelight. This movie was over two hours long and had a complex plot about an encounter with some aliens. His father rented a local movie theater to show the film. In one night it made back the $500 it cost to film it.

Spielberg's poor grades in high school prevented him from entering the University of Southern California (UCLA), but he was accepted at California State College at Long Beach. He graduated in 1970 with a bachelor's degree in English. Because California State had no formal film program, he frequently went to the movies and saw every film that he could. He also cajoled (flattered and manipulated) his way past the guards at Universal Studios and watched major projects being filmed.

Spielberg continued to make films and prepared a short subject film, Amblin', which he later entered in the 1969 Atlanta Film Festival. It also won an award at the Venice Film Festival, and got him a seven-year contract at the studio whose gates he used to crash—Universal. Studio executives had been so impressed with Amblin', a simple story about a boy and girl who hitchhike from the Mojave Desert to the ocean, that they released it with Love Story, a major hit of 1970. Today Spielberg uses the name "Amblin" for his own production company.

Spielberg began his career as a professional by directing several episodes of television programs that were being shot at Universal. Included in his work at this time were episodes of Marcus Welby, M.D. and Columbo.

The first movie that Spielberg directed professionally was a made-for-television movie named Duel. It was about a deadly battle of wits between an ordinary man driving a car and a crazed driver of an eighteen-wheeler truck. It was generally regarded as one of the greatest movies ever made for U.S. television. It was released in movie theaters in Europe and Japan as a feature film. It took sixteen days to make and had only cost $350,000 to produce. Its release overseas earned over $5 million and the film earned many awards.

Spielberg was offered many scripts to film after that, but he was not impressed by the quality of the properties that he was offered. He withdrew from the studio mainstream for a year in order to develop a project of his own.

Directing what he wanted

What Spielberg came up with was The Sugarland Express, a drama about a woman who browbeats (forcefully convinces) her husband into breaking out of jail to kidnap their baby from its foster parents. A spectacular car chase happens after the couple steals a police cruiser. The film was a critical success but a commercial failure. Nonetheless, it led to the breakthrough film of Spielberg's career, the spectacularly successful Jaws (1975).

Despite bringing in Jaws at 100 percent over its $3.5 million budget, Spielberg became Hollywood's favorite director of the moment when the film grossed over $60 million in its first month. The film was as popular with critics as with the public. Spielberg was now in a position to do whatever he wanted. He embarked on a film whose subject had obsessed him since his childhood.

Science fiction and beyond

Close Encounters of the Third Kind (1977) was perhaps Spielberg's most personal film. It dealt with the heroic efforts of average middle-class Americans to make contact with visitors from another planet. For all of its staggering special effects, its power derived from its exploration of what people will do when they find that they have the opportunity to make their dreams come true.

The "Indiana Jones" trilogy (1981–1989), E.T.: The Extra-Terrestrial (1982), and The Color Purple (1985) are examples of Spielberg at his best and worst. The "Indiana Jones" pictures mixed a loving affection for old-time movie serials with a contemporary sensibility. However, the high level of gore and violence in the second installment of the series, Indiana Jones and the Temple of Doom (1984), led to the creation of a new rating code, "PG-13," which cautions parents to the presence of violence, language, and nudity—but at a level or an intensity that is lower than that found in an R-Rated movie.

E.T. (1982) swept the nation, and its catchphrase, "Phone home!," was heard around the world. Another film, The Color Purple (1985), received mixed response. Spielberg was accused of patronizing (treating in a lowly manner; looking down upon) African Americans and prettifying rural Southern poverty. Others praised the movie; in fact, it received multiple awards and award nominations.

Spielberg was a great favorite among his fellow directors, such as George Lucas (1944–) and John Landis (1950–). He stood by the latter when he was implicated in the deaths of three cast members of Twilight Zone: The Movie, a film which Spielberg also worked on. In 1991 Spielberg directed a big-budget movie about Peter Pan called Hook.

As Spielberg continued to direct and produce he grew more and more powerful. He was able to make any film that he wanted and seemed totally uninterested in pleasing the public or the critics.

Spielberg's 1993 mega-hit Jurassic Park was the subject of one of the longest and most intensive pre-release publicity campaigns in film history. It was about a present day theme park that featured genetically engineered dinosaurs as the main attraction. The movie was a box office and home theater success. Spielberg released the sequel entitled The Lost World: Jurassic Park in 1997.

Perhaps the most poignant (emotionally moving) of Spielberg's movies was the critically acclaimed Schindler's List (1993), which was filmed in black and white. It was a fictionalized account of real life instances in which German businessman Oskar Schindler (1908–1974) saved the lives of thousands of Jews who worked in his factory during World War II (1939–45; a war fought between the Axis Powers of Germany, Italy, Japan and the Allies of Great Britain, France, the Soviet Union, and the United States). The picture won the 1993 Best Picture Academy Award and Spielberg won Best Director. In 1999 he won both the Golden Globe and the Academy Award for Best Director for his work on the movie Saving Private Ryan.

Spielberg married actress Amy Irving in 1985. They had one son, Max, before a divorce. He later married Kate Capshaw in 1991, and they have five children.

Spielberg has won many awards both in the United States and abroad not only for his films, but also for his work supporting human rights and social justice. He continues to be one of the most powerful film directors and producers in the world.

Steven Spielberg was not actually born in 1947, like many people believe. His birth certificate shows that he was born December 18th, of 1946. Throughout all of his schooling his correct birth year of 1946 is recorded. It changed to 1947 when he began making his first movies in Hollywood. It's not really known why he lied about it being 1947. In 1995 in a lawsuit Spielberg's attorney Marshall Grossman states that Spielberg was born in 1946 and any references to 1947 are incorrect. Spielberg was known for changing his age throughout his career. I found this information in his 1997 Biography by Joseph McBride.
2
A Johnson

At what age did Steven leave Cincinnati? What elementary and middle schools did he attend? Does he have family that still lives in Cincinnati?