The Greek playwright Sophocles was responsible for several improvements in the presentation of drama. His tragedies (plays in which characters suffer because of their actions and usually die) rank him among the greatest Greek classical dramatists.

The son of Sophilus, the owner of a successful weapons factory, Sophocles was born c. 496 B.C.E. in Colonus near Athens, Greece. He grew up during the most brilliant intellectual period of Athens. Sophocles won awards while in school for music and wrestling, and because of his constant activity he was known as the "Attic Bee." His music teacher was Lamprus, a famous composer. Tradition says that because of his beauty and talent, Sophocles was chosen to lead the male chorus at the celebration of the Greek victory over the Persians at Salamis.

In 468 B.C.E. Sophocles defeated the famous playwright Aeschylus (525–456 B.C.E. ) in one of the drama contests common at the time. He gained first prize more than any other Greek dramatist. He was also known for being friendly and popular. From 443 to 442 B.C.E. he served the Athenian empire as imperial treasurer, and he was elected general at least twice. His religious activities included service as a priest, and he turned over his house for the worship of Asclepius (the Greek god of medicine) until a proper temple could be built. For this he was honored with the title Dexion as a hero after his death. Sophocles had two sons, Iophon and Sophocles, by his first wife, Nicostrata. He had a third son, Ariston, by his second wife, Theoris.

Style and contributions to theater

Of the approximately 125 tragedies that Sophocles is said to have written, only 7 have survived. According to the Greek biographer Plutarch (46–119), there were three periods in Sophocles's development as a writer: imitation of the style of Aeschylus, use of an artificial style, and use of a style that is most expressive of character. The existing plays are from the last period. While the works of Aeschylus deal with the relationship between man and the gods, the works of Sophocles deal with how characters react under stress (mental pressure). Sophocles's heroes are usually subjected to a series of tests that they must overcome.

Sophocles is credited with increasing the number of actors with speaking parts in a play from two to three. He raised the number of chorus members from twelve to fifteen and developed the use of painted scenery. He also abandoned the practice of presenting tragedies as trilogies (series of three works) by instead presenting three plays with different subjects. This led to faster development of characters. Sophocles's songs are also considered to be beautifully structured.

The dates of Sophocles's seven known plays are not all certain. In Ajax (447 B.C.E. ) the hero, described as second only to Achilles, is humiliated (reduced to a lower position in the eyes of others) by Agamemnon and Menelaus when they award the arms of Achilles to Odysseus. Ajax vows revenge on the Greek commanders as well as on Odysseus. Except, the goddess Athena makes him believe he is attacking the Greeks when he is in fact attacking sheep. When he realizes what he has done, he is so upset that he commits 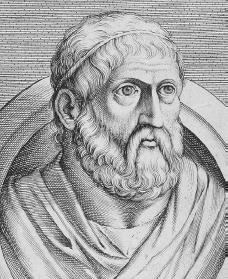 Sophocles.
Reproduced by permission of
Archive Photos, Inc.
suicide. He is given a proper burial only after Odysseus steps in to make it possible.

The title character in Antigone (442–441 B.C.E. ) is a young princess whose uncle, King Creon, has forbid her to bury her brother Polyneices. Her brother, in attempting to seize the throne from his brother Eteocles, killed Eteocles in a fight and also died himself. Antigone has been interpreted as showing the conflict between devotion to family and devotion to the state. In Trachiniae (437–432 B.C.E. ) Heracles's wife, Deianira, worries about the fifteen-month absence of her husband. Deianira sends him a poisoned robe that she believes has magical powers to restore lost love. Her son, Hyllus, and her husband denounce her before dying, and she commits suicide. In this play Sophocles describes the difficult situation of the person who, without meaning to, hurts those whom he or she loves.

Oedipus Rex (429 B.C.E. ), which many have considered the greatest play of all time, is not about sex or murder, but man's ability to survive almost unbearable suffering. The worst of all things happens to Oedipus: unknowingly he kills his own father, Laius, and is given his own mother, Jocasta, in marriage after he slays the Sphinx. When a plague (a bacteria-caused disease that spreads quickly and can cause death) at Thebes forces him to consult an oracle (a person through whom a god is believed to speak), he finds that he himself is the cause of the plague. Sophocles brings up the question of justice—why is there evil in the world, and why does the man who is basically good suffer? The answer is found in the idea of dike —balance, order, justice. The world is orderly and follows natural laws. No matter how good or how well-meaning man may be, if he breaks a natural law, he will be punished and he will suffer.

Electra (418–414 B.C.E. ) is Sophocles's only play whose theme is similar to those of the works of Aeschylus ( Libation Bearers ) and Euripides (484–406 B.C.E. ; Electra ). Again Sophocles concentrates on a character under stress: a worried Electra, anxiously awaiting the return of her avenging brother, Orestes. In Philoctetes (409 B.C.E. ) Odysseus is sent with young Neoptolemus, the son of Achilles, to the island of Lemnos to bring back Philoctetes with his bow and arrows to help capture Troy. Neoptolemus has second thoughts and refuses to deceive the old man. Philoctetes clearly shows how man and society can come into conflict and how society can toss aside an individual when it does not need him.

Oedipus at Colonus (401 B.C.E. ), produced after Sophocles's death, is the longest of his dramas. It brings to a conclusion his concern with the Oedipus theme. Exiled by Creon, Oedipus becomes a wandering beggar accompanied by his daughter Antigone. He stumbles into a sacred grove at Colonus and asks that Theseus be summoned. Theseus arrives and promises him protection, but Creon tries to remove Oedipus. Theseus comes to the rescue and foils Creon. The arrival of his son Polyneices angers Oedipus, who curses him. Oedipus soon senses his impending death and allows only Theseus to witness the event by which he is changed into a hero and a saint.

"Many are the wonders of the world," says Sophocles in Antigone, "but none is more wonderful than man." Sophocles's interest in human welfare is best shown in this famous quotation. Man is able to overcome all kinds of obstacles and is able to be inventive and creative, but he is mortal and therefore limited. Suffering is simply part of the nature of things, but learning can be gained from it, and through suffering man can achieve dignity.

Hi, I don't think you ever mentioned Sophocles's second son Ariston. I am writing about him and i need more information. thanks