Stephen Sondheim redefined the Broadway musical form with his creative and award winning productions. He continues to be a major force in the shaping of the musical theater.

Stephen Sondheim was born on March 22, 1930, to upper-middle-class parents, Herbert and Janet Sondheim. His father was a dress manufacturer and his mother was a fashion designer and interior decorator. He studied piano for two years while very young and continued his interest in the musical stage throughout his education.

Sondheim's parents divorced in 1942 and his mother took up residence in Doylestown, Pennsylvania, which was near the summertime residence of Oscar Hammerstein II (1895–1960). As a friend of Hammerstein's son, Sondheim was able to ask the famous librettist (a person who writes the words for a musical or opera) for an evaluation of his first stage work, a high school production produced at the age of fifteen.

Hammerstein's critical evaluation of By George began the four-year relationship that was decisive in formulating the young Sondheim's style. Sondheim became Hammerstein's personal assistant and gained entry into the world of professional theater.

While attending Williams College in Massachusetts, Sondheim performed duties in the preparation and rehearsals of the Rogers and Hammerstein productions of South Pacific and The King and I. Upon graduation he won the Hutchinson Prize, which enabled him to study composition at Princeton University.

Sondheim began his professional career in television by writing scripts for the Topper and The Last Word series. He also composed incidental music (minor pieces used as background or between scenes) for the Broadway musical Girls of Summer.

Shortly after that Sondheim made the acquaintance of Arthur Laurents, who introduced him to Jerome Robbins and Leonard Bernstein (1918–1990) as the possible song writer for West Side Story, which was produced in 1957. The young man found himself involved in one of the most successful shows ever produced on Broadway. However, in an interview Sondheim gave to National Public Radio (NPR) in 2002, he said that, in spite of the success of West Side Story, he is embarrassed by the lyrics he wrote for the show because of their lack of artistic merit.

Sondheim followed this success by working on the Broadway production of Gypsy in 1959, distinguishing himself as one of the great young talents in American musical theater.

Sondheim, intent on broadening his talents, sought productions where he could use his musical as well as lyrical expertise. He produced A Funny Thing Happened on the Way to the Forum in 1962, a farce (broad and unsophisticated humor) based on the plays of Plautus (c. 254–184 B.C.E. ). The show had an impressive run of almost one thousand performances, won the Tony Award for Best Musical, and was made into a successful film in 1966. Sondheim followed with two less successful ventures: Anyone Can Whistle (1964) and Do I Hear a Waltz (1965). Although both failed commercially, Sondheim contributed songs of high quality.

Develops his own musicals

In 1970 Sondheim produced Company, which once again won him unanimous (an agreement by all) praise from the critics. The production was awarded the Drama Critics and Tony Award for Best Musical of the season, and Sondheim received awards for the best composer (writer of music) and best lyricist (song writer). One critic commented that Company "is absolutely first rate … the freshest … in years.… This is a wonderful musical score, the one that Broadway has long needed."

The following year Sondheim produced Follies, a retrospective (a look back) musical about the Ziegfield Follies, large Broadway productions of the 1920s. The composer blended the nostalgia (sentimental feelings for the past) of popular songs of the past with his own style of sentimental ballad. He was awarded both the Drama Critics and Outer Critics Circle Awards for Best Musical of 1971. 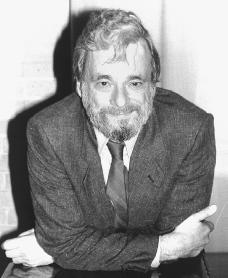 Noted as a relentless (untiring, unwilling to stop) innovator, Sondheim worked with Hal Prince on Pacific Overtures (1976). In an attempt to relate the westernization of Japan with the commercialized present, Sondheim fused the unlikely elements of Haiku poetry (unrhymed verse of three lines that are made up of seventeen syllables), Japanese pentatonic scales (musical scales made up of only five notes), and Kabuki theater (a form of traditional classical Japanese drama) with modern stage techniques in a production that was hailed as a successful Broadway hit. It was followed by Sweeney Todd (1979), the melodramatic story of the barber of Fleet Street (London) who conspired with the neighborhood baker to supply her with enough barbershop victims for her meat pies. Less funny than tragic, Sweeney Todd explored the dark side of the nineteenth-century English social system.

Sondheim's talent derives from his ability to cross different types of music and theater, thus offering Broadway audiences works of remarkable craft. He deals with unexpected subjects that challenge and test the form of the American musical. Sondheim explores issues of contemporary life: marriage and relationships in Company; madness and the human condition in Anyone Can Whistle; nostalgia and sentiment in Follies; Western imperialism (extension of power) in Pacific Overtures; and injustice and revenge in Sweeney Todd.

Sondheim avoids filler, or needless content, in his lyrics. He concentrates on direct impact through verbal interplay. His lyrics are witty without ever sacrificing honesty for superficially (shallow and unimportant) clever rhyme. Similarly, he maintains his musical individuality even while operating in the adopted Eastern musical style of Pacific Overtures. Sondheim's consistent ability to merge words and music that hint at the deeper personality of his characters distinguishes him as a composer of rare ingenuity (clever at inventing) and talent.

Side by Side by Sondheim, a musical tribute to the artist, was successfully produced in 1976. Sondheim's later works included the film score for Reds (1981) and Sunday in the Park with George (1984), which won a 1985 Pulitzer Prize. Into the Woods was another musical hit on Broadway in 1987.

In recent years many of Sondheim's earlier projects have been reproduced and have enjoyed success in cities in the United States and in Europe. Sondheim's first musical Front Porch in Flatbush, which first opened in 1955 on Broadway, was put on in Chicago, Illinois, in 1999. In 2001 Follies, a musical that had not been on Broadway since opening in 1971, returned to the New York theater district. In 2000 Sondheim won the best new musical award from the twenty-fifth annual Laurence Olivier Awards for Merrily We Roll Along. The show had first opened in 1981 on Broadway but was new to London, England. Sondheim's musicals have thus stood the test of time, as they continue to entertain theatergoers worldwide.