The Greek philosopher and logician (one who studies logic or reason) Socrates was an important influence on Plato (427–347 B.C.E. ) and had a major effect on ancient philosophy.

Socrates was the son of Sophroniscus, an Athenian stone mason and sculptor. He learned his father's craft and apparently practiced it for many years. He participated in the Peloponnesian War (431–04 B.C.E. ) when Athens was crushed by the Spartans, and he distinguished himself for his courage. Details of his early life are scarce, although he appears to have had no more than an ordinary Greek education before devoting his time almost completely to intellectual interests. He did, however, take a keen interest in the works of the natural philosophers, and Plato records the fact that Socrates met Zeno of Elea (c. 495–430 B.C.E. ) and Parmenides (born c. 515 B.C.E. ) on their trip to Athens, which probably took place about 450 B.C.E.

Socrates himself wrote nothing, therefore evidence of his life and activities must come from the writings of Plato and Xenophon (c. 431–352 B.C.E. ). It is likely that neither of these presents a completely accurate picture of him, but Plato's Apology, Crito, Phaedo, and Symposium contain details which must be close to fact.

From the Apology we learn that Socrates was well known around Athens; uncritical thinkers linked him with the rest of the Sophists (a philosophical school); he fought in at least three military campaigns for the city; and he attracted to his circle large numbers of young men who delighted in seeing their elders proved false by Socrates. His courage in military campaigns is described by Alcibiades (c. 450–404 B.C.E. ) in the Symposium.

In addition to stories about Socrates's strange character, the Symposium provides details regarding his physical appearance. He was short, quite the opposite of what was considered graceful and beautiful in the Athens of his time. He was also poor and had only the barest necessities of life. Socrates's physical ugliness did not stop his appeal. 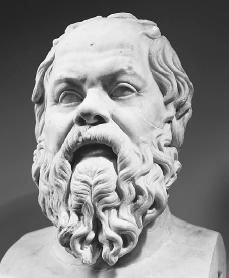 Socrates.
Reproduced by permission of the
Corbis Corporation
.

There was a strong religious side to Socrates's character and thought which constantly revealed itself in spite of his criticism of Greek myths. His words and actions in the Apology, Crito, Phaedo, and Symposium reveal a deep respect for Athenian religious customs and a sincere regard for divinity (gods). Indeed, it was a divine voice which Socrates claimed to hear within himself on important occasions in his life. It was not a voice which gave him positive instructions, but instead warned him when he was about to go off course. He recounts, in his defense before the Athenian court, the story of his friend Chaerephon, who was told by the Delphic Oracle (a person regarded as wise counsel) that Socrates was the wisest of men. That statement puzzled Socrates, he says, for no one was more aware of the extent of his own ignorance than he himself, but he determined to see the truth of the god's words. After questioning those who had a reputation for wisdom and who considered themselves, wise, he concluded that he was wiser than they because he could recognize his ignorance while they, who were equally ignorant, thought themselves wise.

Socrates was famous for his method of argumentation (a system or process used for arguing or debate) and his works often made as many enemies as admirers within Athens. An example comes from the Apology. Meletus had accused Socrates of corrupting the youth, or ruining the youth's morality. Socrates begins by asking if Meletus considers the improvement of youth important. He replies that he does, whereupon Socrates asks who is capable of improving the young. The laws, says Meletus, and Socrates asks him to name a person who knows the laws. Meletus responds that the judges there present know the laws, whereupon Socrates asks if all who are present are able to instruct and improve youth or whether only a few can. Meletus replies that all of them are capable of such a task, which forces Meletus to confess that other groups of Athenians, such as the Senate and the Assembly, and indeed all Athenians are capable of instructing and improving the youth. All except Socrates, that is. Socrates then starts a similar set of questions regarding the instruction and improvement of horses and other animals. Is it true that all men are capable of training horses, or only those men with special qualifications and experience? Meletus, realizing the absurdity of his position, does not answer, but Socrates answers for him and says that if he does not care enough about the youth of Athens to have given adequate thought to who might instruct and improve them, he has no right to accuse Socrates of corrupting them.

Thus the Socratic method of argumentation begins with commonplace questions which lead the opponent to believe that the questioner is simple, but ends in a complete reversal. Thus his chief contributions lie not in the construction of an elaborate system but in clearing away the false common beliefs and in leading men to an awareness of their own ignorance, from which position they may begin to discover the truth. It was his unique combination of dialectical (having to do with using logic and reasoning in an argument or discussion) skill and magnetic attractiveness to the youth of Athens which gave his opponents their opportunity to bring him to trial in 399 B.C.E.

Meletus, Lycon, and Anytus charged Socrates with impiety (being unreligious) and with corrupting the youth of the city. Since defense speeches were made by the principals in Athenian legal practice, Socrates spoke in his own behalf and his defense speech was a sure sign that he was not going to give in. After taking up the charges and showing how they were false, he proposed that the city should honor him as it did Olympic victors. He was convicted and sentenced to death. Plato's Crito tells of Crito's attempts to persuade Socrates to flee the prison (Crito had bribed [exchanged money for favors] the jailer, as was customary), but Socrates, in a dialogue between himself and the Laws of Athens, reveals his devotion to the city and his obligation to obey its laws even if they lead to his death. In the Phaedo, Plato recounts Socrates's discussion of the immortality of the soul; and at the end of that dialogue, one of the most moving and dramatic scenes in ancient literature, Socrates takes the hemlock (poison) prepared for him while his friends sit helplessly by. He died reminding Crito that he owes a rooster to Aesculapius.

Socrates was the most colorful figure in the history of ancient philosophy. His fame was widespread in his own time, and his name soon became a household word although he professed no extraordinary wisdom, constructed no philosophical system, established no school, and founded no sect (following). His influence on the course of ancient philosophy, through Plato, the Cynics, and less directly, Aristotle, is immeasurable.

In the section "his thoughts" it would be better if you added what his philosophical ideas about religion , life and really anything as in that passage you do not mention any of this instead you talk about certain events in his life.
2
Steven Freedman

Trials in Arhens at that time had two parts. The first was to dtermine whether the charges were true or not. The second was to determine the punishment if the accused were found guilty. The jury for Socrates trial was composed of 501 citizens, the maximum number allowed as many Athenians were interested in the case. There was no deloberation; after the trial was over the jury voted using shards of broken pottery. In the first part Socrates was found guilty by a modest plurality. Then came the second part. The prosecutor, Melitus, proposed that the penalty be death, therebt forcing Socrates to decide his own punushment in lieu of death. It was expected that he would chose banishment for a number of years, that he had to choose. Instead Socrates was so sure that the jury would not condem him to death that he proposed that he be given the honor trtaditionally awarded to winners i8n the Olympic games, a dail;y free meal at the seat of government for the remainder of his life. This infuriated the jury and the vote for the death penalty was a considerably larger numbe than the vote to convict. Socrates did not accept the favor of his friends, to escape, but so believed in his duty to obey the law of Athens that he accepted the deth penalty. He was 70 years old at the time of his death; it is not very likely that he had many years of heatlth toward to.