The African American athlete Wilma Rudolph made history in the 1960 Summer Olympic games in Rome, Italy, when she became the first American woman to win three gold medals in the track and field competition.

Almost every circumstance was stacked against Wilma Rudolph from the day she was born on June 23, 1940. Her father, Ed Rudolph, had eleven children by a first marriage while his second marriage yielded eight more, of which Wilma was the fifth. At birth she weighed only four-and-a-half pounds. Her mother, Blanche, a housemaid, feared for Wilma's survival from the outset. The family lived in tiny St. Bethlehem, Tennessee, a farming community about forty-five miles southeast of Nashville, Tennessee. Shortly after Wilma was born, the Rudolphs moved to nearby Clarksville, Tennessee, where they lived in town. Her father worked as a porter on railroad cars, and her mother cleaned houses six days a week. Older siblings helped care for the sickly baby who had come into the world prematurely.

At the age of four, Wilma was severely weakened when she contracted polio, a disease that attacks the central nervous system and often causes developmental problems in children. She survived the illness, but she lost the use of her left leg. Specialists in Nashville recommended routine massage therapy for the limb, and Mrs. Rudolph learned it and taught it to some of the older children. Thus, Wilma's legs were massaged a number of times each day, helping her to regain strength. Rudolph's confidence may have flagged at times in her childhood when it seemed she might spend a lifetime in leg braces or even a wheelchair. Through the efforts of her devoted family—and her own steely determination to strengthen herself—she rose from disability to Olympic glory.

Staged a comeback from physical disability

After five years of treatment, Wilma one day stunned her doctors when she removed her leg braces and walked by herself. Soon she was joining her brothers and sisters in basketball games in the Rudolph backyard and running street races against other children her age. "By the time I was 12," she told the Chicago Tribune, "I was challenging every boy in our neighborhood at running, jumping, everything."

Rudolph desperately wanted to play high school basketball, but she simply could not convince the coach to put her on the team. When she finally worked up the nerve to ask him for a tryout, he agreed to coach her privately for ten minutes each morning. Still she was cut in her freshman year. She finally earned a position on the roster at Burt High School in Clarksville, Mississippi, because the coach wanted her older sister to play. Her father agreed to allow her sister to join the team only if Wilma was allowed to join, too.

Rudolph soon blossomed into a fine basketball player. As a sophomore she scored 803 points in twenty-five games, a new state record for a player on a girls' basketball team. She also started running in track meets and found that her greatest strengths lay in the sprint. She was only fourteen when she attracted the attention of Ed Temple, the women's track coach at Tennessee State University. Temple told her she had the potential to become a great runner, and during the summer breaks from high school she trained with him and the students at Tennessee State. 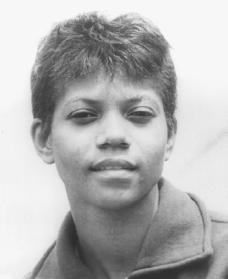 Wilma Rudolph.
Courtesy of the
Library of Congress
.

The Olympic Games were a far-off dream to a young African American woman in Tennessee. She was a teenager before she even learned what the Olympics were. Rudolph caught on fast, though. In four seasons of high school track meets, she never lost a race. At the tender age of sixteen, she qualified for the Summer Olympics in Melbourne, Australia, and came home with a bronze medal.

Rudolph entered Tennessee State University in the fall of 1957, with the intention of majoring in elementary education. All of her spare time was consumed by running, however. The pace took its toll, and she found herself too ill to run through most of the 1958 season. She rebounded in 1959, only to pull a muscle at a crucial meet between the United States and the Soviet Union, the former country made up of Russia and several smaller nations. Ed Temple, who would prove to be a lifelong friend, supervised her recovery, and by 1960 Rudolph was ready to go to Rome, Italy.

At the 1960 Olympics, Rudolph won all three of her gold medals in very dramatic fashion. In both the 100-meter dash and the 200-meter dash, she finished at least three yards in front of her closest competitor. She tied the world record in the 100-meter and set a new Olympic record in the 200. Rudolph also brought her 400-meter relay team from behind to win the gold. The French called her "La Gazelle." Without question, Rudolph's achievements at the 1960 Olympic Games remain a stand-out performance in the history of Olympic competition.

Wilma Rudolph became an instant celebrity in Europe and America. Crowds gathered wherever she was scheduled to run. She was given ticker tape parades, an official invitation to the White House by President John F. Kennedy (1917–1963), and a dizzying round of dinners, awards, and television appearances.

Rudolph made one decision that she stuck to firmly: she refused to participate in the 1964 Olympic games. She felt that she might not be able to duplicate her achievement of 1960, and she did not want to appear to be fading. She retired from amateur athletics in 1963, finished her college work, and became a school teacher and athletic coach. She also became a mother, raising four children on her own after two divorces.

For more than two decades, Wilma Rudolph sought to impart the lessons she learned about amateur athletics to other young men and women. She was the author of an autobiography, Wilma, which was published in 1977—and the subject of a television movie based on her book. She lectured in every part of America and even served in 1991 as an ambassador to the European celebration of the dismantling of the Berlin Wall, the wall that for three decades separated East from West Berlin, Germany. Rudolph helped to open and run inner-city sports clinics and served as a consultant to university track teams. She also founded her own organization, the Wilma Rudolph Foundation, dedicated to promoting amateur athletics.

Rudolph was a member of the United States Olympic Hall of Fame and the National Track and Field Hall of Fame. She traveled frequently and was well known for her motivational speeches to youngsters.

On November 12, 1994, Wilma Rudolph died at her home in Brentwood, Tennessee, of a brain tumor. She is survived by two sons, two daughters, six sisters, two brothers, and a truly inspirational legacy.

Thanx so much for the info i really appreacshited it for my report
:D
XD
2
taylor

She is an inspiration to me and all who have read about her.
3
Akhil sivan