The works of the Indian author Salman Rushdie often focused on outrages of history and particularly of religions. His book The Satanic Verses earned him a death sentence from the Iranian leader Ayatollah Ruhollah Khomeini (1900–1989).

Ahmed Salman Rushdie was born on June 19, 1947, in Bombay, India, the only son among Anis Ahmed Rushdie and Negin Butt's four children. His father was a businessman who had been educated at Cambridge University in England. Rushdie's childhood was happy and he was always surrounded by books. Rushdie remembers wanting to be a writer at age five. He was sent to England at age fourteen to attend Rugby, a private school. His fellow students tormented him both because he was Indian and because he had no athletic ability.

Rushdie later attended Cambridge, as his father had done, and his experience there was much more positive. He received his master's degree in history in 1968. After a brief career as an actor he worked as a free-lance advertising copywriter in England from 1970 to 1980. The experience of expatriation (living outside one's country of birth), which he shared with many writers of his generation who were born in the Third World, is an important theme in his work.

Rushdie's first published book, Grimus (1975), was classified as science fiction by many critics. It is the story of Flapping Eagle, a Native American who is given the gift of immortality (eternal life) and goes on a journey to find the meaning of life. Although the book received positive reviews, it did not sell very well. Rushdie continued working as a part-time ad writer over the five years it took him to write Midnight's Children. He quit his job after finishing the novel without even knowing if it would be published.

Released first in the United States in 1981, Midnight's Children is in part the story of a baby who was not only the result of an extramarital affair (an affair between a married person and someone other than his or her spouse) but who was then switched at birth with a second child from a similar situation. The hero is also caught between the two great Indian religions, Islam and Hinduism. Finally, he spends his life moving back and forth between the Indian republic and Pakistan. The book received rave reviews in the United States and was a popular and critical success in England. Rushdie followed this up with Shame (1983), the story of a Pakistani 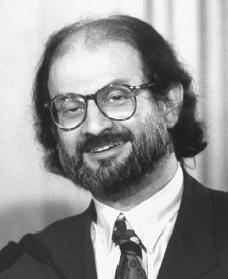 Salman Rushdie.
Reproduced by permission of
AP/Wide World Photos
.
woman, Sufiya Zinobia, who blushes so hotly with embarrassment at her nation's history that her body boils her bath water and burns the lips of men who attempt to kiss her.

Rushdie's The Satanic Verses (1988) opens with the survival of two Indian men who fall out of the sky after their jumbo jet to England is blown up in midair by terrorists. These two characters then gain divine and demonic powers. Rushdie's habit of using the atrocities of history—especially involving religion—made The Satanic Verses a book of frightening precognition (describing events that have not yet occurred): another character in the novel is a writer sentenced to death by a religious leader.

The title of the novel refers to verses from the Koran (the holy book of the Islamic faith), which were removed by later Islamic historians, describing a time when the Arab prophet (one with religious insight) Mohammed (the founder of Islam) briefly changed his belief in a single god and allowed mention to be made of three local goddesses. This was considered offensive and an insult to Islam by the Iranian leader Ayatollah Ruhollah Khomeini, who issued a fatwa, or religious order, calling for Rushdie's death. Rushdie went into hiding and received round-the-clock protection from British security guards. Rushdie's wife of thirteen months, author Marianne Wiggins, went into hiding with him when the death threat was announced. She soon emerged and announced that their marriage was over.

Khomeini's death threat extended not only to Rushdie himself, but to the publishers of The Satanic Verses, any bookseller who carried it, and any Muslim who publicly approved of its release. Several bookstores in England and America received bomb threats, and the novel was briefly removed from the shelves of America's largest book-selling chains. Two Islamic officials in London, England, were murdered for questioning the correctness of Rushdie's death sentence on a talk show. Many book-burnings were held throughout the world.

Rushdie himself, and his possible disguises in hiding, became the subject of many jokes. For example, during the 1990 Academy Awards presentation, which was seen worldwide by an estimated one billion viewers, comedian Billy Crystal (1947–) joked that "the lovely young woman" who usually hands Oscar statuettes to their recipients "is, of course, Salman Rushdie."

Working under a death sentence

In 1990 Rushdie released the fantasy (a made-up story) novel Haroun and the Sea of Stories, written for his son by his first marriage. That same year Rushdie publicly embraced Islam and apologized to those offended by the The Satanic Verses. He made several appearances in London bookstores to autograph his newest work. But even after the Ayatollah's death, his successor, Iran's President Hashemi Rafsanzani, refused to lift the death sentence. Rushdie continued to appear in public only occasionally, and then under heavy security.

Rushdie continued to live an isolated life. He remarried, however, and became a father for the second time. Occasionally he made radio appearances, but they were usually unannounced. Rushdie's novel entitled The Moor's Last Sigh was published in 1995. This book drew angry reactions from Hindu militants (those engaged in war) in India. In 1998, as part of an attempt to restore relations between Iran and England, the Iranian foreign minister, while repeating criticism of The Satanic Verses, announced that Iran had no intention of harming Rushdie or encouraging anyone to do so. A relieved Rushdie said he would end his nine years of seclusion.

In 1999 Rushdie published The Ground Beneath Her Feet, the story of a famous singer lost during an earthquake. Rushdie described it as "a novel of our age" in an interview with CNN's Jonathan Mann. In April 2000 Rushdie created a sensation by visiting India, his first visit to his birthplace since he was four years old. In November 2001 Rushdie told the Manchester Guardian that most Muslims' view of Islam is "jumbled" and "half-examined." He criticized Muslims for blaming "outsiders" for the world's problems and said that they needed to accept the changes in the modern world to truly achieve freedom.

Come to think of it ,Perhaps his family moved to Pakistan when he was 4 years old.