The Flemish painter and diplomat Peter Paul Rubens was one of the supreme geniuses in the history of painting.

Peter Paul Rubens was born to Jan Rubens and Maria Pypelinckx on June 28, 1577. Jan Rubens was a lawyer of Antwerp who, because of his religious preference, fled to Germany in 1568 to escape persecution. In Cologne, Germany, he had an affair with the wife of William the Silent, Prince of Orange, and as a result he was thrown into prison. Released after two years, due to the devoted efforts of his wife, Jan Rubens was allowed to live in Siegen, in Westphalia, Germany, where Peter Paul was born. The family lived for some years in Cologne until Jan Rubens died in 1587, at which time his widow returned to Antwerp, Belgium, bringing her three children with her.

After a period of schooling which included instruction in Latin and Greek, the young Rubens became a messenger to a noble-woman, Marguerite de Ligne, Countess of Lalaing. This early experience of court life, though he was glad to be released from it, was undoubtedly useful to the future artist, much of whose time would be passed in noble and royal circles. Returning to his home in Antwerp, he had decided to be a painter. He studied under three masters—Tobias Verhaecht, Adam van Noort, and Otto van Veen (1556–1629)—and in 1598 was accepted as a master in the Antwerp Guild of St. Luke, the painters' guild, or association.

In Rome, Italy, Rubens completed his education as an artist, studying with unfailing 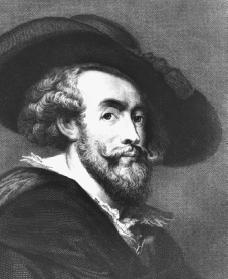 Peter Paul Rubens.
Reproduced by permission of the
Corbis Corporation
.
enthusiasm the sculptures of antiquity (the period before the sixth century) and especially the paintings of Raphael (1483–1520) and Michelangelo (1475–1564). During his first stay in Rome, from 1601 to 1602, he painted three altarpieces for the Church of Sta Croce in Gerusalemme (now in the Hospital at Grasse).

Late in 1605 Rubens was again in Rome; he decided to remain there for almost three years. During this time he was commissioned (hired) to decorate the high altar of Santa Maria in Vallicella—an extraordinary honor for a foreigner. His first solution, an altarpiece showing the Madonna and Child with St. Gregory and other saints (now in the Museum at Grenoble), did not make a good impression owing to unfavorable lighting conditions in the church, and he replaced it by a set of three pictures painted on slate. In October 1608, before this work had been unveiled, there came word that Rubens's mother was seriously ill, and the artist left at once for Antwerp. Though he did not know it at the time, he was never to see Italy again.

Rubens arrived at his home to learn that his mother had died before he left Rome. Although it was surely his intention to return to Italy, he soon found reasons for remaining in Antwerp. The Archduke Albert, the acting ruler of the Spanish Netherlands, appointed him court painter with special privileges. In October 1609 Rubens married Isabella Brant, and a year later he purchased a house in Antwerp. The charming painting Rubens and His Wife in the Honeysuckle Arbor was painted about this time.

The first big project to be undertaken after Rubens's return from Italy was the Raising of the Cross (1609–1611), a triptych, or three-paneled piece, for the church of St. Walburga (now in the Cathedral of Antwerp). With this bold and intensely dramatic work Rubens at once established himself as the leading master of the city. It was followed by another triptych, equally large and no less successful, the Descent from the Cross (1611–1614) in the Cathedral.

Rubens's workshop was now in full operation, and he was able, with the aid of his pupils and assistants, to achieve an astonishing output of pictures. The most brilliant of his assistants was Anthony Van Dyck (1599–1641), who entered his studio about 1617 or 1618 and who helped in the execution of a number of important commissions.

In 1620 Rubens was commissioned to execute a series of thirty-nine ceiling paintings for the Jesuit church in Antwerp. It was the largest decorative cycle that the artist had yet undertaken, and as such it called into play all his powers of invention and organization. The entire complex of ceiling paintings was destroyed by fire in 1718.

In 1622 Rubens was in Paris, France, to sign a contract for the decoration of two great galleries in the Luxembourg Palace, the residence of the queen mother, Marie de' Medici (1573–1642). The first of these projects, the incomparable series of twenty-one large canvases illustrating the life of Marie (now in the Louvre, Paris), was finished in 1625. The subject matter was decidedly unpromising, but Rubens succeeded in transforming the dreary history of the queen into a brilliant and spectacular one.

There were other decorative schemes to occupy Rubens's attention during this period. For King Louis XIII (1601–1643) of France he designed the tapestry series, the History of Constantine the Great, and several years later Infanta Isabella commissioned him to design an even larger tapestry cycle, the Triumph of the Eucharist, for the Convent of the Descalzas Reales in Madrid, Spain.

Rubens's diplomatic (having to do with international relations) activity, which had begun some time earlier, reached a peak in the years from 1628 to 1630, when he played an important part in bringing about peace between England and Spain. As the agent of the Infanta (the daughters of Spanish rulers), he went first to Spain, where in addition to carrying out his political duties he found a new and enthusiastic art patron (a supporter) in King Philip IV (1605–1665). His mission to England was equally successful. Charles I (1600–1649) knighted the artist-diplomat, and the University of Cambridge awarded him an honorary master of arts degree. Rubens returned to Antwerp in March 1630.

Isabella Brant, Rubens's first wife, had died in 1626. In December 1630 he married Helena Fourment, a girl of sixteen. Though he had hoped, on returning to Antwerp, to withdraw from political life, he acted once more as confidential agent for the Infanta in the frustrating and unsuccessful negotiations with the Dutch. At length he succeeded in being released from diplomatic employment. In 1635 he purchased a country estate, the Castle of Steen, located some miles south of Antwerp, and from there on divided his time between this country retreat and his studio in town.

In 1635, when the new governor of the Netherlands, Cardinal Infante Ferdinand, visited Antwerp, Rubens was given the task of preparing the temporary street decorations. Swiftly bringing together teams of artists and craftsmen to work from his designs, the master created an amazing series of painted theaters and victorious arches, which were far greater than expected in their magnificence. His last great project was a vast cycle of mythological (having to do with stories that are handed down through generations) paintings for the decoration of Philip IV's hunting lodge near Madrid, the Torre de la Parada.

Rubens was increasingly troubled by arthritis (a persistent swelling of the joints) toward the end of his life, which eventually persuaded him to give up painting altogether. One of the most moving paintings of the last years is the self-portrait in Vienna, in which the master, though already touched by suffering, wears an air of calm and peace. He died in Antwerp on May 30, 1640.

Really thank you abou this article, it helped me a lot and even more than i expected !
2
Seraphine

Thank you so much about this article. It has helped me infinitely. I was wondering around the web trying to find something and this caught my sight. It has information that is not challenging yet not too easy. It is altogether perfection! And again, thank you.
3
stepphanie

thanks for the information about the artist... im doing a paper on the painting he did called the raising of the cross and we need to know some history about the artists who we chose... this page was a big help... thank you