J. K. Rowling is an English author of novels for young people, and caused an overnight sensation with her first book, Harry Potter and the Philosopher's Stone (… Sorceror's Stone in the United States) , which rose to the top of the children's best-seller lists in 1998. Even before publication, publishers in the United States were competing for rights to the book, with the top bidder paying one hundred thousand dollars—the most ever for a first novel by a children's book author.

Born near Bristol, England, Joanne K. Rowling grew up with a younger sister and an intense interest in storytelling. Rabbits played a large part in her early tales, for Rowling and her sister badly wanted a rabbit. Her first story, at age five or six, involved a rabbit named, quite logically, Rabbit, who got the measles (a contagious virus that occurs in children) and visited his friend, a giant bee named Miss Bee. Rowling said in J. K. Rowling: The Wizard Behind Harry Potter , "Ever since Rabbit and Miss Bee, I have wanted to be a writer, though I rarely told anyone so. I was afraid they'd tell me I didn't have a hope."

Two moves took the Rowling family eventually to the town of Tutshill near Chepstow in the Forest of Dean along the border of England and Wales. This brought a longtime country-living dream to reality for Rowling's parents, both Londoners, and the nine-yearold Rowling learned to love the countryside. She and her sister could wander unsupervised amid the fields and play along the River Wye. Rowling once noted that the only problem with her new life was school. It was an old-fashioned school with roll-top desks and a teacher who frightened Rowling.

From Tutshill Primary, Rowling went to Wyedean Comprehensive School. A quiet and unathletic child, English was her favorite subject, and she created stories for her friends at lunchtime, tales involving heroic deeds. Contact lenses soon sorted out any feelings of inferiority in the young Rowling; writing became more impulsive and less of a hobby in her teenage years. Attending Exeter University, Rowling studied French after her parents had advised her that bilingualism (speaking two languages) would lead to a successful career as a secretary.

Working at Amnesty International, Rowling discovered one thing to like about life as a secretary: she could use the computer to type up her own stories during quiet times. At age twenty-six, Rowling gave up her office job to teach English in Portugal. It was there that she began yet another story that might become a 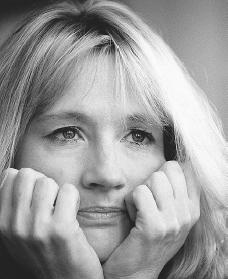 J. K. Rowling.
Reproduced by permission of
AP/Wide World Photos
.
book, about a boy who is sent off to wizard school. All during the time she spent in Portugal, Rowling took notes on this story and added bits and pieces to the life of her main character, Harry Potter. In Portugal she also met the man who became her husband, and they had a daughter. They later got divorced.

Of naps and "Harry Potter"

Back in England, Rowling decided to settle in Edinburgh and prepared to raise her daughter as a single mother. Accepting a job as a French teacher, she set herself a goal: to finish her novel before her teaching job began. This was no easy task with an active toddler in hand. Rowling confined her writing to her daughter's nap time, much of it spent in coffee-houses where the understanding management allowed her space for her papers. She was able to send off her typed manuscript to two publishers before beginning her teaching post, but it was not until several months later that the happy news arrived: her book, Harry Potter and the Philosopher's Stone, would be published in England. And then a few months later, the American rights were bought for an amazing price, and Rowling said good-bye to teaching.

Harry Potter, an orphan, has led a miserable life with the Dursley family, his aunt, uncle, and cousin, who force him to live in a broom closet under the stairs. Small, skinny, and wearing glasses, Harry is an unlikely hero. The only thing physically interesting about Harry is the lightning-shaped scar on his forehead. One day Harry gets a letter telling him that he has been admitted to Hogwarts School of Witchcraft and Wizardry. Thus begins the magical story of Harry Potter. Rayma Turton in Magpies called the book "a ripping yarn," and a "school story with a twist."

Even as enthusiastic reviews were pouring in from America, Rowling's second installment of the "Harry Potter" saga, Harry Potter and the Chamber of Secrets, was published in England to another rave review. The third installment of the series, Harry Potter and the Prisoner of Azkaban, begins when Harry is thirteen and starting his third year at Hogwarts School for Witchcraft and Wizardry. Harry's life-threatening adventures in The Prisoner of Azkaban, the fourth Harry Potter novel, indicated a subtle but distinct shift away from the lightheartedness that characterizes the first two novels. Such a shift was "inevitable," Rowling admitted in a School Library Journal interview. "If you are writing about Good and Evil, there comes a point where you have to get serious."

In November 2001, Harry Potter gained even more fame when Harry Potter and the Sorcerer's Stone graced the big screen as a major motion picture. Rowling's magical creations cast a spell over theatergoers as the movie was both a commercial and critical success. Rowling lives in Scotland with her daughter, Jessica, and second husband, Neil Murray, whom she married in December 2000. She is currently working on the remaining novels in the "Harry Potter" series.