Blaise Pascal was an influential mathematical writer, a master of the French language, and a great religious philosopher (a person who seeks wisdom). He began making contributions to mathematics at a very young age. The computer programming language "Pascal" is named after him.

Blaise Pascal was born at Clermont-Ferrand, France, on June 19, 1623. His father, Étienne, was a civil servant and served as king's counselor. Blaise's mother, Antoinette, died in 1626. Blaise was three years old at the time and had two sisters, Gilberte and Jacqueline. In 1631 the family moved to Paris, France.

Blaise's father did not like the way school was taught at that time and instructed all three children at home himself. He placed special emphasis on learning Latin and Greek. He did not expose Blaise to geometry because he felt the topic was too enticing and attractive. Geometry is the branch of mathematics that deals with points, lines, angles, surfaces, and solids. He thought that if exposed to geometry and mathematics too soon, Blaise would abandon the study of classics.

This ban on mathematics merely served to make Blaise even more curious. On his own he experimented with geometrical figures. He invented his own names for geometrical terms because he had not been taught the standard terms. Some people believe that 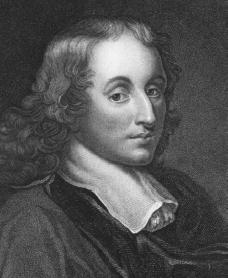 Blaise Pascal.
Courtesy of the
Library of Congress
.
Blaise was twelve years old when he started attending meetings of a mathematical academy with his father. Other scholars think that he did not attend the meetings until he was about sixteen. Whichever was the case, he was far younger than the adults who were there.

In 1640 the Pascal family moved to Rouen, France. Blaise was still taught mainly by his father. He worked very hard, but was frequently in poor health. During this time he developed a new theorem, or mathematical formula that can be proven, in geometry. He sometimes referred to this theorem as a "mystic hexagram." It was quite different from geometry that dealt with measured properties of figures. It was the foundation for an important, and, at the time, almost entirely undeveloped branch of mathematics.

In 1640, at age sixteen, Pascal wrote a book, Essay on Conics. It deals with the geometry of cones. He gave the mystic hexagram central importance in this book. At the age of nineteen, Pascal invented a calculating machine. It was able to add and subtract by having a person move a series of gears and cylinders. This was an early form of a computer.

In 1646 Pascal's father had an accident and was confined to his house. Some neighbors who were Jansenists came to visit him. The Jansenists were a religious group formed by Cornelius Jansen (1585–1638). Their beliefs were very different from the teachings of the Jesuits, who were the most influential group at the time. The Pascals began adopting the Jansenist beliefs. As a result, they received opposition from the local Jesuits.

After Étienne Pascal's death in 1651, Pascal's sister Jacqueline joined the Jansenists at their convent in Port Royal. Pascal continued to enjoy a more worldly life. He had a number of aristocratic (upper-class) and famous friends and money from his patrimony (inheritance) to support himself. In 1654, however, he completely converted to Jansenism, and joined his sister at the convent at Port Royal.

In 1655 the writer Antoine Arnauld (1612–1694) was formally condemned for heretical teaching, a teaching that opposed the standard beliefs of the church. Pascal decided to defend Arnauld. He wrote a series of pamphlets that were supposed to look like letters between two friends, one in the city and one in the country or provinces. They came to be known as The Provincial Letters and poked fun at the Jesuits. They were very popular. The Jesuits tried without success to find the author. The wit, reason, eloquence, and humor of the letters made the Jesuits a laughingstock (object of ridicule).

When Pascal died in 1662, he left behind an unfinished theological work (relating to religious faith and practices), the Pensées. This was an apology, or defense, for Christianity. It was published eight years later by the Port Royal community in a thoroughly garbled and incoherent form. A reasonably authentic version first appeared in 1844. It deals with the great problems of Christian thought, faith versus reason, and free will.

The Pensées, unlike the Provincial Letters, were not highly edited and polished. The Letters give Pascal a place in literary history as the first of several great French writers practicing polite irony (humor in which words are used to mean the opposite of their true meaning) and satire (making fun of human faults and weakness). In contrast, some people think that the feeling of the Pensées makes it seem that it could almost have been written by another man. In them, reason is supposedly made to take second place to religion. Both books, however, are recognized as being among the great volumes in the history of religious thought.

Little is known of Pascal's personal life after his entry into Port Royal. Some of Pascal's scientific and mathematical works were not published until after his death. His "Treatise on the Equilibrium of Liquids," and his work on the links between theories involving liquids and gases, were enormously important in providing knowledge to develop air compressors, vacuum pumps, and hydraulic (run by the pressure created by forcing liquid through a small opening) elevators. Although he never wrote at great length on mathematics after entering Port Royal, the many short pieces that do survive are almost always concise and incisive.

The mathematical theory of probability (whether something is more likely to happen or not) made its first great step forward when Pascal and Pierre de Fermat (1601–1665) began writing to one another. They found that they both had come to similar conclusions independently. Pascal planned a treatise (a formal explanation of a theory) on the subject, but again only a fragment survived. It was published after his death. Pascal suffered increasingly from head pains after 1658. He died on August 19, 1662.

Pascal published many of his theorems without providing proofs as a challenge to other mathematicians. Solutions were found by some of the best mathematicians of the time, all rising to do their best by Pascal's leadership. The computer programming language "Pascal" is named after Blaise Pascal in honor of his early contributions to the science of computing. Thus, the influence of Blaise Pascal lives on today.

McPherson, Joyce. A Piece of the Mountain: The Story of Blaise Pascal. Lebanon, TN: Greenleaf Press, 1997.

Are you sure thats right? Lots of other websites say the mothers name is different. But otherwise seems good. Gabi is a poo