Charlie Parker, American musician, was one of the most widely influential soloists in jazz history and one of the creators of a new style of playing called bop, or bebop. 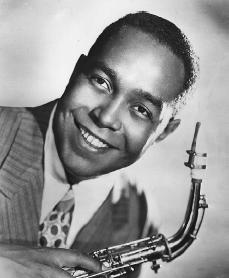 Charlie Parker.
Reproduced by permission of the
Corbis Corporation
.

Charles Christopher Parker Jr. was born in Kansas City, Kansas, on August 29, 1920, the only child of Charles and Addie Parker. The family moved to Kansas City, Missouri, in 1927. His mother, who raised him by herself after his father left the family, bought him a saxophone in 1931, and he started taking lessons in school. In the following years he played with several well-known local big bands, and in 1935 he left high school to become a full-time musician. By the age of fifteen Parker, known as "Yardbird" or "Bird" because of his love of eating chicken, was married and had begun using drugs. In 1941 he became a member of pianist Jay McShann's (1916–) band, with which he made his first commercial recordings.

Parker's earliest records reveal that he was already developing the more complicated musical approach that was characteristic of his mature work. This approach and his harsh tone made it difficult for the casual listener to follow the logic of his choruses. Also, with major changes taking place in the rhythm section, his music sometimes met with opposition or downright confusion. Parker played with extraordinary technical skill, which allowed him to express his ideas very clearly even at the most rapid tempo (the rate of speed of a musical piece).

At this time Parker also met and began performing with trumpet player Dizzy Gillespie (1917–1993), widely accepted as the cofounder with Parker of the jazz style that became known as bop or bebop (featuring complicated harmonies and quick tempos). In 1945 they recorded some of the greatest titles in the new style. Although younger musicians quickly realized Parker's genius, musicians who were older and more set in their ways did not approve of him or his playing. In 1946, as a result, Parker suffered a mental breakdown and was committed for six months to a sanitarium (an institution for rest and recovery). Upon his release he formed his own quintet (five-piece group) and performed with it for several years, mainly in the New York City area. He also toured with Norman Granz's "Jazz at the Philharmonic" and made trips to Paris, France, in 1949 and Scandinavia in 1950.

Parker composed a number of tunes that became jazz classics, though these were usually casually assembled items based on chord sequences of popular tunes. In terms of melodic skill, his recordings of ballads such as "Embraceable You" and "How Deep Is the Ocean" are even more revealing than his songs in the bebop style. Many other musicians imitated his playing, but his own achievements were unique.

In the last five years of Parker's life he was unable to work steadily as a result of physical and mental illness. On March 4, 1955, he made his final public appearance; he died eight days later in New York City.