The French chemist and biologist Louis Pasteur is famous for his germ theory and for the development of vaccines. He made major contributions to chemistry, medicine, and industry. His discovery that diseases are spread by microbes, which are living organisms—bacteria and viruses—that are invisible to the eye, saved countless lives all over the world.

Louis Pasteur was born on December 27, 1822, in the small town of Dôle, France. His father was a tanner, a person who prepares animal skins to be made into leather. The men in Pasteur's family had been tanners back to 1763, when his great-grandfather set up his own tanning business. Part of the tanning process relies on microbes (tiny living organisms). In tanning, microbes prepare the leather, allowing it to become soft and strong. Other common products such as beer, wine, bread, and cheese depend on microbes as well. Yet, at the time Pasteur was a child, few people knew that microbes existed.

Pasteur's parents, Jean-Joseph Pasteur and Jeanne Roqui, taught their children the values of family loyalty, respect for hard work, and financial security. Jean-Joseph, who had received little education himself, wanted his son to become a teacher at the local lycée (high school). Pasteur attended the École Primaire (primary school), and in 1831 entered the Collège d'Arboix. He was regarded as an average student, who showed some talent as an artist. Nonetheless, the headmaster encouraged Pasteur to prepare for the École Normale Supérieure, a very large training college for teachers located in Paris. With this encouragement he applied himself to his studies. He swept the school prizes during the 1837 and 1838 school year.

Pasteur went to Paris in 1838 at the age of sixteen. His goal was to study and prepare for entering the École Normale. Yet, he returned to Arboix less than a month later, overwhelmed with homesickness. In August of 1840 he received his bachelor's degree in letters from the Collège Royal de Besançon and was appointed to tutor at the Collège. In 1842, at age twenty, he received his bachelor's degree in science. He then returned to Paris, and was admitted to the École Normale in the autumn of 1843. His doctoral thesis (a long essay resulting from original work in college) was on crystallography, the study of forms and structures of crystals.

In 1848, while professor of physics at the lycée of Tournon, the minister of education granted Pasteur special permission for a leave of absence. During this time, Pasteur studied how certain crystals affect light. He became famous for this work. The French government made him a member of the Legion of Honor and Britain's Royal Society presented him with the Copley Medal.

In 1852 Pasteur became chairman of the chemistry department at the University of Strasbourg, in Strasbourg, France. Here he began studying fermentation, a type of chemical process in which sugars are turned into alcohol. His work resulted in tremendous improvements in the brewing of beer and the making of wine. He also married at this time.

In 1854, at the age of thirty-one, Pasteur became professor of chemistry and dean of sciences at the new University of Lille. Soon after his arrival at Lille, a producer of vinegar from beet juice requested Pasteur's help. The vinegar producer could not understand why his vinegar sometimes spoiled and wanted to know how to prevent it.

Pasteur examined the beet juice under his microscope. He discovered it contained alcohol and yeast. The yeast was causing the 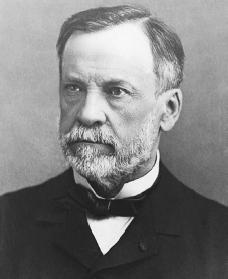 Louis Pasteur.
Reproduced by permission of the
Corbis Corporation
.
beet juice to ferment. Pasteur then demonstrated that controlled heating of the beet juice destroyed the yeast, and prevented fermentation. This process, called "pasteurization," was eventually applied to preserve a number of foods such as cheese and milk. It also became the basis for dramatically reducing infection in the operating room.

In 1865 Pasteur was asked to help the ailing silk industry in France. An epidemic among silkworms was ruining it. He took his microscope to the south of France and set to work. Four months later he had isolated the microorganism causing the disease. After three years of intensive work he suggested methods for bringing it under control.

The theory of microbial disease

Pasteur's scientific triumphs coincided with personal and national tragedy. In 1865 his father died. His two daughters were lost to typhoid fever in 1866. Overworked and grief-stricken, Pasteur suffered a cerebral hemorrhage (a bleeding caused by a broken blood vessel in the brain) in 1868. Part of his left arm and leg were permanently paralyzed. Nevertheless, he pressed on.

Pasteur saw the trains of wounded men coming home from the Franco-German War (1870–71; war fought to prevent unification under German rule). He urged the military medical corps to adopt his theory that disease and infection were caused by microbes. The military medical corps unwillingly agreed to sterilize their instruments and bandages, treating them with heat to kill microbes. The results were spectacular, and in 1873 Pasteur was made a member of the French Academy of Medicine—a remarkable accomplishment for a man without a formal medical degree.

A particularly devastating outbreak of anthrax, a killer plague that affected cattle and sheep, broke out between 1876 and 1877. The anthrax bacillus (a type of microbe shaped like a rod) had already been identified by Robert Koch (1843–1910) in 1876. It had been argued that the bacillus did not carry the disease, but that a toxic (poisonous) substance associated with it did. Pasteur proved that the bacillus itself was the disease agent, or the carrier of the disease.

In 1881 Pasteur had convincing evidence that gentle heating of anthrax bacilli could so weaken its strength that it could be used to inoculate animals. Inoculation is a process of introducing a weakened disease agent into the body. The body gets a mild form of the disease, but becomes immunized (strengthened against) the actual disease. Pasteur inoculated one group of sheep with the vaccine and left another untreated. He then injected both groups with the anthrax bacillus. The untreated sheep died and the treated sheep lived.

Pasteur also used inoculation to conquer rabies. Rabies is a fatal disease of animals, particularly dogs, which is transmitted to humans through a bite. It took five years to isolate and culture the rabies virus microbe. Finally, in 1884, in collaboration with other investigators, Pasteur perfected a method of growing the virus in the tissues of rabbits. The virus could be weakened by exposing it to sterile air. A vaccine, or weakened form of the microbe, could then be prepared for injection. The success of this method was greeted with excitement all over the world.

The question soon arose as to how the rabies vaccine would act on humans. In 1885 a nine-year-old boy, Joseph Meister, was brought to Pasteur. He was suffering from fourteen bites from a rabid dog. With the agreement of the child's physician, Pasteur began his treatment with the vaccine. The injections continued over a twelve-day period, and the child recovered.

Honors from the world

In 1888 a grateful France founded the Pasteur Institute. It was destined to become one of the most productive centers of biological study in the world.

In 1892 Pasteur's seventieth birthday was the occasion of a national holiday. A huge celebration was held at the Sorbonne. Unfortunately Pasteur was too weak to speak to the delegates who had gathered from all over the world. His son read his speech, which ended: "Gentlemen, you bring me the greatest happiness that can be experienced by a man whose invincible belief is that science and peace will triumph over ignorance and war.… Have faith that in the long run … the future will belong not to the conquerors but to the saviors of mankind."

On September 28, 1895, Pasteur died in Paris. His last words were: "One must work; one must work. I have done what I could." He was buried in a crypt in the Pasteur Institute. Years later Joseph Meister, the boy Pasteur saved from rabies, worked as a guard at his tomb.

I think you need to add something about the children of Pasteur!
2
Kris

I think you could have added more things about his wife and children.
3
Gina

I agree with the comments above, but this did help plenty.
4
Joshua

can you please tell me how he died?That's what i need to find but i just cant find it...
5
m&m

I think you should write about what people were doing after he died.
6
Tyler

I think you could have added more things about his wife and children.
7
leo

what were his political views and also how did he die??