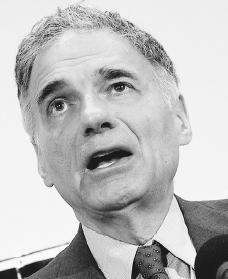 American social crusader and lawyer Ralph Nader became a symbol of the public's concern over the business practices of large corporations. He inspired investigations that were meant to improve the operations of industries and government bureaus. He also ran for president and tried to bring about changes in the elective process to provide voters with more choices.

Ralph Nader was born on February 27, 1934, in Winsted, Connecticut, the youngest of four children of Nadra and Rose (Bouziane) Nader, Lebanese immigrants who operated a local restaurant and bakery. His parents led the family in political discussions every night around the dinner table. His father was against any kind of injustice and insisted that every person had an obligation to try to make the world a better place.

Nader was interested in the law at an early age; he loved reading copies of the Congressional Record (printed speeches of members of Congress) that his high-school principal gave him. He graduated from Princeton University's Woodrow Wilson School of Public and International Affairs in 1955 and then went to Harvard Law School, receiving his degree in 1958. His role as an activist began developing during college. While at Princeton he attempted, but failed, to stop the spraying of campus trees with a pesticide (spray to kill insects) called DDT. He considered pesticides to be dangerous and harmful to the environment. Nader served briefly in the U.S. Army, traveled, then opened a law office in Hartford, Connecticut. He also lectured in history and government at the University of Hartford.

Nader was one among many concerned about safety in auto design. While still at Harvard, he had studied auto injury cases and came to believe that design flaws, rather than driver mistakes, were responsible for the large numbers of car accidents. He testified on the subject before state legislative committees and wrote articles for magazines. In 1964 Nader was appointed a consultant (a person who provides professional advice or services) to the Department of Labor and began to study auto safety in depth. He also worked with the Government Operations Subcommittee headed by Senator Abraham A. Ribicoff (1910–1998), providing it with data on auto accidents. In 1965 he left the department to prepare a book on the subject.

Nader's book Unsafe at Any Speed: The Designed-in Dangers of the American Automobile (1965) appeared while Ribicoff's committee was holding hearings on the subject of auto safety. Nader, after testifying before the committee, became a target of auto manufacturers then dealing with lawsuits by victims of auto accidents who blamed it on bad car designs. Although new safety laws would have eventually been established, the issue attracted public interest after Nader revealed that he had been personally harassed and his private life investigated by detectives working for General Motors. The admission in March 1966 by General Motors president James M. Roche that his firm had indeed had Nader investigated received national television coverage and made Nader a public figure. These events helped speed up the process of establishing new auto safety laws. In 1966, the National Traffic and Motor Vehicle Safety Act was passed. Nader's book became a best-seller and a factor in the new safety legislation becoming law in September. He broadened his investigations of the auto industry and the National Traffic Safety Agency, which was responsible for enforcing the new law. In November he sued General Motors for $26 million for invasion of privacy.

Nader then began a series of studies in various fields aimed at improving responsible industrial production. These included safety in mines and control of oil and gas pipes that were dangerous to people and the environment. Nader also worked on behalf of what became the 1967 Wholesome Meat Act. By being careful with his money, working efficiently, and using his income from book sales, article writing, and lectures, Nader attracted over a hundred young people—soon known as "Nader's Raiders"—from law schools and elsewhere. They helped him gather data about industries and government bureaus. In 1969 he founded his Center for the Study of Responsive Law (an organization that conducts research and publishes reports about consumer issues). In August 1970 Nader was awarded $425,000 from his lawsuit against General Motors, funds he promptly put into his crusade.

From the late 1970s through the early 1990s, Nader's public image faded from his Unsafe at Any Speed days. By 1988, however, he campaigned successfully to reduce California car-insurance rates and used public opinion to help block a proposed 50-percent pay hike for members of Congress. He gained notoriety in 1990 when a Forbes magazine story accused him of working together with trial lawyers for supporting Americans' right to sue. The criticism failed to stop him from looking into other issues; he soon turned his attention to investigating safety flaws in the airline industry. But his book on the subject, Collision Course: The Truth About Airline Safety, with Wesley J. Smith (1949–), was criticized by some for its questionable use of data.

After failing to stop the North American Free Trade Agreement (1993; an agreement between Canada, Mexico, and the United States to reduce tariffs and eliminate other barriers to trade), Nader was nominated as the 1996 Green Party (a political party that focuses mainly on ecological and environmental issues) candidate for president, winning some support in popular polls. Nader himself summed up his philosophy this way: "You've got to keep the pressure on, even if you lose." In 1997 Nader again teamed with Wesley J. Smith to write No Contest: Corporate Lawyers and the Perversion of Justice in America. The book explored the business of law in which, the authors suggested, profit is more important than justice. In 1988 Nader launched Commercial Alert, an organization that fights against harmful and excessive advertising and marketing.

In June 2000 Nader again accepted the presidential nomination of the Green Party. He promised to run a campaign that focused on policies to address the gap between the rich and the poor, improve health insurance for all Americans, and challenge corporations to end practices that waste the country's resources and harm the environment. He argued that since he could see no real difference between George W. Bush (1946–) and Al Gore (1948–), the Republican and Democratic candidates, the two-party system did not give voters enough choice. Nader wound up with only 3 percent of the vote, but in one of the closest elections ever, Democrats criticized him for taking votes away from Gore and causing Bush to win key states and, therefore, the election. Nader shrugged off the criticism and went back to work to strengthen the Green Party and prepare for the next round of elections.

My family once rented an upstairs apartment from his family circa 1964. We lived in Winsted, CT, for less than a year. I was trying to read up on his siblings. I don't see any names and dates for them. Also, did Ralph ever marry? Can I assume that he has retired? Our family never met Ralph, only his father and a brother, but don't know his name. My parents are deceased now, so I can't ask them. Thanks for such a nice article.
2
Richard

How many children did Ralph Nader have? Did children have cystic fibrosis