Russian-born American poet, fiction writer, and butterfly expert Vladimir Nabokov, most famous for the novel Lolita, noted for his dramatic descriptions, experimental style, and carefully structured plots, was one of the most highly acclaimed novelists of his time.

Vladimir Nabokov was born in St. Petersburg, Russia, on April 23, 1899, one of Vladimir Dmitrievich Nabokov and Helene Rukavishnikov Nabokov's five children. Nabokov's parents were wealthy and encouraged him to develop his imagination. He studied languages, mathematics, puzzles, and games, including chess, soccer, and boxing. He was educated by private tutors and read English before he read Russian. He entered Prince Tenishev School in St. Petersburg at age eleven. Interested in butterflies his entire life, he became a recognized authority on the subject while still young. Nabokov began writing poems when he was thirteen years old and, as he described it, "the numb fury of 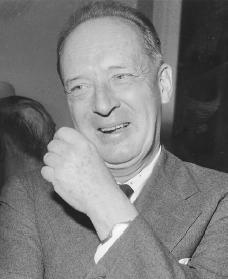 Vladimir Nabokov.
Reproduced by permission of
AP/Wide World Photos
.
verse making first came over me." His first book of poetry was published in 1914.

Nabokov's father, a lawyer and newspaper editor, was part of a failed movement to establish democracy (a system of government where the people rule) in Russia. The family lost its land and fortune after the Russian Revolution (a Communist overthrow of the government) in 1917 and fled to London, England, where Nabokov entered Cambridge University in 1919. Nabokov graduated in 1922 and rejoined his family in Berlin, Germany, where his father was shot to death by a monarchist (a believer in absolute rule by a single person).

Nabokov married Vera Slonim in 1925. They had one son, Dmitri, who later became an opera singer. In Berlin Nabokov taught boxing, tennis, and languages and constructed crossword puzzles. He began writing under the name "V. Sirin," selling stories, poems, and essays to Russian-language newspapers in Berlin and then Paris, France. His work included translating different stories and poems into Russian and writing short stories, plays, novels, and criticism. In 1940 he moved to the United States.

In 1940 Nabokov taught languages at Stanford University in California. From 1941 to 1948 he taught at Wellesley College in Massachusetts, where he became a professor of literature. He also did research in entomology (the study of insects) at the Museum of Comparative Zoology at Harvard University in Massachusetts from 1942 to 1948. He later discovered several species of butterflies, including "Nabokov's wood nymph." While teaching he wrote The Real Life of Sebastian Knight (1941), a parody (humorous imitation) of a mystery story whose hero is based on the author's own life. In 1944 he completed a study of the life of Russian author Nicolai Gogol (1809–1852). Nabokov became an American citizen in 1945. By then his stories were appearing regularly in popular magazines.

Nabokov's 1947 novel Bend Sinister is about an intellectual's battle with a police state. In 1949 Nabokov was appointed professor of Russian and European literature at Cornell University in New York, where he taught until 1959. He wrote a book of memories of his life in Russia, Speak, Memory, in 1951. Several short sketches published in the New Yorker were put together in Pnin (1957), his novel about a Russian teaching at an American university.

Nabokov remained unknown to the general public until writing Lolita, a sad but funny account of Humbert Humbert, a middle-aged professor who falls for a twelve-year-old schoolgirl. It was first published in Paris in 1955. After its American release in 1958, some U.S. libraries banned it. The publicity helped the book become immensely popular. Nabokov also wrote the screenplay (the script for a movie) for the 1962 movie version of the book. With profits from the novel and the film, Nabokov was able to quit teaching and devote himself entirely to his writing and butterfly hunting.

In 1959 Nabokov published Invitation to a Beheading, a story of a man awaiting execution, which he had first written in Russian in 1938. In 1960 he moved his family to Montreux, Switzerland. He received critical praise for Pale Fire (1962), written as a 999-line poem with a long speech by an unstable New England scholar who is actually a mythical king in exile.

In 1963 Nabokov's English translation of Alexander Pushkin's (1799–1837) romantic novel Eugene Onegin was published. Nabokov called the four-volume work his "labor of love." Several translations of earlier Russian works followed, including The Defense, a novel about chess. Nabokov constructed his novels like puzzles, rather than working from beginning to end. In 1964 he told Life magazine, "Writing has always been for me a torture and a pastime." Nabokov died on July 2, 1977, at the Palace Hotel in Montreaux.

In April 2000 Nabokov's Butterflies: Unpublished and Uncollected Writings, which contained fiction, poems, nonfiction, and writings related to Nabokov's love of butterflies, was published. Dmitri Nabokov translated it from Russian.