Benito Mussolini was head of the Italian government from 1922 to 1943. He was the founder of fascism, and as a dictator he held absolute power and severely mistreated his citizens and his country. He led Italy into three straight wars, the last of which led to his overthrow by his own people.

Benito Mussolini was born at Dovia di Predappio, Italy, on July 29, 1883. The Mussolinis were a poor family who lived in a crowded two-bedroom apartment. His father was a blacksmith and a follower of socialism (a system providing for the sharing of land and goods equally among all people); his mother taught elementary school. Benito, although intelligent, was violent and had a large ego. He was a poor student at school and learned very little. As a student at a boarding school in Faenza, Italy, Mussolini stabbed another student, and as a result he was expelled. After receiving his diploma in 1901 he briefly taught secondary school. He went to Switzerland in 1902 to avoid military service, where he associated with other socialists. Mussolini returned to Italy in 1904, spent time in the military, and engaged in politics full time thereafter.

Mussolini had become a member of the Socialist Party in 1900 and had begun to attract wide admiration. In speeches and articles he was extreme and violent, urging revolution at any cost, but he was also well spoken. Mussolini held several posts as editor and labor leader until he emerged in the 1912 Socialist Party Congress. He became editor of the party's daily paper, Avanti, at the age of twenty-nine. His powerful writing injected excitement into the Socialist ranks. In a party that had accomplished little in recent years, his youth and his intense nature was an advantage. He called for revolution at a time when revolutionary feelings were sweeping the country.

From Socialist to Fascist

Mussolini deserted the Socialist Party in 1914 to cross over to the enemy camp, the Italian middle class. He knew that World War I (1914–18) would bury the old Europe, and he began to prepare for "the unknown." In late 1914 he founded an independent newspaper, Popolo d'Italia, and backed it up with his own movement, the Autonomous Fascists. He drew close to the new forces in Italian politics, the extreme middle-class youth, and he made himself their spokesman. The Italian working class now called Mussolini "Judas" and "traitor." Mussolini was wounded during army training in 1917, but he managed to return to politics that same year. His newspaper, which he now backed with a second political movement, Revolutionary Fascists, was his main strength. After the war, Mussolini's career declined. He organized his third movement, Constituent Fascists, in 1918, but it did not survive. Mussolini ran for office in the 1919 parliamentary elections but was defeated. 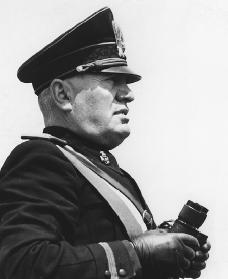 In March 1919 Mussolini founded another movement, Fighting Fascists, won the favor of the Italian youth, and waited for events to favor him. The elections in 1921 sent him to Parliament at the head of thirty-five Fascist deputies; the third assembly of his movement gave birth to a national party, the National Fascist Party, with more than 250 thousand followers and Mussolini as its uncontested leader. In October 1922 Mussolini successfully marched into Rome, Italy. He now enjoyed the support of key groups (industry, farmers, military, and church), whose members accepted Mussolini's solution to their problems: organize middle-class youth, control workers harshly, and set up a tough central government to restore "law and order." Thereafter, Mussolini attacked the workers and spilled their blood over Italy. It was the complete opposite of his early views of socialism.

Once in power, Mussolini took steps to remain there. He set general elections, but they were fixed to always provide him with an absolute majority in Parliament. The assassination of the Socialist leader Giacomo Matteotti, a noted opponent, by Fascist followers reversed his fortunes and nearly brought him down. Mussolini, however, recovered. He suspended civil liberties, destroyed all opposition, and imposed open dictatorship (absolute rule). In 1929 his Concordat with the Vatican settled the historic differences between the Italian state and the Roman Catholic Church. Pope Pius XI (1857–1939) said that Mussolini had been sent "by Divine Providence."

As the 1930s began, Mussolini was seated safely in power and enjoyed wide support. The strongest groups who had put Mussolini into power now profited from it. However, the living standard of the working majority fell; the average Italian worker's income amounted to one-half of that of a worker in France, one-third of that of a worker in England, and one-fourth of that of a worker in America. As national leader, Mussolini offered no solutions for Italy's problems. He surrounded himself with ambitious and greedy people and let them bleed Italy dry while his secret agents gathered information on opponents.

In 1930 economic depression (a decline in the production of goods because of a decline in demand, accompanied by rising unemployment) arrived in Italy. Mussolini reacted at first with a public works program but soon shifted to foreign adventure. The 1935 Ethiopian War was planned to direct attention away from internal problems. The "Italian Empire," Mussolini's creation, was announced in 1936. The 1936 Spanish intervention, in which Mussolini aided Francisco Franco (1892–1975) in Spain's civil war, followed but had no benefit for Italy. Mussolini then joined forces with German dictator Adolf Hitler (1889–1945) and in 1938 began to attack Jewish people within the country just as Germany was doing. As the 1930s ended, Mussolini was losing all his support within Italy.

The outbreak of World War II (1939–45) left Mussolini an unimportant figure in world politics, and he worried that Hitler would redraw the map of Europe without him. He decided "to make war at any cost." The cost was clear: modern industry, modern armies, and popular support. Mussolini lacked all of these. Nonetheless, in 1940 he pushed Italy into war against the will of the people, ignoring the only meaningful lesson of World War I: the United States alone had decided that conflict, and therefore America, not Germany, was the most important power.

In 1940–41 Mussolini's armies, badly supplied and poorly led, suffered defeats from Europe across the Mediterranean to the African continent. Italy lost its war in 1942; Mussolini's power collapsed six months later. Restored as Hitler's puppet in northern Italy in 1943, he drove Italy deeper into invasion, occupation, and civil war during 1944 and 1945. The end approached, but Mussolini struggled to survive. He was finally executed by a firing squad on April 28, 1945, at Dongo in Como province.

very useful and brief :) helped me greatly with my assignemnt!
2
tee

SICK! this was so helpful with my english assignment thanks :)
i like it how its straight to the point,short and brief :)
3
supa pig

was realy helpful on my essay so keep up da good work on the page!!! :)
4
Antonio

well this info seemed to help me a ton. 5/5(if ratable) gracias senores : )
5
ALSKDJ

This helped me on my S.S Project! I am Italian so it helps
6
Brittany

This website was great but it would be nice if it would add the names of his speeches.
7
dan007

Mussolini was killed then he and his mistres were hung by there feet and drug through the streets and beaten by the poeple. They werent killed by a firing squad. Everything else is great. it helped me a ton. Just thought I'd let you know about that one fact. thanks alot
9
Davi

This really helped me in my research esspecially Mussolini's disgraceful end and his dictatorial leadership.