Napoleon Bonaparte, French emperor, was one of the greatest military leaders in history. He helped remake the map of Europe and established many government and legal reforms, but constant battles eventually led to his downfall.

Napoleon Bonaparte was born Napoleon Buonaparte on August 15, 1769, in the Corsican city of Ajaccio. He was the fourth of eleven children of Carlo Buonaparte and Letizia Romolino. His father, a member of a noble Italian family, remained on good terms with the French when they took over control of Corsica.

Napoleon began his education at a boys' school in Ajaccio. Then, at age ten, he was allowed to enter French military schools for aristocrats and was sent in 1779, with his older brother Joseph, to the College of Autun in Burgundy, France. Napoleon later transferred to the College of Brienne, another French military school. While at school in France, he was made fun of by the other students for his lower social standing and because he spoke Spanish and did not know French well. His small size earned him the nickname of the "Little Corporal." Despite this teasing, Napoleon received an excellent education. When his father died, Napoleon led his household.

By 1785 Napoleon was a second lieutenant in the French army, but he often returned to Corsica. In 1792 he took part in a power struggle between forces supporting Pasquale Paoli (1725–1807), a leader in the fight for Corsican independence, and those supporting the French. After Paoli was victorious, he turned against Napoleon and the Bonaparte family, forcing them to flee back to France. Napoleon then turned his attention to a career in the army there. The French Revolution (1789–93), a movement to overthrow King Louis XVI (1754–1793) and establish a republic, had begun. Upon his return from Corsica in 1793, Napoleon made a name for himself and won a promotion by helping to defeat the British at Toulon and regain that territory for France.

After being imprisoned for ten days on suspicion of treason and refusing assignment to lead the Army of the West, Napoleon was assigned to work for the map department of the French war office. His military career nearly ended, but when forces loyal to the king attempted to regain power in Paris in 1795, Napoleon was called in to stop the 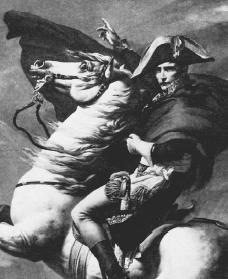 Napoleon Bonaparte.
uprising. As a reward he was appointed commander of the Army of the Interior. Later that year Napoleon met Josephine de Beauharnais (1763–1814), and they were married in March 1796. Within a few days Napoleon left Josephine in Paris and started his new command of the Army of Italy. Soon the French troops were winning battle after battle against the Italians and Austrians. Napoleon advanced on Vienna, Austria, and engineered the signing of a treaty that gave France control of Italy.

Napoleon returned to Paris a hero, and he soon decided to invade Egypt. He sailed from Toulon, France, in May 1798 with an army of thirty-five thousand men. With only a few losses, all of lower Egypt came under Napoleon's control. He set about reorganizing the government, the postal service, and the system for collecting taxes. He also helped build new hospitals for the poor. However, at this time a group of countries had banded together to oppose France. Austrian and Russian forces had regained control of almost all of Italy. Then, in August 1798, the British destroyed French ships in the Battle of the Nile, leaving the French army cut off from its homeland. Napoleon left the army under the command of General Jean Kléber and returned to France with a handful of officers.

Landing at Fréjus, France, in October 1799, Napoleon went directly to Paris, where he helped overthrow the Directory, a five-man executive body that had replaced the king. Napoleon was named first consul, or head of the government, and he received almost unlimited powers. After Austria and England ignored his calls for peace, he led an army into Italy and defeated the Austrians in the Battle of Marengo (1800). This brought Italy back under French control. The Treaty of Amiens in March 1802 ended the war with England for the time being. Napoleon also restored harmony between the Roman Catholic Church and the French government. He improved conditions within France as well by, among other things, establishing the Bank of France, reorganizing education, and reforming France's legal system with a new set of laws known as the Code Napoleon.

By 1802 the popular Napoleon was given the position of first consul for life, with the right to name his replacement. In 1804 he had his title changed to emperor. War resumed after a new coalition was formed against France. In 1805 the British destroyed French naval power in the Battle of Trafalgar. Napoleon, however, was able to defeat Russia and Austria in the Battle of Austerlitz. In 1806 Napoleon's forces destroyed the Prussian army; after the Russians came to the aid of Prussia and were defeated themselves, Alexander I (1777–1825) of Russia made peace at Tilsit in June 1807. Napoleon was now free to reorganize western and central Europe as he pleased. After Sweden was defeated in 1808 with Russia's help, only England remained to oppose Napoleon.

Napoleon was unable to invade England because of its superior naval forces. He decided to introduce the Continental System, a blockade designed to close all the ports of Europe to British trade. He hoped this would force the British to make peace on French terms. In Spain in 1808 the Peninsular War broke out over Spanish opposition to the placement of Napoleon's brother Joseph on the throne. The English helped Spain in this battle, which kept French troops occupied until 1814. In addition, Alexander I's decision to end Russia's cooperation with the Continental System led Napoleon to launch an invasion of that country in 1812. Lack of supplies, cold weather, and disease led to the deaths of five hundred thousand of Napoleon's troops.

Napoleon had his marriage to Josephine dissolved and then, in March 1810, he married Marie Louise, the daughter of Emperor Francis II of Austria. Despite this union, Austria declared war on him in 1813. In March 1814 Paris fell to a coalition made up of Britain, Prussia, Sweden, and Austria. Napoleon stepped down in April. Louis XVIII (1755–1824), the brother of Louis XVI, was placed on the French throne. Napoleon was exiled to the island of Elba, but after ten months he made plans to return to power. He landed in southern France in February 1815 with 1,050 soldiers and marched to Paris, where he reinstated himself to power. Louis XVIII fled, and Napoleon's new reign began. The other European powers gathered to oppose him, and Napoleon was forced to return to war.

The Battle of Waterloo was over within a week. On June 18, 1815, the combined British and Prussian armies defeated Napoleon. He returned to Paris and stepped down for a second time on June 22. He had held power for exactly one hundred days. Napoleon at first planned to go to America, but he surrendered to the British on July 3. He was sent into exile on the island of St. Helena in the South Atlantic Ocean. There he spent his remaining years until he died of cancer on May 5, 1821.

gotta love napoleon. what a great guy. could use more info, though. this has a lot of wars but not personal life or personality
2
a

Nice article but would like more details of the battle of waterloo.
3
ivan pettit

What happened to Napoleons two sons? One to Marie and one to his mistress.
4
Richard

I thought Napoleon was a great military leader, but a horrible ruler. He increased taxes, and did not really care about his subjects. Napoleon was a ruthless leader that thought he could become the next Alexander the Great, but he failed to think logically like Alexander did.
5
Sharanu

Great Napoleon but his reforms only in France? P lease send the answer
6
Jan rogers