The Norwegian painter and graphic artist Edvard Munch illustrated man's emotional life in love and death. His art was a major influence of the expressionist movement, in which where artists sought to give rise to emotional responses.

Born on December 12, 1863, in Loieten, near Kristiania (now Oslo), Norway, Edvard Munch was the son of a military doctor. Childhood experiences with death and sickness—both his mother and sister died of tuberculosis (an often-fatal disease that attacks the lungs and bones)—greatly influenced his emotional and intellectual development. This and his father's fanatic Christianity led Munch to view his life as dominated by the "twin black angels of insanity and disease."

After studying engineering, Munch soon turned to art. In 1880 Munch began to study art and joined the realist painters (school of painters who sought to depict their subjects as realistically as possible) and writers of the Kristiania bohemian (fashionable and unconventional) circle. His ideas were strongly influenced at this time by the writer Hans Jaeger (1854–1910), who sought to establish an ideal society based on materialist atheism (not believing in material wealth) and free love. Jaeger's hopeless love affair with the wife of Christian Krohg, leader of the bohemian painters, and Munch's own brief affairs caused him to intensify the connection he saw between women, love, and death.

Munch's paintings during the 1880s were dominated by his desire to use the artistic vocabulary of realism to create subjective content, or content open to interpretation of the viewer. His Sick Child (1885–1886), which used a motif (dominant theme) popular among Norwegian realist artists, created through color a mood of depression that served as a memorial to his dead sister. Because of universal critical rejection, Munch turned briefly to a more mainstream style, and through the large painting Spring (1889), a more academic version of the Sick Child, he obtained state support for study in France.

After studying briefly at a Parisian art school, Munch began to explore the possibilities made available by the French postimpressionists, a movement that looked to push impressionism beyond its limitations. The death of his father in 1889 caused a major spiritual crisis, and he soon rejected Jaeger's philosophy. Munch's Night in St. Cloud (1890) embodied a renewed interest in spiritual content; this painting served as a memorial to his father by presenting the artist's dejected state of mind. He summarized his intentions, saying "I paint not what I see, but what I saw," and identified his paintings as "symbolism: nature 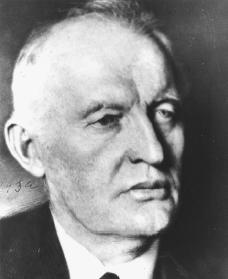 Edvard Munch.
Reproduced by permission of the
Corbis Corporation
.
viewed through a temperament" (manner of thinking). Both statements accent the transformation of nature as the artist experienced it.

In 1892 the Berlin Artists' Association, an official organization consisting primarily of German academic artists, invited Munch to exhibit in Berlin, Germany. His paintings created a major scandal in Germany's artistic capital, and the exhibition was closed. But Munch used the publicity to arrange other exhibitions and sell paintings; his art prospered and he decided to stay in Germany. He also began work on a series of paintings later entitled the Frieze of Life, which concentrated on the themes of love, anxiety, and death.

To make his work accessible to a larger public, Munch began making prints (works of art that could be easily copied) in 1894. Motifs for his prints were usually derived from his paintings, particularly the Frieze. The Frieze also served as the inspiration for the paintings he made for Max Linde (1904), Max Reinhardt's Kammerspielhaus (1907), and the Freia Chocolate Factory in Oslo (1922).

Following a nervous breakdown, Munch entered a hospital in Copenhagen, Denmark, in 1908. In the lithograph (a type of print) series Alpha and Omega he depicted his love affairs and his relationship to friends and enemies. In 1909 he returned to Norway to lead an isolated life. He sought new artistic motifs in the Norwegian landscape and in the activities of farmers and laborers. A more optimistic view of life briefly replaced his former anxiety, and this new life view attained monumental expression in the murals of the Oslo University Aula (1911–1914).

During World War I (1914–18), when Germany led forces against the forces of much of Europe and the United States, Munch returned to his earlier motifs of love and death. Symbolic paintings and prints appeared side by side with stylized studies of landscapes and nudes during the 1920s. As a major project, never completed, he began to illustrate Henrik Ibsen's (1828–1906) plays. During his last years, plagued by partial blindness, Munch edited the diaries written in his youth and painted harsh self-portraits and memories of his earlier life. He died in Ekely outside Oslo on January 23, 1944.

I very much liked your details on this great artist, and its is really appreciation of this details that I thank you

He was a great artist I have just seen some of his work today \at the Tate Modern in. London.