The writings of John Muir, American naturalist (a scientist of natural history) and explorer, are important for their scientific observations and their contributions to the cause of conservation (the preservation and protection of natural resources).

John Muir was born in Dunbar, Scotland, on April 21, 1838. He was the third of Daniel and Anne Gilrye Muir's eight children. Muir recalled in The Story of My Boyhood and Youth (1913) that his father was religious and extremely strict, keeping his children in line with frequent whippings. In 1849 the Muirs moved to the United States and bought farmland near Portage, Wisconsin. Muir's father worked him hard on the farm and would not allow him to waste daylight hours on reading. Muir asked for and received permission to rise early in order to study. He invented an "early-rising machine" that dumped him out of bed at one o'clock each morning so that he could read. In 1860 he displayed this and other inventions at the Wisconsin State Fair.

In 1861 Muir entered the University of Wisconsin to study science. He also tried studying medicine but soon gave it up for various jobs that challenged his skill at inventing things. His interest in nature, particularly plants, was growing; he made frequent trips throughout Wisconsin and nearby states to observe plant life. In 1867 he gave up his own inventions "to study the inventions of God." He set out on the walk described in A Thousand Mile Walk to the Gulf (1916). Actually, he went as far as Cuba. In 1868 he traveled to San Francisco, California, and worked on a sheep ranch. Exploring Yosemite Valley occupied much of his next six years. On all of his explorations he kept a journal of scientific and personal observations and also pencil drawings.

In 1880, after returning from exploring in Alaska, Muir married Louie Wanda 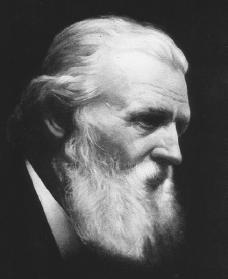 John Muir.
Reproduced by permission of
Archive Photos, Inc.
Strentzel, the daughter of a Polish plant grower. They would have two children. In 1881, after another trip to Alaska, Muir settled on a fruit ranch near Martinez, California. He worked for ten years to make enough money to enable him to stop. Having provided permanently for his wife, two daughters, and himself, he turned his full attention to the study of nature. Glaciers and freezing particularly interested him, and his work contributed to an explanation of the process by which glaciers are formed. He also went on expeditions to Europe, Asia, and Australia.

In 1889 Muir argued in Century magazine that Yosemite Valley should become a national park. The passage of a law in 1890 making that happen owed much to Muir's influence. The Mountains of California (1893), Our National Parks (1901), and his many articles in popular magazines greatly advanced the conservation movement, as did his creation in 1892 of the Sierra Club, an organization dedicated to preserving wild lands such as Yosemite. Muir served as the president of the club until his death.

Muir's wife died in 1905. From then until his death Muir published four books, including Stickeen (1909), which was a popular dog story, and My First Summer in the Sierra (1911). He died in Los Angeles, California, on December 24, 1914. John of the Mountain, drawn from Muir's journal of his 1899 Alaskan expedition, was published in 1938.

I enjoyed this thing because I am doing a research report and I found the information I needed for my report. I also read a book called "John Muir : young naturalist"by Montrew Dunham ; ill. by Al Fiorentino.(Series: Childhood of famous Americans)
That also gave me most of the wonderful information I used for my report. This book is for kids from the ages 7-10. I am 10 years old. Even if you are not within this age range you will enjoy this book.
2
christin

This is alot of information for my homework. I have never heard John Muir before but now I do so I can tell my mom bout him then
3
ana

This was very helpful for my assignment on John Muir.