Golda Meir served as Israel's foreign minister from 1956 to 1966 and became its fourth prime minister in 1969. By the end of her life, she had become a hero as one of the first women to head a nation in the modern era. Meir was a leading figure in the movement called Zionism, the movement to create a Jewish state in Palestine, the area the Jews regarded as their historical home. The Zionist movement helped lead to the founding of Israel.

Golda Meir was born the daughter of Moshe and Bluma Mabovitch in Kiev, Ukraine, on May 3, 1898. She moved with her family to Milwaukee, Wisconsin, in 1906. The Mabovitch family had fled their home in part to escape pogroms (mob attacks) that had been carried out against Jews in Russia at the time. Meir later recalled that her childhood terror of anti-Semitic (anti-Jewish) violence strongly influenced her later commitment to establish Israel as a safe, secure Jewish state.

After attending high school, Meir went to the Teachers' Training College in Milwaukee in 1917. She had attained her school-teacher's training over the objections of her parents, who had felt that girls should be married, not pursue a profession. Meir did both, marrying Morris Myerson in 1917 (later she modified her name to Meir). In 1921 they left for Palestine. This Middle Eastern region, which included the territory of modern-day Israel and the West Bank, was at that time under the administration of Great Britain and largely populated by Arabs.

After arriving in Palestine, the Myersons joined a kibbutz (a communal settlement) where after some training they were put in charge of the chicken farm. However, Golda's husband became ill, and the couple decided to move to Tel Aviv. The couple eventually moved to Jerusalem where their two children were born. In Jerusalem, Golda found work as treasurer of the Office of Public Works of the Histadruth, a labor organization that included kibbutz workers and that became the most important economic organization in the Israeli state.

From 1928 Golda Meir was the secretary of the Working Women's Council in Palestine and served as its representative on the leadership of the Histadruth. She also represented the council at a number of international labor meetings and was a delegate to its sister organization, the Pioneer Women, in the United States. After 1929 she was elected a delegate to most meetings of the World Zionist Organization. This was the real beginning of her Zionist political activity. In 1940 she was appointed head of the political department of the Histadruth. As such, she fought against the British White Paper of 1939, which limited Jewish immigration to Palestine. Meir organized illegal Jewish immigration to Palestine at this time, when Jews faced danger in Europe because of World War II (1939–45) and persecution by the German Nazi regime.

When the Palestine Administration (the main British governing body) imprisoned the leaders of the Jewish Agency, a Zionist organization, in June 1946, Meir was appointed acting head of the Jewish Agency's political department. Originally picked to replace the arrested Moshe Shertok-Sharett (1894–1965) in this position, she continued in this role until the proclamation of the independence of Israel on May 14, 1948. Early in 1948 she visited the United States to organize an emergency fund campaign for Palestine, with very successful results. On May 14 she was, as a member of Israel's Provisional Council of State, among the signers of its Declaration of Independence.

Meir started her political career in Israel as its representative to the Soviet Union. With her election to the first Israeli Parliament (governing body), she returned to Israel and was appointed minister of labor and social insurance. While in this office, she worked to solve the most important internal problems of Israel: housing and employment for the new mass Jewish immigration. Still known by her married name, she engineered what became known as the "Myerson Plan," which allowed for the construction of more 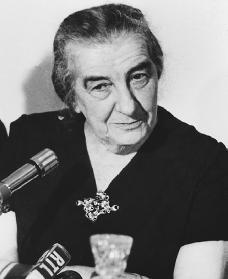 In 1956, Israeli prime minister David Ben-Gurion (1886–1976) called Meir "the best man" in his cabinet and named her to replace Shertok-Sharett as foreign minister, among the most important government jobs in the nation. It was now, as a result of Ben-Gurion's desire to have all Israelis bear Hebrew names, that she reluctantly altered her name to Meir, while keeping it as close as possible to Myerson.

In 1966, tired and ill, Meir resigned as minister of foreign affairs. However, soon after, under pressure from her political party, she agreed to take over the leadership of Israel's Labor Party. Over the next two years, she succeeded in reuniting three main labor groups that had split, the Mapai, the Achdut Ha'Avodah, and the Rafi, into one political party. The merger took place on January 2, 1968, and in August she retired from political activity. However, after the death of Prime Minister Levi Eshkol (1895–1969), when it looked as if conflict might arise within the Labor Party in the effort to find his replacement, Meir again came out of retirement to assume the post of Israel's prime minister on March 17, 1969.

Though elderly and in poor health, Meir proved her abilities to the country during her initial nine-month term. As a result, her Labor Party won the 1969 elections. Meir thus gained her own four-year term as prime minister. This period was marked by Meir's efforts to gain U.S. aid in the form of military and economic assistance. The assurances she won from U.S. president Richard Nixon (1913–1994) helped her open peace talks with the United Arab Republic in 1967, during which one of the several conflicts between Israel and its Arab neighbors (known as the Arab-Israeli Wars) had occurred.

Meir sided with radicals in her government who felt that the territories captured during the 1967 war should be settled by Israelis, yet she also retained the support of moderates who favored giving up land claims in exchange for peace. However, in 1973 and 1974, Israel's unpreparedness for another of the Arab-Israeli Wars, known as the Yom Kippur War, brought demands for new leadership. After the 1973 elections, Meir was still able to form a new government, but divisions only increased and on April 10, 1974, she resigned as prime minister.

Even in retirement, Meir remained an important political presence in Israel. Her autobiography, My Life, helped assure her place in the public's imagination as the kindly grandmother who had risen to greatness in her nation's hour of need. Meir died in Jerusalem on December 8, 1978.