Rigoberta Menchú has been a passionate spokesperson for the rights of indigenous peoples—people who belong to an ethnic group that is native to a region, such as the Mayan peoples of Central America. She won a Nobel Peace Prize in 1992 for her work on behalf of the indigenous groups of Guatamela, her native country. However, her work has made her a leading voice for the rights of indigenous peoples throughout the Western Hemisphere.

Rigoberta Menchú was born on January 9, 1959, in Chimel, a village in the Quiché province (political unit or region) in the mountainous northwest region of Guatemala. Her mother was a midwife (a person who assists women in giving birth) and traditional healer. Her father, Vicente, was a day laborer (someone who is hired and paid to work on a daily basis) and community leader. Both her parents belonged to one of the many indigenous groups of Guatemala, the Quiché Maya. They spoke little Spanish, the language of those in power of Guatemala since its conquest by Spain in the sixteenth century. Instead, they spoke Quiché. Young Menchú herself spoke only Quiché until she was nineteen.

Menchú's difficult childhood is an example of how hundreds of thousands of Indian (indigenous) children grow up in Guatemala. Every year she followed her parents to the southern coastal plantations (large farms), where they spent months as laborers picking cotton and coffee. Two of her brothers died on the plantations, one after being poisoned by insecticides (chemicals used by farmers to kill insects) and the other because of malnutrition (poor diet). Menchú started working on the plantations when she was only eight, and at age thirteen she experienced her first close contact with people of Spanish culture 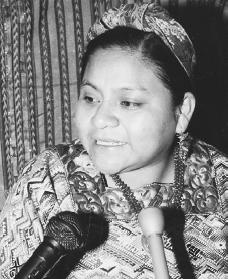 Rigoberta Menchú.
Reproduced by permission of
AP/Wide World Photos
.
when she worked as a maid for a wealthy family in Guatemala City. At this time, Menchú also experienced discrimination against Indians practiced by Latinos (people of Spanish culture). Her employers made her sleep on the floor on a mat next to the family dog—which, she later recalled, was treated better than her.

Menchú's political beliefs were shaped by Guatemala's troubled history. In 1954, a left-wing civilian president was removed from power by a coup d'état (the overthrow of a government by a small group of people who have held positions of power) that was supported by the U.S. Central Intelligence Agency. After this coup, the country was ruled by military officers. They ruled the country harshly, tolerating little protest or disagreement. When a guerrilla movement (a movement in which small groups use surprise tactics and attacks to harass or overthrow those in power) opposed to the military rulers began in 1962, the government responded violently. They arrested and killed not only the guerrillas, but also those who supported them or were believed to support them, especially in the countryside.

Political violence began again in the 1970s, when government pressure was applied so widely and harshly that U.S. president Jimmy Carter (1924–) halted economic aid to Guatemala after repeated warnings to the government to stop human rights (basic rights and freedoms to which all people are entitled) violations. Guatemala's Indians, who made up 60 percent of the population, were forced to move into "model villages" and to serve in the military. In this environment, movements to benefit the conditions of Indians were viewed as part of a communist plot by the government.

Menchú became politically active, inspired in part by her religious beliefs. Like many others in Central America, she was influenced by Liberation Theology, a movement that believes the Bible should be read through the eyes of the poor and that Jesus Christ had a special message of freedom for poor people.

Another important influence was Menchú's father, Vicente, who was active in the Peasant Unity Committee, a group that fought to obtain land for peasants and to protect the land they held from being seized by wealthy landowners. Rigoberta Menchú joined the committee in 1979, and was asked to organize the country's twenty-two Indian groups against exploitation (being treated unfairly by those in power). Later that year her teenage brother was tortured and then killed by the army. The following year she lost her father when Vicente Menchú, along with other representatives of indigenous groups, occupied the Spanish embassy in Guatemala City as part of a protest activity. The army attacked the embassy and burned it, killing thirty-nine people, including Menchú's father.

The next year Menchú's mother was kidnapped, tortured, and killed by the Guatemalan army, and two of her sisters joined the guerrillas. Life in Guatemala had become too dangerous, and Menchú fled to Mexico in 1981. There she began an international crusade to represent the hardships of the Guatemalan Indians and joined the United Nations Working Group on Indigenous Populations.

In 1983, while Menchú was in Paris to promote her cause, she dictated (spoke out loud to be copied down) her life story to Elizabeth Burgos. The result was the widely read book I, Rigoberta Menchú: An Indian Woman in Guatemala, which was translated into more than a dozen languages. It brought her worldwide attention and helped her to become the foremost spokesperson for indigenous peoples.

In 1988, Menchú's first attempt to return to Guatemala ended badly when she was threatened and put in jail. However, she later visited her country again for short periods of time. It was during one such visit in October of 1992 that she learned she would be given the Nobel Peace Prize for her work on behalf of the rights of indigenous peoples. She was only thirty-three.

In June 1993, during a political crisis in Guatemala, Menchú played a key role in the events that brought to power a new president, Ramiro de León Carpio, a human rights advocate. International pressure also helped force the government to ease up on military violence and violation of people's rights, and in 1995 many refugees who had fled from Guatemala to Mexico began to return.

The following year, the Guatemalan government and rebel leaders signed a cease-fire agreement to end their forty-two-year conflict, Latin America's longest civil war. It was a war that Menchú and her family had fought hard to end.

Menchú's actions and statements have been considered controversial. Conservatives have accused her of being associated with communist groups, and the story of her life in I, Rigoberta Menchú: An Indian Woman in Guatemala was questioned by journalist David Stoll in 1998. In his own book, Rigoberta Menchú and the Story of All Poor Guatemalans, Stoll argued that Menchú had distorted key facts in her autobiography.

Nevertheless, Menchú remains an active voice for those who lack representation. In 2000 she filed charges in a Spanish court against several officials in Guatemala's former military governments, accusing them of genocide (mass murder), torture, and state terrorism against some two hundred thousand people who had been killed in her country during the 1980s. Menchú has also been a vocal opponent of the effects of globalization, or the increasing dominance of multinational corporations in the world's economy. In early 2002 she was among the most celebrated speakers at the World Social Forum, a gathering of antiglobalization protesters in Brazil that was timed to coincide with the World Economic Forum, a meeting of politicians and corporate officers that was held at the same time in New York, New York.