Felix Mendelssohn was a German composer (a writer of music), conductor (the leader of a musical group), pianist, and organist. He developed a basic classical approach to musical composition with fresh romantic harmonies and expressiveness.

Felix Jakob Ludwig Mendelssohn-Bartholdy was born in Hamburg, Germany, on February 3, 1809, the son of Abraham and Leah Mendelssohn and the grandson of the famous Jewish philosopher Moses Mendelssohn (1729–1786). In later years Felix's father humorously referred to himself as "formerly the son of my father and now the father of my son." In 1812 the family moved to Berlin, Germany, where Abraham established himself as a banker, converted to Protestantism (a branch of Christian religion), and changed the family name to Mendelssohn-Bartholdy.

Felix and his elder sister, Fanny, received their early piano instruction from their mother. In 1816, on a visit to Paris, France, he studied with the pianist Marie Bigot. The next year he began formal studies in composition with Carl Friedrich Zelter, a composer greatly admired by the poet Johann Wolfgang von Goethe (1749–1832). Also as a child, Mendelssohn took a keen interest in drawing and painting and took lessons in foreign languages.

Mendelssohn's first public appearance occurred at the age of nine. Famous musicians gave concerts every Sunday at his father's house; in addition to broadening the musical horizons of the gifted boy, they enabled him, as a budding composer, to test many of his works as he wrote them. In 1819 he entered the Singakademie, a music academy, and from that time on compositions flowed steadily from his pen. In 1820, for example, he produced two piano sonatas (pieces for one instrument), a violin sonata, songs, a quartet for men's voices, a cantata, and a short opera.

The first public presentation of Mendelssohn's works took place in 1822. That year he also wrote his official op. 1, a Piano Quartet in C Minor. All these works were well received. He had a private orchestra, for which he wrote the work now known as Symphony no. 1 in C Minor. He also continued with other work, such as the Piano Quartet in F Minor (1823).

In 1824 the famous pianist Ignaz Moscheles (1794–1870) arrived in Berlin from London, England, and for a time Mendelssohn studied piano with him. The following year Mendelssohn visited Paris, where he met many famous composers and performed his Piano Quartet in B Minor, dedicated to Goethe. Back in France he wrote with mature craftsmanship the celebrated Midsummer Night's Dream Overture.

In 1827 Mendelssohn's only opera, Die Hochzeit des Camacho ( The Marriage of Camacho ), based on Don Quixote by Cervantes (1547–1616), was presented in Berlin. More successful was the Octet for Strings, one of Mendelssohn's freshest and most original works. The same year he became acquainted with Anton Thibaut, a professor of law and a gifted amateur writer of music who was concerned with revitalizing interest in old church music. Through him, Mendelssohn came to know the masterpieces of the Renaissance (a period of great artistic awakening during the fourteenth to sixteenth centuries) and early baroque choral music, an elaborate style of music popular in the eighteenth century. In 1828 appeared the Goethe-inspired overture Calm Sea and Prosperous Voyage.

On March 11, 1829, a great musical event occurred: Mendelssohn conducted the Singakademie in the first complete performance of Johann Sebastian Bach's (1685–1750) St. Matthew Passion since the composer's death. The work was a huge success, and the performance was of great importance to all later German composers for it marked the beginning of the revival of Bach's works. Later that year Mendelssohn visited England, where he conducted a concert of the Philharmonic Society. He took a long trip through Scotland, where he sketched the now famous Hebrides, or Fingal's Cave, Overture. On his return to Berlin he was offered the post of professor of music at the university but turned it down.

After writing the Reformation Symphony (1830) Mendelssohn began a series of visits to various European cities that lasted for almost three years. After a short stay with Goethe at Weimar, Mendelssohn went to Rome, Italy, where he began both the Scottish and the Italian symphonies. In the autumn he returned to Germany and played his newly composed Piano Concerto in G Minor in Munich, Germany. In 1832 he left for London, 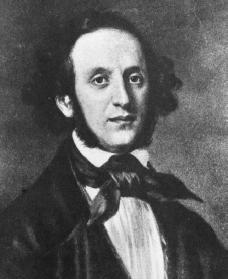 Felix Mendelssohn.
Courtesy of the
Library of Congress
.
where he conducted the Hebrides Overture and the Piano Concerto in G Minor with great praise. That same year his first book of Songs without Words ( Lieder ohne Worte ) was published.

In 1835 Mendelssohn became director of the Gewandhaus concerts in Leipzig, Germany. He made Leipzig into a musical center of European significance because of his gifts as conductor, his creativity, and his all-encompassing (including all) musical education. He featured many contemporary (modern) compositions, such works as the C Major Symphony of Franz Schubert (1797–1828), newly discovered by Robert Schumann (1810–1856), and selected compositions of J. S. Bach. The only sadness he experienced was the death of his father in 1835. A year later he met Cécile Jeanrenaud, whom he married in 1837. Five children were born of this marriage.

Upon the urging of the king of Prussia, Mendelssohn was appointed music director of the Academy of Arts in Berlin. Until 1845 he worked only occasionally in Berlin without giving up his post at Leipzig. His schedule was marked with several trips to London, with performances of his works in London and Birmingham, England.

In 1843 Mendelssohn founded the Leipzig Conservatory of Music, the first of its kind in Germany. He completed the Scottish Symphony, the Violin Concerto, and other major works of his maturity in Leipzig. In 1844 he conducted five Philharmonic concerts in London, and in 1846 he gave the first performance of his Elijah, written for the Birmingham Festival of that year. His chief occupation was still as conductor of the Gewandhaus concerts, but he also functioned as director of the Leipzig Conservatory, teaching piano and composition as part of his duties.

Mendelssohn's health began to fail in 1844. Three years later he was literally devastated by the death of his beloved sister, Fanny, on May 14. From then on his health fell apart drastically, and although he went on a short summer trip to Switzerland for his health, finishing the String Quartet in F Minor, he returned exhausted to Leipzig, where he died on November 4, 1847, at the age of thirty-eight.

Werner, Eric. Mendelssohn: A New Image of the Composer and His Age. Trans. New York: Free Press of Glencoe, 1963.