Kweisi Mfume has been an active leader in the civil rights struggle for many decades. As a congressman, Mfume became one of the most well-known African American politicians in Washington, D.C. Believing that he could achieve more for civil rights by working for the National Association for the Advancement of Colored People (NAACP), Mfume eventually left Congress to become president of the organization.

"Things spun out of control"

Kweisi Mfume was born Frizzell Gray on October 24, 1948, in Baltimore, Maryland. His stepfather, Clifton Gray, was a truck driver, and his mother, Mary Elizabeth Gray, took odd jobs, but the family was often short of cash. Mfume was a good student who was protective of his three younger sisters. When Mfume was eleven, Clifton Gray abandoned the family. Then, when Mfume was sixteen, his mother discovered that she had cancer and soon died. He told U.S. News and World Report, "After she died of cancer, things spun out of control." Mfume quit high school during his second year and went to work to help support his sisters. At times he worked as many as three different jobs in a single week.

Mfume also began hanging out on street corners drinking with friends. As he recalled in U.S. News and World Report, "I was locked up a couple of times on suspicion of theft because I happened to be black and happened to be young. And before I knew it, I was a teenage parent, not once but twice, three times, four times, five times." Mfume's life changed on a July night in the late 1960s. He had been drinking with his friends when suddenly he began to feel strange. "People were standing around shooting craps [playing dice] and everything else, and something just came over me," he remembered in Business Week. "I said, 'I can't live like this anymore.' And I walked away." Mfume spent the rest of the night in prayer, then proceeded to earn his high-school diploma and pursue a college degree.

In an effort to connect with his African background, Mfume adopted a new name early in the 1970s. His aunt had traveled to Ghana and suggested the name when she 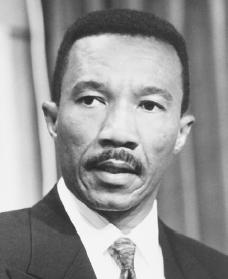 Kweisi Mfume.
Reproduced by permission of
AP/Wide World Photos
.
returned. "Kweisi Mfume" is a phrase that translates as "conquering son of kings." Mfume went to work at a radio station in Baltimore. He began as an unpaid volunteer and eventually became an announcer. He also earned a bachelor's degree with honors from Morgan State University in 1976. When that college opened a radio station, Mfume was hired as program director. Mfume became one of the strongest voices in Baltimore's black community. His growing popularity convinced him to try his hand at politics.

In 1978 Mfume ran for a seat in the Baltimore City Council. After an advisor recommended that he start wearing suits and ties, he won the election by only three votes. Mfume became a constant critic of then-Baltimore mayor William Donald Schaefer (1921–), accusing Schaefer of ignoring poor neighborhoods. The two men almost came to blows on several occasions. Gradually Mfume became aware that politics was a game of compromise and building coalitions (temporary alliances). He learned the art of negotiation (give and take to settle an issue) and even developed a friendly relationship with Schaefer. Mfume told Business Week of his former enemy, "We could go to our graves battling each other, or we could get things done."

A congressman with clout

In 1986 Mfume became a candidate for Congress from the Seventh District. His opponents attacked him by reminding voters that Mfume had dropped out of high school and fathered many children without marrying the mothers. Still, he won the election and took his seat in Congress in 1987. When he found himself on the House Committee on Banking, Finance, and Urban Affairs, he taught himself about banking issues and economics. When the map of his district was changed to include more rural regions of Maryland, he studied farming and zoning laws to be able to represent his new constituents (members of his district). Mfume told the Washington Post, "I wanted people to get used to me real quick because I didn't plan on leaving."

Mfume established himself as a liberal who supported an increase in federal aid to inner cities. He returned to Baltimore nearly every week to deal firsthand with his constituents, many of whom lived in the city. "I keep coming back to these communities and the lessons I learned here because that's what got me where I am," he told the Washington Post. "When I can't get anything moving in Washington I can always come back here.… Whatever I'm doing in Washington, if it doesn't matter here, it doesn't matter."

By his fourth term, Mfume had enough influence to become chairman of the Congressional Black Caucus, a group in Congress that supports the interests of African Americans. Soon after his election as chairman, Mfume and the Caucus presented a list of demands to President Bill Clinton (1946–), most of them having to do with federal aid to cities and the poor. "Not too many brothers or sisters would say 'no' to the president," NAACP executive director Benjamin Chavis (1948–) was quoted as saying in Emerge. Mfume told Business Week, "We are going to be taken seriously.… If that means killing an important piece of [leadership-backed] legislation, then that will be the case."

On February 20, 1996, Mfume left his seat in Congress to become the president of the National Association for the Advancement of Colored People (NAACP). He said that he could do more for civil rights as NAACP president than in Congress. After one year of leadership, Mfume had erased the NAACP's $4.5 million debt. However, many questioned whether he would be able to restore the association to its former place of leadership in the civil rights movement. He also faced the task of trying to change the image of the association in an effort to increase appeal among younger African Americans.

After one year on the job, Mfume said that his term as president had "gone by in the blink of an eye because the workload was so high and the challenges were so great and the possibilities were so unlimited. I'm a workaholic by nature, so the fact that all this kind of coincided together was good for me in the sense that it challenged me." With the group's financial problems behind him, Mfume told members that the NAACP still had a long way to go. Among the issues he intended to address were affordable health care, conservation, voting reform, and hate crimes. In January 2000, NBC Television struck a deal with the NAACP to find more minorities to write, produce, and direct television shows after NAACP complaints about the "virtual whitewash" in new programming. Mfume predicted similar agreements would follow with the ABC, CBS, and Fox networks.

Mfume, Kweisi. No Free Ride: From the Mean Streets to the Mainstream. New York: One World, 1996.

What a biography. It's amazing how one can change and grow.

The power of one.
2
Shajuan