Catherine was born in 1519 to a powerful Italian prince from the Medici family. Her mother died a few days after giving birth, and her father died a week later. Her father's relatives, among them popes Leo X (1475–1521) and Clement VII (1478–1534), took over her care. At the time of her birth, the Reformation was beginning with Martin Luther's (1483–1546) criticism of the Roman Catholic Church. It soon spread throughout Europe. Protestants, as they came to be called, sought a truer form of their faith than that offered by the political and often corrupt (engaging in unlawful activity) Catholic Church. French Protestants were known as Huguenots, and the rapid growth of their numbers soon made them a powerful force in French affairs.

In 1533 Pope Clement arranged the marriage of fourteen-year-old Catherine to fourteen-year-old Henry, the duke of Orleans and younger son of King Francis I (1494–1547) of France. Catherine eventually gave birth to ten children, beginning in 1543. The death of her husband's older brother in 1536 made Henry and Catherine next in line for the throne. Catherine's husband, now Henry II, had been cared for at age eleven by Diane de Poitiers, who was twenty years his senior. Despite this age difference, they became lovers, and throughout most of Henry's reign as king of France, which began in 1547, 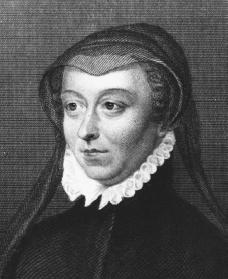 Catherine de' Medici.
Reproduced by permission of the
Corbis Corporation
.
Diane had more influence over him than Catherine did. Diane was even given responsibility for raising Catherine's children.

The Catholic leaders of France and Spain made peace in 1559 partly because they needed money but also so they could unite against Protestantism. The treaty was sealed by the marriage of Philip II (1527–1598) of Spain to Elisabeth, the teenage daughter of Catherine and King Henry. At the joust (a fight on horseback) held during the wedding celebrations, however, King Henry was injured by a lance that pierced his eye and entered his brain. Henry's death a few days later brought his and Catherine's oldest son, sixteen-year-old Francis II, to the throne.

Sensing an opportunity, Huguenot leaders quickly organized a plot to take over the court of Francis II. Their plan failed, and the royal army arrested the leaders, executing fifty-seven of them. This did not end the conflicts in France; from this time forward, the Huguenot Navarre family and the Catholic Guise family began a long struggle. The death of Francis II the following year made Catherine regent for her second son Charles, who became King Charles IX at the age of ten. Through much of the 1560s, the two religious groups were at war while Catherine and Charles tried to avoid siding completely with either camp. Catherine tried to keep the country running smoothly in the face of this constant tension. The feud between the Navarre and Guise families became worse when the Huguenot leader Admiral Gaspard de Coligny (1519–1572) ordered the assassination of the duke of Guise in 1563.

The Peace of St. Germain

The signing of the Peace of St. Germain in 1570 brought a temporary end to a decade of war. Among the treaty's provisions were the decisions that Catherine's daughter Marguerite would marry Henry of Navarre (1553–1610), the Huguenot leader, that the Huguenots would be given several territories throughout France, and that Coligny would return to his position in the royal court. Catherine hoped he might act to calm his fellow Huguenots while she played the same role among Catholics. But Coligny quickly moved to become a friend and adviser of King Charles IX, leading many to believe he was planning another takeover.

Catherine decided to dispose of Gaspard de Coligny once and for all. She accepted an offer from the Guise party to have him assassinated, hoping that it would lead to revived power for her own party. The assassin shot Coligny but failed to kill him. After talking to Catherine and his younger brother Henry, Charles finally accepted their claim that Coligny was using him, that Coligny planned to overthrow the whole Catholic court, and he and the other Huguenot leaders should now be finished off. According to his brother Henry's diary, Charles at last shouted, "Kill the Admiral if you wish; but you must also kill all the Huguenots, so that not one is left alive to reproach (oppose) me. Kill them all!"

At two in the morning on August 24, Saint Bartholomew's Day, 1572, Catholic troops moved to kill the injured Coligny and other Huguenot leaders. Eventually all sense of order broke down; looting and fighting broke out across Paris, and over two thousand men, women, and children wound up dead. Catherine was reported to have ordered the attacks, but this has never been completely proved. Another civil war began, but by a strange turn of events, leadership of the Huguenot party now fell to Catherine's youngest son Francis, duke of Alençon. Placing himself at the head of the Protestant forces and dreaming of a crown, he declared that his older brother Henry, who had just been elected to the throne of Poland, was no longer available to rule France.

The departure of Catherine's third son, Henry, to take over the throne of Poland prompted another Huguenot uprising. With her usual energy, Catherine organized forces to stop it, and with her usual decisiveness, she witnessed the executions of its leaders. She also witnessed the death of her son King Charles, aged twenty-four. She recalled her favorite, Henry, to take over as king. Henry III was crowned in 1575 and married, but he had no children who might eventually assume the throne. He also had disagreements with the Guise family, which complicated things. Catherine urged Henry to settle his differences with the Guise family for the sake of national and Catholic security.

Catherine remained politically active until the end of her life, touring France on Henry's behalf and trying to maintain the loyalty of its many war-torn territories. She also built up a huge collection of books and paintings, and she built or enlarged some of Paris's finest buildings. In 1589 she became ill while dancing at the marriage of one of her granddaughters. She died on January 5, living just long enough to hear that Henry's bodyguards had murdered Guise, which she saw as a rejection by her son of all that she had worked for. Later that year, Henry III was assassinated. In another twist, it was the Huguenot prince Henry of Navarre who took over the throne; he was unable to sit upon it until he adopted the Catholic faith in 1593 with the famous remark, "Paris is worth a Mass."

"Catherine was married at age 14, and did not fall pregnat for many years later. No one ever really called Catherine beautiful."
2
Katelyn miller

Alexandre Dumas' Queen Margot gives a historic fictional account of these very deeds. It is a reviting portrayal which adds intrigue of substance to the history reflected in the above post.