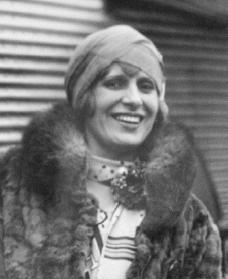 Aimee Semple McPherson.
Courtesy of the
Library of Congress
.

Aimee Semple McPherson, American evangelist (one who preaches Christianity), symbolized important traits of American popular religion in the 1920s and 1930s. She was one of the first female evangelists, the first divorced evangelist, and the founder of the Foursquare Gospel church.

Aimee Kennedy was born on October 9, 1890, near Ingersoll, Ontario, Canada. Her father, James Morgan Kennedy, was a struggling farmer. Her mother, Mildred "Minnie" Pearce was a former member of the Salvation Army (1865; founded by William Booth [1829–1912] as a religious organization with military structure for the purpose of bettering life for the poor and evangelizing the world). Soon after Aimee's birth, her mother took her to the Salvation Army and dedicated her to God's service. Aimee's training was particularly geared toward religious work.

When Aimee was in high school, she began to question her religious beliefs. At the age of seventeen she went to a religious meeting and experienced Pentecostal (a branch of Christianity that supports individual religious experience and evangelism) conversion under the guidance of Scottish evangelist Robert Semple. In 1908 she married Semple and followed him to China as a missionary (one who travels to spread religious teachings). He died soon after arriving in China, leaving her pregnant and penniless. After the birth of Roberta Star, she returned home and continued her Pentecostal work. She also worked with her mother for the Salvation Army.

Semple married a New York grocery clerk, Harold S. McPherson, in 1913; this marriage ended in divorce five years later. Thereafter she set out as an untrained lay evangelist to preach a Pentecostal-type of revivalism (a religious practice focused on restoring the spirit of God into people) to the people of Ontario, Canada.

Physically attractive and possessing a dynamic personality and the instinctive ability to charm crowds, Aimee Semple McPherson gradually perfected her skills. By this time professional revivalism had achieved a distinctive style and organization; McPherson was in the forefront. Though she initially lived an almost hand-to-mouth existence, following the route of traveling evangelists from Maine to Florida, success meant a move to larger cities in America, England, and Australia. In the cities audiences were often immense, with ten thousand to fifteen thousand people deliriously applauding her. "Speaking in tongues" and successful efforts at faith healing—both practiced by Pentecostal churches—were a part of her ministry. (Pentecostals believe that the sounds made by people while "speaking in tongues" are biblical messages that can be interpreted by another worshipper.)

By 1920 McPherson was permanently established in Los Angeles, California. In 1923 she and her followers dedicated Angelus Temple. She called her new breed of Christian church the Foursquare Gospel, a complete gospel for body, soul, spirit, and eternity. Seating over five thousand people, this served as her center of activity. Backed by a sharp business manager (her mother), McPherson developed a large group of devoted followers. She also became a community figure in tune with the publicity-oriented life of Los Angeles, the film capital of the world.

A popular evangelist, McPherson thrived on publicity and sensationalism (causing an intense and/or unnatural emotional reaction). The most astounding incident occurred in 1926, when McPherson, believed to have drowned in the Pacific Ocean, "miraculously" reappeared in the Mexican desert. Some challenged her tale of kidnapping and mistreatment, claiming she had been in hiding with one of her male followers. The resulting court battle attracted national attention.

McPherson continued her unconventional ways by engaging in a slander suit (when a person is taken to court for telling lies that damaged another's reputation) with her daughter, publicly quarreling with her mother, and carrying on well-publicized vendettas (intense and lengthy fights) with other religious groups. Aimee Semple McPherson died of a sleeping pill overdose in Oakland, California, on September 27, 1944. The Foursquare Gospel church continues to thrive in America today.

It is an interesting story showing the victories and the weaknesses of a famous evangelist. We can learn from her as to have dedication for the work we have in hands no matter the type. People with charisma and physical attraction have to be careful with what the do especially when they decide to go into God's ministry. Holiness and moral clarity should be their main distinction of their lives.