The oldest of five children, Terry McMillan was born on October 18, 1951, in Port Huron, Michigan, a mostly white, working-class factory city. Her father, Edward Lewis McMillan, was a blue-collar worker (a person who works somewhere, like a factory, where a uniform or protective clothing is needed). He suffered from tuberculosis (a disease of the lungs) and was confined to a sanitarium (an institution for sick people to rest and recover) during most of McMillan's childhood. He also drank too much and beat his wife. McMillan's parents divorced when she was thirteen. In order to support the family, her mother, Madeline Tillman, held various jobs as a domestic worker, an auto worker, and a pickle factory employee.

At age sixteen McMillan got a job shelving books in a local library to help her mother provide for the family. There she discovered the world of the imagination. She became a devoted reader, enjoying the works of Nathaniel Hawthorne (1804–1864), Henry David Thoreau (1817–1862), Ralph Waldo Emerson (1803–1882), and Thomas Mann (1875–1955). Reading the works of these great writers led McMillan to believe that the world of literature was a white one. Upon seeing a book by James Baldwin (1924–1987), she was astonished to learn that African Americans also wrote books.

When McMillan was seventeen, she left Port Huron and moved to Los Angeles, California, where she worked as a secretary and took a class in African American literature at Los Angeles City College. This course introduced her to the works of such writers as Richard Wright (1908–1960), Zora Neale Hurston (1891–1960), Jean Toomer (1892–1967), and especially Ann Petry (1908–1997), whose novel The Street, with its honest and natural account of an African American woman living in a brutal city environment, would greatly influence McMillan's early fiction.

It was during this period of McMillan's life that she started to write. A love poem—the result of a failed relationship—was her first attempt. As she stated in an interview: "That is how it started. It kept going and it started turning into this other stuff, started turning 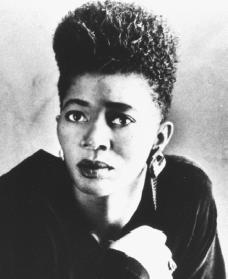 Terry McMillan.
Reproduced by permission of
Marion Ettlinger
.
into sentences." McMillan continued her interest in writing and her education by moving to northern California, where she studied journalism at the University of California at Berkeley. While at Berkeley she took a workshop with novelist and critic Ishmael Reed. Reed was excited by McMillan's writing and encouraged her to continue. He published "The End" (1976), her first short story, in Yardbird Reader.

After McMillan graduated with a bachelor's degree from Berkeley, she left California and moved to New York City. She joined the Harlem Writers Guild and went to artists' colonies such as Yaddo in upstate New York and MacDowell in New Hampshire. At MacDowell she finished the first draft of what would become Mama, her first novel. Based on her own life, Mama (1987) explores the grim and humorous situation of an African American family in a large city. Set in Point Haven, Michigan, and in Los Angeles, the novel revolves around the lives of Mildred Peacock and her five children. Mildred's oldest daughter, Freda, is sexually abused at fourteen, and her only son, Money, becomes a drug addict who winds up in prison. Despite the sad state of affairs that the Peacock household experiences, Mildred continues to fight to raise her family. Although critics felt the book lacked the focus of novels written by other African American women writers of the time, McMillan's work was generally greeted with praise.

Disappearing Acts (1989), McMillan's next novel, charts the love affair between Zora Banks, a junior high school music teacher who dreams of being a singer, and Franklin Swift, a high school dropout and often-unemployed carpenter and construction worker. Told in the first-person narrative voices (a type of storytelling where the narrator is the person engaged in the activity being retold) of Zora and Franklin and set in Brooklyn, New York, the novel is a powerful study of their relationship and the problems that prevent them from finding happiness together. While some reviewers applauded McMillan's creation of the character of Franklin, many critics cited the novel's use of slang as a major distraction. "The language that I use is accurate," McMillan later said in her defense. "That's the way we talk. And I want to know why I've never read a review where they complain about the language that male writers use!"

In 1990 McMillan edited Breaking Ice: An Anthology of Contemporary African American Fiction, a collection of stories by other African American writers. Her third novel, Waiting To Exhale (1992), describes the lives of Robin, Bernadine, Gloria, and Savannah, four educated African American women living in Phoenix, Arizona, who have an ongoing discussion about their problems in finding and keeping lovers. The book was greeted with tremendous critical and commercial success. By the end of 1996, more than 700,000 copies of the hardcover version and three million copies of the paperback had been sold. The film version, which grossed (earned before subtracting film production costs) $67 million in its first year, also proved there was a largely untapped African American female audience eager for movies and novels. Critics praised the work as further evidence of McMillan's bold writing talent.

Although Waiting to Exhale had been very popular, McMillan enjoyed even greater commercial success with her next novel, How Stella Got Her Groove Back. The novel had a first printing of 800,000 copies, a huge number for an African American female author, and film rights were sold immediately for a six million dollar advance. Again, McMillan based the story on her own experience, this time focusing on a middle-aged woman who falls for a twenty-year-old while on vacation in Jamaica. As Evette Porter pointed out in an interview with McMillan that appeared in the Village Voice, there are many similarities between the novel and its author, including a young Jamaican boyfriend, Jonathan Plummer, who McMillan met on the island. (They were married in 1998.) Critics pointed out that the book's similarity to real life should not blur the novel's larger message about exercising personal freedom in the way one chooses to live.

There was no question in the late 1990s that McMillan, a former writing professor at Stanford University, in California, and the University of Wyoming, had established herself as a major novelist and pioneer in a new type of fiction—the African American urban romance novel. As other writers began to publish books with similar themes in an attempt to cash in on the success of McMillan's work, she turned back to the subject of family for her next novel, A Day Late and a Dollar Short (2001), which is somewhat similar to her earlier Mama.

Hello I am a VERY BIG FAN of Ms. McMillian and I have been looking for her next book. I own each and everyone and ( in hard back ) dieing for the next. Were are you and when can I look forward to buying it.
Mess you much can't wait to read it.