Al Jolson was a famous singer and film actor. He starred in the first all-sound movie, The Jazz Singer.

Al Jolson (Asa Yoelson) was born on May 26, 1886, in Srednike, Lithuania. Jolson's family came to the United States in 1894, settling in Washington, D.C. Several factors in Jolson's youth influenced his career, including his religious Jewish upbringing, the death of his mother when he was ten, and his father's work as a cantor (a singer of religious music in a synagogue). Jolson acquired a love of singing from his father, but he did not want to use his voice in the synagogue. Instead, he and his brother Harry sang on street corners to earn money. Jolson also attended the theater whenever possible and discovered he loved to perform.

Develops his own style

In 1900 Jolson left Washington, D.C., for New York. His first theater job was in a show called Children of the Ghetto. He also sang in a circus before teaming up with his brother to play vaudeville (traveling stage entertainment consisting of various acts). They toured as Jolson/Palmer/Jolson (Palmer was the third member of the team) with an act called The Hebrew and the Cadet, in which Harry Jolson and Palmer did a comedy routine and Al Jolson sang. Jolson was best when he was alone on stage, where he could more easily relate to the audience.

Jolson then left his brother's act and spent several years playing small clubs in San Francisco, California. One day, to liven up his act, he went on stage in blackface (with his face made up to resemble an African American) and sang "Rosey My Posey" in a Southern accent. In 1909 he was given a job in producer Lew Dockstader's Minstrel Show, and in 1911 he was hired for Broadway producer Lee Shubert's new show, La Belle Paree (1911), in which he sang "I Want a Girl Just Like the Girl That Married Dear Old Dad." Jolson's singing and stage manner were different from anything the audience had seen. He took a song 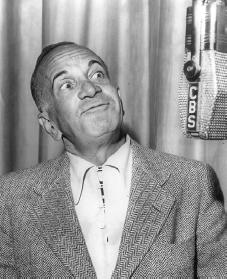 Al Jolson.
Courtesy of the
Library of Congress
.
and applied to it a loose jazz rhythm, rolling his eyes with a sly grin on his blackened face. He also appealed to the feelings of the audience with his sentimental song deliveries.

Although Jolson did not receive star billing until 1914 in Dancing Around, the audiences clearly came to see him. The Shuberts knew this and signed Jolson for a seven-year contract at the Winter Garden Theatre on Broadway. He played to overflowing houses in such shows as Robinson Crusoe, Jr. (1916), Sinbad (1918), and Bombo (1921). Most of these shows had no script and no scheduled list of songs. Jolson would come out on stage after the final act to talk to the audience and sing what pleased him. After each song he told the audiences, "You ain't heard nothing yet."

Jolson became known for songs like "Sonny Boy," composer George Gershwin's (1898–1937) "Swanee," and especially "My Mammy." In "Mammy" he would go down on one knee, and with tears in his eyes he would speak to "mother," telling her he'd "walk a million miles" just to see her. At the end he would get up and sing the last chorus with his hands spread wide and his face tilted upward.

Jolson worked constantly, doing a tour of his one-man show, then a vaudeville tour, and then a Sunday theater series. Finally he went to Hollywood to make movies. In October 1927 Warner Brothers presented the world's first talking-picture feature, The Jazz Singer. The film, the story of a rabbi's son who becomes an actor against his father's wishes, was a great success. People assumed the movie was based on Jolson's own life, a myth that he encouraged.

Despite the popularity of the film and its follow-up, The Singing Fool (1928), Jolson did not succeed in film. He made several more films, but his personal appeal to an audience never really came through on the screen. His career declined in the 1930s, but he continued to perform on radio and entertained soldiers during World War II (1939–45; a war fought mostly in Europe between the United States, Great Britain, France, and the Soviet Union on one side, and Germany, Italy, and Japan on the other). He also campaigned for several presidents by singing at rallies. In 1946 The Al Jolson Story, a fictional version of his life, was released and was an immediate success. In 1949 Jolson Sings Again, another smash hit, was released.

Jolson was married four times, and he had three children. He died of heart failure on October 23, 1950, the night before a planned radio taping with actor/singer Bing Crosby (1904–1977).

needs more info about early life. add miore about the early times of him. like in the begining
2
Joe Gismondi

Al Jolson in my opinion was the greatest entertainer that has graced this world or ever will. His voice was and is magical always pulling you in to want to heater more. No one of todays signers could ever match his strong dominant voice and stage presence , he takes command; and no present day singer with their weak squeaky voices and certainly ,never never can rapper come close. I've loved home since i first saw the Jolson story as a young kid.
I know he had a huge ego so it would be nice to know where fiction takes over for fact in his two movie boo's.
Any new info into his personal and hollywood life would be apprieciatate.
3
Amy

does anyone know if Al Jolsen owned The Wonder Bar, a bar-restaurant in mid town Manhattan in the 1930s