The writings of the English author and lexicographer (an author or editor of a dictionary) Samuel Johnson express a deep respect for the past combined with an energetic independence of mind. The mid-eighteenth century in England is often called the "Age of Johnson."

Samuel Johnson was born in Litchfield, Staffordshire, England, on September 18, 1709, the son of Michael Johnson and Sarah Ford. His father was a bookseller, and Johnson owed much of his education to the fact that he grew up in a bookstore. Johnson was plagued by illness all his life. As a child he suffered from scrofula (an infection of the face that causes scars), smallpox, and partial deafness and blindness. One of his first memories was of being taken to London, England, where he was touched by Queen Anne (1665–1714) (the touch of the ruler was then thought to be a cure for scrofula).

Johnson was educated at the Litchfield Grammar School, where he learned Latin and Greek. He later studied with a minister in a nearby village from whom he learned a valuable lesson—that if one is to master any subject, one must first discover its general principles, or, as Johnson put it, "but grasp the Trunk hard only, and you will shake all the Branches." In 1728 and 1729 Johnson spent fourteen months at Pembroke College, Oxford. Too poor and embarrassed by his poverty, Johnson could not complete the work for a degree. Johnson supported himself with teaching jobs after his father died in 1731. In 1735 he married Elizabeth Porter, a widow some twenty years older than him. Still trying to find a way to make a living, Johnson opened a boarding school, which had only three pupils. One of them was David Garrick (1717–1779), who would eventually become a famous actor.

In 1737 Johnson went to London to work for Edward Cave, the editor of the Gentleman's Magazine. Parliament did not then permit reports of its debates, and Cave published a column called "Debates in the Senate of Lilliput"—the name is taken from the first book of Jonathan Swift's Gulliver's Travels —for which Johnson, among others, wrote re-creations of actual parliamentary speeches. Johnson also published London, a Poem (1738) and The Vanity of Human Wishes (1749), two "imitations" of the Roman writer Juvenal (c. 60–c.140). In 1749 Johnson completed Irene, a play in verse, which was produced by Garrick and earned Johnson £300 (about $436).

In the early 1750s Johnson, writing at the rate of two essays a week, published two 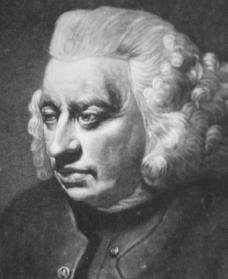 Samuel Johnson.
Courtesy of the
Library of Congress
.
collections, The Rambler (1750–52) and The Adventurer (1753–54). He also continued work on a dictionary of the English language, a project he had begun in 1746 with the help of six assistants. The project was finally completed in 1755. Although he received help from others, Johnson's Dictionary is probably the most personal work of its kind that will ever be put together. His own definition of lexicographer was a "writer of dictionaries; a harmless drudge," yet the work bears his personal stamp: it is notable for its precise definitions and for its examples, which draw on Johnson's reading of two hundred years of English literature.

Years of success and fame

Johnson's Rasselas, Prince of Abissinia, a moral fable (a mythical story that usually teaches a lesson about life) concerned with an innocent young man's search for the secret of happiness, appeared in 1759. The work was immediately successful; six editions and a number of translations appeared during Johnson's lifetime. In 1762 Johnson accepted a yearly pension of £300 from King George III (1738–1820). A year later he met James Boswell (1740–1795), the son of a Scottish judge. Boswell became Johnson's devoted companion and eventually wrote the great biography of his hero.

In 1765 Johnson met Henry Thrale, a well-to-do brewer, and in the Thrales' home Johnson found an escape from the solitude he had experienced since his wife's death in 1752. In 1765 Johnson published an eight-volume edition of the works of William Shakespeare (1564–1616). In 1773 James Boswell persuaded Johnson to join him in a tour of Scotland, and both men recorded their trip—Johnson's A Journey to the Western Islands of Scotland (1775) and Boswell's journal.

Johnson's last great work, the ten-volume Prefaces, Biographical and Critical, to the Works of the English Poets (better known as the Lives of the Poets ), was completed when he was seventy-two. It is a series of biographical and critical studies of fifty-two English poets. Johnson was saddened in his last years by the death of his old friend Dr. Robert Levett, by the death of Thrale, and by a quarrel with Thrale's widow, who had remarried with, what seemed to Johnson, inappropriate haste. Johnson died on December 13, 1784, in his house in London, and he was buried in Westminster Abbey.