Magic Johnson was one of professional basketball's most popular stars. He won five championships with the Los Angeles Lakers in the 1980s before he was forced to retire after contracting the human immunodeficiency virus (HIV), the virus that causes acquired immune deficiency syndrome (AIDS), a disease that destroys the body's ability to fight off infection.

Earvin Johnson Jr. was born on August 14, 1959, in Lansing, Michigan, the fourth of Earvin and Christine Johnson's seven children. His father worked at an auto factory during the day and hauled trash at night to make extra money. Earvin Jr. worked at several jobs, including helping his father, but his first love was basketball. In 1977 Johnson and his Everett High School team won the state championship. His passing and ball-handling skills won him the nickname "Magic." He then attended Michigan State University. In his second year, Michigan State won the national college basketball championship by defeating Indiana State University, a team led by future Boston Celtics star Larry Bird (1956–). Johnson scored twenty-four points and was chosen Most Valuable Player (MVP).

Johnson was selected first in the 1979 National Basketball Association (NBA) draft by the Los Angeles Lakers. He became the first rookie to start in an NBA All-Star game. The Lakers went on to defeat the Philadelphia 76ers for the NBA championship, and Johnson became the youngest player ever to be named playoff MVP. At six feet nine inches, Johnson became the first big man to excel at point guard, a position usually reserved for smaller players. He became one of the most popular players in the league.

During the 1981–82 season Laker head coach Paul Westhead designed an offense that featured center Kareem Abdul-Jabbar (1947–). The change upset Johnson, who asked to be traded. Westhead was soon replaced by Pat Riley, under whom Johnson became one of the league's best all-around players. In Johnson's first season with Riley, the Lakers won another championship, with Johnson again winning the playoff MVP award. In 1985 the Lakers won their third NBA title, defeating Bird and the Boston Celtics. The Lakers also won championships in 1987 and 1988.

During Johnson's twelve years with the Lakers, the team won five championships. He was chosen playoff MVP three times. He was a twelve-time All-Star and the 1990 All-Star game MVP. He averaged 19.7 points per game in 874 games, pulled down 6,376 rebounds, and had 1,698 steals. During the 1990–91 season he broke Oscar Robertson's (1938–) assist record, finishing the season with a total of 9,921. In October 1996 he was named one of the fifty greatest players in the history of the NBA.

In November 1991, during a physical examination, Johnson found out that he was a carrier of the HIV virus, which causes AIDS. Johnson admitted that his lifestyle as a sports celebrity included many sexual encounters. However, he never suspected that he might contract HIV, which he thought was limited to gay, or homosexual, men (men who are attracted to other men). Doctors advised Johnson to quit basketball immediately in order to protect his health.

Johnson immediately became a voice for AIDS awareness. "I want [kids] to understand that safe sex is the way to go," Johnson told People magazine. "Sometimes we think only gay people can get it [HIV], or that it's not going to happen to me. Here I am. And I'm saying it can happen to anybody, even Magic Johnson." Johnson was appointed to the National Commission on AIDS by President George H. W. Bush (1924–) but resigned to protest what he considered to be the president's lack of support for AIDS research. 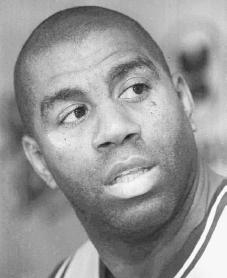 Magic Johnson.
Reproduced by permission of
AP/Wide World Photos
.
Johnson also coauthored What You Can Do to Prevent AIDS.

In January 1992 Johnson came out of retirement to play in the 1992 NBA All-Star game, scoring 25 points and being named the game's MVP. That summer Johnson went to Barcelona, Spain, as a member of the United States basketball team in the Summer Olympics. Referred to as the "Dream Team" by writers, the U.S. team, packed with NBA stars including Bird and Michael Jordan (1964–), easily won the gold medal. Fans were saddened, however, because they believed the careers of both Johnson and Bird were over.

Johnson could not let go of basketball. He announced his return to the NBA shortly before the 1992 season; after five preseason games he retired again, saying he wanted to stay healthy for his family. Johnson remained active in basketball, purchasing an ownership share in the Lakers and forming a team that played games around the world to benefit charities. He became a vice-president of the Lakers and took over as head coach of the team for the end of the 1992–93 season. In early 1996 Johnson again returned to play for the Lakers. By May, however, he announced his retirement—this time for good.

Johnson enjoyed all-star success as a businessman. He started paying attention to his money early in his career, after watching fellow teammate Abdul-Jabbar lose millions to crooked business advisers. By 1996 he had a net worth of more than one hundred million dollars. Like other star athletes, Johnson endorsed (appeared in ads giving support for) products and gave speeches for big fees. He led his Magic Johnson All-Stars around the world, playing exhibition games against foreign basketball teams for large profits. He also briefly hosted a television talk show.

One of Johnson's major investments was in large-scale property development. Among his successes were movie theaters and shopping centers in inner-city areas where no one else wanted to invest. In June 1995 Johnson opened the twelve-screen Magic Theatres in a mostly black section of Los Angeles. In 1997 Johnson opened another movie complex in Atlanta, Georgia. Magic movie houses were under construction in other cities, including Brooklyn, New York, where the historic Loews Kings Theater was restored at a cost of $30 million.

In September 1991, just before Johnson learned he had HIV, he married longtime friend Earletha "Cookie" Kelly. They had a son in 1993 and adopted a daughter in 1995. Johnson also had a son from another relationship who spent the summers with him. Johnson continued to take medicine, eat right, and exercise. As recently as September 2002, his doctors said he is free of AIDS symptoms. Doctors credit Johnson's exercise habits and his use of powerful drugs; Johnson's wife Cookie has credited God, stating, "The Lord has definitely healed Earvin. Doctors think it's the medicine. We claim it in the name of Jesus."

Johnson showed no signs of slowing down. He became the owner of several Starbucks coffee shops, started his own record company (Magic Johnson Records), and purchased Fatburgers, the popular Los Angeles hamburger chain. He also continued to speak out on AIDS and raise money for research. In 2002 he was elected to the Pro Basketball Hall of Fame.

that was a sad day for many when magic retired. i was 6 when it happened. Living in new york was great until after he retired people went out to the street and churches praying.
2
saige

I'm doing a report on Magic Johnson
I think he is amazing and shouldn't of let the disese affect his amazing basketball skills!
3
nikeboy67890

this information is really helpful in black history reports
4
Dee

I will forever love Magic and his wife Cookie, they are the epitome of what a married couple should be. Magic if by any chance you and Cookie actually read these comments, please know that you and your family are always in my prayers. May God continue to bless you and your family.I have had the dream of meeting the two of you forever. My husband and I face tough times often, I always remember you and Cookie, thanks much love DD
5
Pacers Fan

Magic should have played with the Pacers! Pacers are 3rd seed in the East NBA Playoff race and host the Cavaliers tonight I'm going of course what Pacers fan would want to miss this rivalry game.
6
Shonte' Cox-Flowers

Magic Johnson is a man of many versatile talents. He will always be first known as the NBA player who was skilled on the courts and who came out to share his story about living with HIV.