Award-winning actor James Earl Jones has acted on television, stage, and screen. He is best known for his deep bass voice.

The only child of Robert Earl and Ruth Connolly Jones, James Earl Jones was born on January 17, 1931, in Arkabutla, Mississippi. Before his son's birth, James's father left the family to pursue a career as a boxer and later as an actor. Ruth Jones left soon after to find work, leaving her separated from her son for long periods of time. This was during the Great Depression, a slowdown in the United States's system of producing, distributing, and using goods and services that caused millions of Americans to lose their jobs. Jones told Newsweek that being abandoned hurt him deeply. "No matter how old the character I play," he said, "those deep childhood memories, those furies, will come out. I understand this."

Jones lived at his grandparents' farm and hunted, fished, and performed various chores. He also attended church, where he watched his grandmother's dramatic displays of religious feeling. Eventually Jones's grandparents formally adopted him and took him north to Michigan. Jones struggled in his new surroundings. He developed a stutter and soon found communication so difficult that at certain periods during grammar school he could talk only to himself or his immediate family. The problem continued in high school, where an English teacher suggested he memorize speeches and enter speaking contests. This cured Jones of his problem.

Jones attended the University of Michigan on a full scholarship (money given to a student to attend college), intending to study medicine. At first he took acting classes as a hobby, but he soon switched his major to theater. When he was twenty-one years old and a junior at Michigan, he traveled to New York City to meet his father for the first time. The relationship was strained by the many years they had been apart, but Jones's father encouraged him to pursue a career in theater. James graduated from Michigan in 1953 with a bachelor's degree in drama. 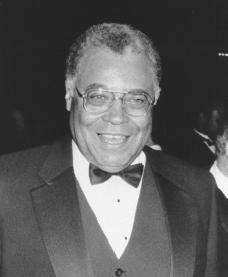 In 1953 Jones joined the army, serving in a ranger (a soldier who confronts the enemy at close range) training program in the Colorado mountains. He was set to reenlist in 1955 when his commanding officer suggested that he take a break before making a long-term commitment. Jones moved to New York City and enrolled in more acting classes. He lived with his father for a time, and the two earned extra money by polishing theater floors. In 1957 the younger Jones earned his first professional role in a production of Wedding in Japan. Although he was rarely out of work after that, his salary during the late 1950s averaged only forty-five dollars a week.

In 1959 Jones began a long stretch with the New York Shakespeare Festival, carrying a spear in Henry V. Before long he was given bigger roles, and in 1963 he played the lead in Othello, one of thirteen plays he appeared in that year. Othello ran for a year with Jones in the lead. He also found time to make one film appearance, in director Kubrick's (1928–1999) Dr. Strangelove. In the mid-1960s Jones became the first African American man to take a continuing role on a daytime soap opera when he played a doctor on As The World Turns.

In 1967, while Jones was touring Europe in Eugene O'Neill's (1888–1953) The Emperor Jones, he was given a copy of a play titled The Great White Hope. The story of the life of boxing champion Jack Johnson (1878–1946), The Great White Hope, was scheduled for a possible Broadway run. Jones wanted the part badly. He began working out to build his muscles, working with boxing managers, and watching old footage of Johnson's fights. He won the part, and the show opened on Broadway in October 1968.

The Great White Hope was a success. Jones won a Tony Award for his performance, and he was nominated (put forward for consideration) for an Academy Award in 1970 when the play was made into a motion picture. Still, Jones told TV Guide that his work in The Great White Hope did not prove to be the career boost he thought it would. He blamed racism (unequal treatment based on race) for the inability of several of his projects, including a life story of civil rights leader Malcolm X (1925–1965), to be approved for production.

Jones returned to the stage, appearing in Hamlet (1972), King Lear (1973), and Of Mice and Men (1974). He also performed in a series of minor films, including The Man and The Bingo Long Traveling All-Stars and Motor Kings. Jones's most popular movie role of the 1970s and early 1980s was one in which only his voice was used. He gave a memorable level of evil to the villain Darth Vader in all three Star Wars films.

In 1982 Jones appeared in the film Conan, the Barbarian. To critics who questioned why he took roles in second-rate films, Jones had a simple reply: movies and television pay well, theater does not. "I can't afford to take a vacation unless I do some commercials when I'm in New York," he pointed out in the Saturday Review. "Money goes fast, and you can't get along doing only stage work." In 1991 Jones appeared in a series of television ads for the Bell Atlantic Yellow Pages.

Jones's work in the late 1980s and early 1990s was as varied as his early career. He played a writer in Field of Dreams (1990), a Central Intelligence Agency (CIA) chief in Patriot Games (1992), and a judge in Sommersby (1994). On television he starred as a private investigator in Gabriel's Fire and as a police officer in Under One Roof. He earned another Tony Award in 1988 for his portrayal of a Negro League baseball player in the play Fences.

In 1990 Jones announced that his age and health were forcing him to cut back his work in live theater. Jones stressed that he did not plan to retire from the theater completely; he simply wanted to spend more time on other projects. In 1993 Voices and Silences, his autobiography (the story of his one's own life), was published. Jones and his second wife, actress Cecilia Hart, have one son. Looking toward the future, Jones sees no lack of opportunities in show business. "There are lots of wonderful cameos (roles in which only a brief appearance is made) and a lot of good lead roles out there," he concluded in the Los Angeles Times. "There are a lot of things I can do."

In September 2001 Jones was the first speaker at a service in York's Yankee Stadium to honor the victims of the terrorist attacks on the United States twelve days earlier. In January 2002 city officials in Lauderhill, Florida, invited Jones to speak at their annual Martin Luther King, Jr. (1929–1968) Day Celebration. A plaque was unveiled that mistakenly paid tribute to James Earl Ray, the man convicted of shooting and killing King, rather than James Earl Jones.