I mhotep was an ancient Egyptian genius who achieved great success in a wide variety of fields. Inventor of the pyramid, author of ancient wisdom, architect, high priest, physician, astronomer, and writer, Imhotep's many talents and vast acquired knowledge had such an effect on the Egyptian people that he became one of only a handful of individuals of nonroyal birth to be deified, or promoted to the status of a god.

Second in a long line of architects

Imhotep, or "he who cometh in peace," was born in Ankhtowe, a suburb of Memphis, Egypt. The month and day of his birth are noted precisely as the sixteenth day of Epiphi, third month of the Egyptian harvest (corresponding to May 31) but the year is not definitely recorded. It is known that Imhotep was a contemporary (living in the same time period) of the Pharaoh, or king of Egypt, Zoser (also known as Neterikhet) of the Third Dynasty. But estimates of the era of his reign vary by as much as three hundred years, falling between 2980 and 2600 B.C.E.

Imhotep's father, Kanofer, a celebrated architect, was later known to be the first of a long line of master builders who contributed to Egyptian works through the reign of King Darius the First (522–486 B.C.E. ). His mother, Khreduonkh, who probably came from the province of Mendes, is known today for having been deified alongside her son, an Egyptian custom.

The office of the vizier in politics was literally described as "supervisor of everything in this entire land." Only the best educated citizen could handle the range of duties of this position that worked closely with the Pharaoh, or king of Egypt. As vizier, Imhotep was chief advisor to Zoser in both religious and practical matters, and he controlled the departments of the Judiciary (court system), Treasury, War, Agriculture, and the General Executive.

There are no historical records of Imhotep's acts as a political figure, but his wisdom as a religious advisor was widely recognized after he ended a terrible famine (a severe shortage of food) that dominated Egypt during seven years of Zoser's reign. It is said that the king was failing in his responsibility to please the god Khnum, and his neglect was causing the Nile to fall short of a flood level which would support Egyptian farms. Imhotep, having a vast knowledge of the proper traditions and methods of worship, was able to counsel Zoser on pleasing 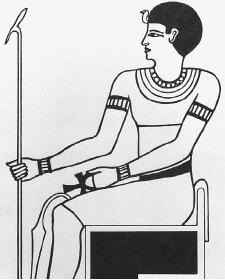 Imhotep.
Courtesy of the
Library of Congress
.
the god of the cataract (heavy rain), allowing the Nile to return to its usual flood level.

Architect of the famous pyramid at Sakkara

The Step Pyramid at Sakkara is the only of Imhotep's achievements that can still be seen and appreciated today. Its reputation is largely based on Imhotep's accomplishments as the pyramid's inventor and builder. This pyramid was the first structure ever built of cut stone, and is by far the oldest of the Seven Wonders of the World, the seven structures of the ancient world that were astonishing accomplishments for their time. It took twenty years to complete—not very long, given the newness of the idea and the state of structural science in the Bronze Age (between 3000 B.C.E. and 1100 C. E.), the period of development where metals, particularly bronze, were used for the first time.

Imhotep wanted the tomb to accommodate the Pharaoh's rise into the heavens. To do this, he planned to improve upon the flat, rectangular mastabas, or built-in benches, which were the traditional tombal structures. The pyramid was raised on top of the base mastabas in five smaller steps, one on top of the other. He added a passageway on the north side issuing upward within the structure from a sarcophagus chamber (where the stone coffin holding the mummy is kept) seventy-five feet below ground. The total height of the pyramid and base is just under two hundred feet, unimaginably large for a single structure before Imhotep's design.

The project at Sakkara was designed in its entirety as a way for the deceased to perform the rituals of the jubilee festival, or Hebsed. The complex consisted of many other buildings, as well as ornamental posts some thirty-seven feet high. The protection of the king and his burial gifts—about thirty-six thousand vessels (containers) of alabaster, dolomite, aragonite, and other precious materials—was the other primary function of the burial site. The entire complex, about one-quarter by one-half mile in area, was enclosed within a stone wall about thirty-five feet high. Imhotep added several false entrances to throw off possible tomb raiders. As a final measure, the king's treasure was lowered through vertical shafts around the tomb into a long corridor one hundred feet below ground. The digging of just this corridor without machines of any kind is an amazing accomplishment by modern standards.

It is likely that Imhotep was the architect and master builder of many other projects completed during a forty-year period of the Third Dynasty, though none of them compare in size or stylistic influence to the burial site at Sakkara. Imhotep was also the author of an encyclopedia of architecture that was used as a reference tool by Egyptian builders for thousands of years.

As a god of medicine, Imhotep was beloved as a curer of everyday problems who could "provide remedies for all diseases," and "give sons to the childless." Members of the cult of Imhotep in the Twenty-sixth and Twenty-seventh Dynasties (between 525 B.C.E. and 550 C. E.) would pay tribute to the God at his temple just outside Memphis. The temple also contained halls devoted to the teaching of medical methods, and to the preservation of the materia medica, which details the entirety of Egyptian medical knowledge which may actually have originated with Imhotep.

Imhotep's name was often grouped with such powerful deities as Thoth, God of Wisdom, Isis, the wonder-worker, and Ptah, a healer and the ancient God of Memphis. Although other humans were deified by the Egyptians, Imhotep is unique for being known by his own name as a god inferior in power only to Re (chief Sun-God). Imhotep was also a member of the great triad of Memphis, with Ptah, Imhotep's father among the gods, and Sekhmet, a goddess associated with childbirth.

It is a matter of debate today how much of Imhotep's reputation as a curer of disease stems from medical skill and how much comes from his command of magic and healing rituals.

i just don't understand why as black people we don't know anything about Imhotep and all his accomplishments. But when we went to school we learned about Albert Einstein, yet he is the one who introduced the formula which created the most destructive weapons of mankind. But they want us to acknowledge Einstein as humanities greatest thinker. How can we be taught to acknowledge such men without being educated on the one who birthed their knowledge?
2
T. Q.

Black? White? Nonsense. It is a matter of selectivity. In the past it was sometimes based on race, but more often, both historically and modern, based on ethnic, nationalistic, and religious biases. You don't learn about the Semite Sargon, or the Chinese Fu-Shang, and probably not about the Gracchi. You will not learn about everybody anywhere. Selections must be made. They are made for different reasons. Looking at everything through race-obsessed eyes will cripple your intelligence as well as your heart.
3
Jones

Not obsessed with ethical perception, but observant about factual evidence that has been hindered with and intent to oppress, and make a certain group superior and another inferior. Suppress a people's history and accomplishment s and they will never recognize their possibilities.
4
jazmyne

Imhotep means "comes in peace."
I understand the African-American desire to claim ancient Egyptians, but while I'm sure many were of mixed race, much evidence, genetic and otherwise, indicates the original peoples who became the Egyptians had migrated from the eastern Mediterranean, not from lower Africa.
I haven't verified everything in this article, but one error immediately springs to my eyes.
Imhotep's medical treateses were remarkable for having no magical references.
His remedies for a great famine are recorded on a stele.
Does anyone note a likenes to the Biblical story of Joseph? Any thoughts on that? A Biblical borrowing?
6
helen

learned about the pyramids years ago.good to be revisiting these notes agian. though Imhotep means chief son-god.
7
CJ

First thing first there is no such thing as a black or white person, or African -american!! History has been distorted and altered by what some call the pope!!! Check your history for real on your own check all pieces of info. Africa is the continent not a country or state! Look at globe and Egypt is in Africa which is also known as the cradle of life. All life stems from a continent that is older than we know and unimaginable richs!!! And as for your info.as all life stems from Africa so it is that the true giants of this world have been fooled and have stifled their own history, voices,and power! Know your true history and stop talking so much and start reading,digging,and asking more questions!!! Evolve and grow in the truth and life. https://youtu.be/-zRi7IoPjho. Listen and learn!! Check for yourself