Considered the first professional distinguished writer in the United States with short stories like "Rip Van Winkle" and "The Legend of Sleepy Hollow," Washington Irving was influential in the development of the short story form and helped to gain international respect for American literature.

Washington Irving was born and raised in New York City, the youngest of eleven children of a prosperous merchant family. Named after President George Washington (1732–1799), Irving was fascinated by the upper class of New York City and would often sneak out of family prayer meetings to attend the local theatre. 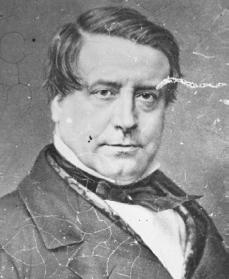 Washington Irving.
Courtesy of the
Library of Congress
.

A dreamy and uninspired student, Irving apprenticed (worked to gain experience in a trade) himself in a law office rather than follow his elder brothers to nearby Columbia College. In his free time, he read avidly and wandered when he could around the misty, rolling Hudson River Valley. This area just north of New York City was steeped in local folklore and legend and served as an inspiration for his later writings.

As a nineteen-year-old, Irving began contributing letters under the pseudonym (assumed name) Jonathan Oldstyle to a news-paper owned by his brother Peter. His first book, Salmagundi (1807–08), was a collaboration with another brother, William, and their friend James Kirke Paulding. This highly popular collection of short pieces poked fun at the political, social, and cultural life of the city.

Irving enjoyed a second success in 1809 with A History of New York, from the Beginning of the World to the End of the Dutch Dynasty, a comical and purposefully inaccurate account of New York's Dutch colonization (settlement by a foreign nation) narrated by another pseudonym Diedrich Knickerbocker, a Dutch American.

Irving's carefree social life and literary successes were shadowed at this time, however, by the death of his fiancée, Matilda Hoffmann. For the next several years he floundered, wavering between a legal and writing career.

In 1815 Irving moved to England to work in the failing Liverpool branch of the family import-export business. Within three years the company was bankrupt, and, finding himself at age thirty-five without means of support, Irving decided that he would earn his living by writing. He began recording the impressions, thoughts, and descriptions, which he reworked several times. These became the pieces that make up The Sketch Book. The volume was introduced under the pseudonym of Geoffrey Crayon.

Remaining in Europe for more than a decade after the appearance of The Sketch Book, Irving wrote steadily, and soon published Bracebridge Hall; or, the Humorists: A Medley (1822), which centers loosely around a fictitious English clan that Irving had introduced in The Sketch Book.

After 1824 Irving increasingly turned his attention from fiction and descriptive writing toward history and biography. He lived for several years in Spain, serving as a diplomatic attaché (a person who works for their government in a foreign country) to the American embassy in Spain while writing a life of Christopher Columbus (1451–1506) and a history of Granada, Spain. Irving served as secretary to the American embassy in London from 1829 until 1832, when he returned to the United States.

After receiving warm praise from the literary and academic communities, Irving set out on a tour of the rugged western part of the country, which took him as far as Oklahoma. The expedition resulted in three books about the region, notably A Tour on the Prairies (1835), which provided easterners with their first description of life out west by a well-known author. Irving eventually settled near Tarrytown, New York, at a small estate on the Hudson River, which he named Sunnyside.

Among the notable works of Irving's later years is an extensive biography of George Washington (1732–1799), which he worked on determinedly, despite ill health, from the early 1850s until a few months before his death in 1859. As America's first literary star with stories like "Rip Van Winkle" and "The Legend of Sleepy Hollow," Irving established an artistic standard and model for later generations of American short story writers.

What school and/or college did Washington Irving attend?
2
blondie

How can I find out about his furniture? I think someone was trying to sell me an item said to have been in his cabin in the woods?