The Norwegian playwright Henrik Ibsen made a tremendous impact on the course of Western drama. The best of his plays portray the real-life problems of individuals, with a skillful use of dialogue (conversation between individuals in a play) and symbols.

Henrik Ibsen was born on March 20, 1828, in Skien, Norway. His father was a successful merchant. When Ibsen was eight, his father's business failed, which was a shattering blow to the family. Ibsen left home at age fifteen and spent six years as a pharmacist's (one who prepares and sells drugs that are ordered by doctors) assistant in Grimstad, Norway, where he wrote his first play. In 1850 he moved to Christiania (Oslo), Norway, to study. In 1851 he became assistant stage manager of a new theater in Bergen, Norway, where part of his job was to write one new play a year. Although these plays were mostly unsuccessful, Ibsen gained valuable theater experience.

Ibsen returned to Christiania in 1857, where he spent the worst period of his life. His plays either failed or were rejected, and he went into debt. He left Norway in 1864, spending the next twenty-seven years in Italy and Germany. He changed his appearance, his habits, and even his handwriting. He became distant, secretive, and desperate to protect himself from the real and imagined hostility of others.

The main character in Catiline (1850), Ibsen's first play, is torn between two women who represent conflicting forces in himself. Ibsen's other early plays show him struggling to find his voice. The two plays he wrote during his second stay in Christiania were more successful: Love's Comedy (1862), which pokes fun at romantic love, and The Pretenders (1864), a historical and psychological (relating to the mind) tragedy (a serious drama that usually ends with the hero's death).

In the first ten years after leaving Norway Ibsen wrote four plays, including the immensely successful Brand (1866), about a man's attempt to understand himself. His next play, Peer Gynt (1867), made Ibsen Scandinavia's most discussed dramatist. Peer Gynt is Brand's opposite, a man who ignores his problems until he loses everything, including himself. Ibsen called Emperor and Galilean (1873), a ten-act play, "a world-historical drama."

Inspired by the demands of critics that literature should address current problems of the day, Ibsen set out to develop a dramatic form in which serious matters could be dealt with using stories about everyday life. Ibsen did not invent the realistic (based on real life) or social reform play, but he perfected the form. In doing so he became the most famous dramatist of the nineteenth century. Still, Ibsen 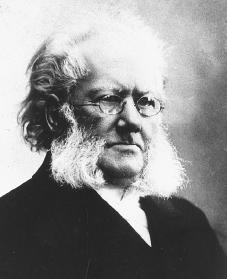 Henrik Ibsen.
Reproduced by permission of
AP/Wide World Photos
.
remained what he had always been, a man who disliked society and concerned himself only with the individual and his problems.

As used by George Bernard Shaw (1856–1950), a great supporter of Ibsen's work, the term "Ibsenite" describes a play that exposes individual and social hypocrisy (pretending to be what one is not). Examples are Pillars of Society (1877) and A Doll's House (1879), which point out how the conventions of society hinder personal development. In Ghosts (1881), however, the character of Mrs. Alving discovers that there are forces within the individual more destructive than the "dollhouse" of marriage and society. The last of the "Ibsenite" plays, An Enemy of the People (1882), is one of Ibsen's finest comedies.

After 1882 Ibsen concentrated more on the problems of the individual. The Wild Duck (1884) shows how the average man needs illusions (unreal and misleading thoughts or ideas) to survive and what happens to a family when it is forced to face the truth. In Rosmersholm (1886) a man raised in a tradition of Christian duty and sacrifice tries to break with his past. Hedda Gabler (1890) is the story of an unhappy woman who attempts to interfere with the lives of others. There is much of Ibsen, as he saw himself at the time, in Hedda Gabler.

Many of Ibsen's last plays represent confessions of his sins. The Master Builder (1892), one of Ibsen's most beautiful dramas, is the story of an artist consumed by guilt over the wife and children he has "murdered" to further his ambition. John Gabriel Borkman (1896) is a study of a man who sacrifices everything to his vision and is killed by the forces in nature he has sought to control. Ibsen's last play, When We Dead Awaken (1899), is an artist's confession of his failure as a man and of his doubts about his achievement. Soon after this play Ibsen suffered a stroke that ended his career. He died on May 23, 1906, in Christiania.