After a thirty-two year career with Ford Motor Company, including eight years as president, Lee Iacocca engineered one of business history's greatest comebacks at Chrysler Corporation. His success, coupled with appearances in television commercials and his best-selling book, made him one of the nation's most known and admired businessmen.

Lido Anthony Iacocca was born October 15, 1924, in Allentown, Pennsylvania, the son of Italian immigrants Nicola and Antoinette. Iacocca grew up in comfortable surroundings learning the nuts and bolts of business from his father who worked as a cobbler, hot dog restaurant owner and a theater owner. Nicola was a businessman who taught his son about the responsibilities of money and the need for a strong drive and a great vision in order to build a thriving business. Nicola also ran one of the first car rental agencies in the country and passed on his love of the automobile to his son.

Iaccoca's enlistment in the military during World War II (19139–45) was denied because of his childhood battle with rheumatic fever, a terrible disease that can cause permanent damage to the heart. He earned an undergraduate degree in engineering from Lehigh University and later earned a master's degree from Princeton University. Even as a teenager, Iacocca decided that he was going to be an automobile company executive and focused his studies in that direction. He secured a much sought-after engineering trainee job at Ford Motor Company in 1946, but put off his start until he completed his master's degree at Princeton.

Joining Ford as an engineering trainee in 1946, Iacocca soon entered the fast pace of sales. In 1960, at age thirty-six, he sped into the vice presidency and general managership of the company's most important unit, Ford Division. In 1964, with others on his staff, he launched the Ford Mustang, which, thanks to brilliant styling and marketing, introduced a new wave of sports cars, set a first-year sales record for any model, gave its name to a generation, and landed its creator's picture on the covers of Time and Newsweek.

In 1960 Iacocca was named Ford's vice president of the car and truck group; in 1967, executive vice president; and in 1970, president. Pocketing an annual salary and bonus of $977,000, the flashy executive also earned a reputation as one of the greatest salesmen in U.S. history. Of Iacocca, it has been said that he was always selling, whether products, ideas—or himself.

From Ford to Chrysler

Iacocca was let go from Ford Motor Company in June 1978 by Chairman Henry Ford II for reasons Ford never revealed. Though bitter at being dismissed from Ford, Iacocca was not out of the car business for long. Five months after his dismissal, Iacocca was named president of Chrysler (becoming chairman in 1979) and began transforming the number three automaker from a sluggish moneymaker into a highly profitable business.

How was Chrysler turned around? By downsizing (to make smaller) expenses to a much lower break-even point; by winning approval of $1.5 billion in federal loan guarantees; by selling off profitable units such as the tank division; and by introducing timely products. In addition, Chrysler welcomed, for the first time in U.S. corporate history, a union president to a board of directors. In 1984 the company posted profits of $2.4 billion (higher than in the previous sixty years combined), and in 1985 it bought Gulf-stream Aerospace Corporation for $637 million and E. F. Hutton Credit Corporation for $125 million.

In the early 1980s Chrysler issued the K-car and what would later become its best seller—the minivan. Just as the Mustang reestablished the sports car for Ford, the minivan would be loved by the young family in need of room and efficiency and revitalize Chrysler. In 1983 Chrysler paid the government back its loans and Iacocca became a star, a symbol of success and the achievement of the American dream.

Along with spearheading Chrysler's rise, Iacocca took leadership roles in many noteworthy causes, most notably the chairmanship of the President's Statue of Liberty-Ellis Island Centennial Commission, which was set up to raise funds for and to oversee restoration of the two monuments in New York City. While Iacocca gained a worldwide reputation through business leadership, television commercials, and association with the Statue of Liberty, he gained much additional exposure through his 1984 autobiography (a book written by someone about their life). Iacocca: An Autobiography, the best-selling nonfiction hardcover book in history, had two million copies in print by July 1985.

By the mid-1980s Iacocca had achieved folk-hero status. The Saturday Evening Post described him as "the sex symbol of America" and Reader's Digest as "the living embodiment of the American dream." Talk of Iacocca-for-president became increasingly widespread, and a 1985 poll of 1988 presidential preferences showed that the cocky industrialist trailed Vice President George Bush (1924–) by only three percentage points (41 to 38 points).

The late 1980s and early 1990s were not as kind to Iacocca. His public image, like Chrysler's earnings, began to fall. At a time when the American people, in the grip of a recession (a temporary slowing of the economy), criticized the huge paychecks of executives whose companies were hurting, Iacocca who had once achieved a publicity coup (takeover) when, for a time, he only accepted one dollar a year from Chrysler, was paid a 1987 salary of $18 million. In addition, Iacocca, criticized Japanese trading practices, blaming them for the ills that American car manufacturers had suffered. Critics stated that the American public believed that Japanese cars were superior 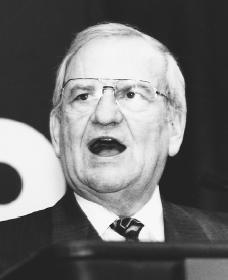 Lee Iacocca.
Reproduced by permission of
AP/Wide World Photos
.
and instead of criticizing the Japanese, Iacocca's car company should have competed with them. At the end of 1992, Iacocca retired. He remained a consultant to Chrysler, with a $500,000 thousand a year salary and use of the company jet, until the end of 1994.

In 1995 Iacocca announced that he was taking Chrysler to court, claiming that it unlawfully blocked him from exercising $42 million in share options that he had earned while he was the chairman. Chrysler claimed that Iacocca's role as an adviser to Kirk Kerkorian, the investor who wanted to purchase the company, violated the share option plan agreement. Although Kerkorian's bid failed to materialize because he was unable to raise the financial backing, Chrysler agreed to pay Iaccoca $21 million to settle the lawsuit. Iacocca continued to work as Kerkorian's consultant.

Iacocca and Mary McCleary were married in 1956 and had two daughters, Kathi and Lia. Mary died of diabetes (a blood disorder) in 1983, and in her memory, Iacocca donated his book earnings to diabetes research. Two later marriages, to advertising executive Peggy Johnson (1986) and restaurateur Darrien Earle (1990), ended in divorce. In 1999 Iacocca announced his latest venture, E-bikes. Iacocca believes these electronically motorized bikes will take the place of mopeds and other loud and polluting vehicles in crowded urban areas. Only time will tell if Iacocca's latest work will be as popular as his previous successes.