The work of American fiction writer Nathaniel Hawthorne was based on the history of his Puritan ancestors and the New England of his own day. Hawthorne's The Scarlet Letter and The House of the Seven Gables are classics of American literature.

Nathaniel Hawthorne was born in Salem, Massachusetts, on July 4, 1804, into the sixth generation of his Salem family. His ancestors included businessmen, judges, and seamen—all Puritans, a strict religious discipline. Two aspects of his background especially affected his imagination and writing career. The Hathornes (Nathaniel added the "w" to the name) had been involved in religious persecution (intense harassment) with their first American ancestor, William. Another ancestor, John Hathorne, was one of the three judges at the seventeenth-century Salem witchcraft trials, where dozens of people were accused of, and later executed for, being "witches."

Nathaniel's father, a sea captain, died in 1808, leaving his wife and three children dependent on relatives. Nathaniel, the only son, spent his early years in Salem and in Maine. A leg injury forced Hawthorne to remain immobile for a considerable period, during which he developed an exceptional taste for reading and thinking. His childhood was calm, a little isolated but far from unhappy, especially since as a handsome and attractive only son he was idolized by his mother and his two sisters.

With the aid of his wealthy uncles, Hawthorne attended Bowdoin College from 1821 to 1825. Among his classmates were poet Henry Wadsworth Longfellow (1807–1882), and future U.S. president Franklin Pierce (1804–1869). At Bowdoin, Hawthorne read widely and received solid 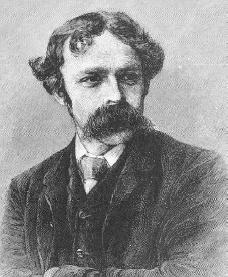 Nathaniel Hawthorne.
instruction in English composition and the classics, particularly in Latin. His refusal to participate in public speaking prevented his achievement of an outstanding academic record, but he was in good standing. On one occasion he was fined 50 cents for gambling at cards, but his behavior was not otherwise singled out for official disapproval. Though small and isolated, the Bowdoin of the 1820s was an unusually good college, and Hawthorne undoubtedly profited from his formal education. He also made loyal friends.

Returning from Bowdoin, Hawthorne spent the years 1825 to 1837 in his mother's Salem household. Later he looked back upon these years as a period of dreamlike isolation and solitude, spent in a haunted room. During these "solitary years" he learned to write tales and sketches that are still unique.

Recent biographers have shown that this period of Hawthorne's life was less lonely than he remembered it to be. In truth, he did have social engagements, played cards, and went to the theatre. Nevertheless, he consistently remembered these twelve years as a strange, dark dream, though his view of the influence of these years varied.

Most of Hawthorne's early stories were published anonymously (without an author's name) in magazines and giftbooks. In 1837 the publication of Twice-Told Tales somewhat lifted this spell of darkness. After Twice-Told Tales he added two later collections, Mosses from an Old Manse (1846) and The Snow-Image (1851), along with Grandfather's Chair (1841), a history of New England for children. Hawthorne's short stories came slowly but steadily into critical favor, and the best of them have become American classics.

By his own account it was Hawthorne's love of his Salem neighbor Sophia Peabody that brought him from his "haunted chamber" out into the world. His books were far from profitable enough to support a wife and family, so in 1838 he went to work in the Boston Custom House and then spent part of 1841 in the famous Brook Farm community in hopes of finding a pleasant and economical home for Sophia and himself.

Hawthorne and Sophia, whom he finally married in 1842, resorted not to Brook Farm but to the Old Manse in Concord, Massachusetts, where they spent several years of happiness in as much quiet living as they could achieve. Concord was home to Ralph Waldo Emerson (1803–1882), Henry David Thoreau (1817–1862), and Ellery Channing (1780–1842), and Hawthorne was in frequent contact with these important thinkers, though he did not take to their philosophical lifestyles.

Facing the world once more, Hawthorne obtained in 1846 the position of surveyor (one who maps out new lands) in the Salem Custom House, but was relieved of this position in 1848 because of his political ties. His dismissal, however, turned out to be a blessing, since it gave him time in which to write his greatest success, The Scarlet Letter.

The period 1850 to 1853 was Hawthorne's most productive, as he wrote The House of the Seven Gables and The Blithedale Romance, along with A Wonder Book (1852) and Tanglewood Tales (1853). During 1850 the Hawthornes lived at the Red House in Lenox in the Berkshire Hills, and Hawthorne formed a memorable friendship with novelist Herman Melville (1819–1912). The association was more important to Melville than to Hawthorne, since Melville was fifteen years younger and the much more impressionable (easily influenced) of the two men. It left its mark in dedication of his Moby-Dick, and in some wonderful letters.

In 1852 Franklin Pierce was elected president of the United States, and Hawthorne, who wrote his campaign biography, was appointed to the important overseas post of American consul (advisor) at Liverpool, England. He served in this post from 1853 to 1857. These English years resulted in Our Old Home (1863), a volume drawn from the since-published "English Note-Books."

In 1857 the Hawthornes left England for Italy, where they spent their time primarily in Rome and Florence. They returned to England, where Hawthorne finished his last and longest complete novel, The Marble Faun (1860). They finally returned to the United States, after an absence of seven years, and took up residence in their first permanent home, The Wayside, at Concord.

Although he had always been an exceptionally active man, Hawthorne's health began to fail him. Since he refused to submit to any thorough medical examination, the details of his declining health remain mysterious. Hawthorne died on May 19, 1864. He had set off for the New Hampshire hills with Franklin Pierce, an activity he had always enjoyed, hoping to regain his health. But he died the second night in Plymouth, New Hampshire, presumably in his sleep.

Hawthorne once said that New England was enough to fill his heart, yet he sought the broader experience of Europe. Modest in expectations, he had nonetheless desired to live fully. Hawthorne's life and writings present a complex puzzle. A born writer, he suffered the difficulties of his profession in early-nineteenth-century America, an environment unfriendly to artists.

this is very interesting i would like to be in this sorry but it was also sad to see him die like that. he been through a lot too
2
Luis

How can we find out the truth about Nathaniel Hawthrone, The Scarlet Letter, Puritans, and how they are all related.
In such a way that we consider...
- The Puritans family life
- The Puritan society
- The Puritans might not have been bad
- That all of our information must be summarized, fully detailed, and containing a main idea