For almost half a century William Randolph Hearst was the American publisher, editor, and proprietor (business owner) of the most extensive journalistic empire ever assembled by one man. His personality and use of wealth permanently left a mark on American media.

On April 29, 1863, William Randolph Hearst was born in San Francisco, California. He received the best education that his multimillionaire father and his sophisticated schoolteacher mother (more than twenty years her husband's junior) could buy—private tutors, private schools, grand tours of Europe, and Harvard College. Hearst's father had been a keen geologist (student of the earth's history as recorded in rocks) and lucky gold miner during the 1849 Gold Rush. As 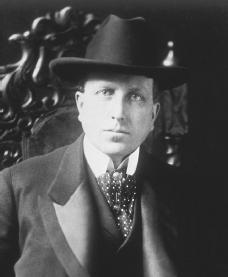 William Randolph Hearst.
Courtesy of the
Library of Congress
.
partner in some of the largest mines in America, George Hearst easily entered politics as a California Senator. To help him politically, he purchased the then failing San Francisco Examiner. Meanwhile, his son, William Randolph, was routinely being expelled from school due to pranks. He was even expelled from Harvard after sending engraved silver chamber pots (prior to indoor plumbing, people kept pots under their beds to use for relieving themselves at night) to his professors. But Hearst inherited his father's ambition and energy. William's mother, the cultured parent, took William on two art tours in Europe before he was sixteen years old.

Young Hearst's journalistic career began in 1887, two years after his Harvard expulsion. "I want the San Francisco Examiner, " he wrote to his father, who owned the newspaper and granted the request.

When William's father died, he left his millions in mining properties, not to his son, but to his wife—who compensated by giving her son ten thousand dollars a month until her death. In turn the gray-eyed, soft-spoken William Randolph Hearst invested frantically and heavily.

The Daily Examiner became young Hearst's laboratory, where he gained a talent for making fake news and faking real news in such a way as to create maximum public shock. From the outset he obtained top talent by paying top prices.

To get an all-star cast and an audience of millions, however, Hearst had to move his headquarters to New York City, where he immediately purchased the old and dying New York Morning Journal. Within a year Hearst ran up the circulation from seventy-seven thousand to over a million by spending enough money to beat the aging Joseph Pulitzer's World at its own sensationalist (scandalous) game. Sometimes Hearst hired away the World 's more aggressive executives and reporters; sometimes he outbid all competitors in the open market. One of Hearst's editors was paid twice as much in salary as the sale price of the New York World.

During the last five years of the nineteenth century, Hearst set his pattern for the first half of the twentieth century. The Journal supported the Democratic Party, yet Hearst opposed the campaign of Democratic presidential candidate William Jennings Bryan (1860–1925) in 1896. In 1898 Hearst backed the Spanish-American War (1898; a war in which the United States aided Cuba in its fight for freedom from Spanish rule), which Bryan and the Democrats opposed. Further, Hearst's wealth cut him off from the troubled masses to whom his newspapers appealed. He could not grasp the basic problems the issue of the war with Spain raised.

Having shaken up San Francisco with the Examiner and New York City with the Journal, Hearst established two newspapers in Chicago, Illinois, the Chicago American in 1900 and the Chicago Examiner in 1902; a newspaper in Boston, Massachusetts, the Boston American; and a newspaper in Los Angeles, California, the Los Angeles Examiner in 1904. These added newspapers marked more than an extension of Hearst's journalistic empire, they reflected his sweeping decision to seek the U.S. presidency. Perhaps his ambition came from a desire to follow in his father's footsteps. His personality and fortune were not suited to a political career however.

In 1902 and 1904 Hearst won election to the House of Representatives as a New York Democrat. Except, his journalistic activities and his $2 million presidential campaign left him little time to speak, vote, or answer roll calls in Congress. His nonattendance angered his colleagues and the voters who had elected him. Nevertheless, he found time to run as an independent candidate for mayor of New York City in 1905, and as a Democratic candidate for governor in 1906. His loss in both elections ended Hearst's political career.

In 1903, the day before his fortieth birthday, he married twenty-one-year-old Millicent Willson, a showgirl, thus giving up Tessie Powers, a waitress he had supported since his Harvard days. The Hearsts had five boys, but in 1917 Hearst fell in love with another showgirl, twenty-year-old Marion Davies of the Ziegfeld Follies. He maintained a relationship with her that ended only at his death.

When Hearst's mother died, he came into his inheritance and took up permanent residence on his father's 168,000-acre ranch in southern California. There he spent $37 million on a private castle, put $50 million into New York City real estate, and put another $50 million into his art collection—the largest ever assembled by a single individual.

During the 1920s one American in every four read a Hearst newspaper. Hearst owned twenty daily and eleven Sunday papers in thirteen cities, the King Features syndication service (organization that places featured articles or comics in multiple papers at once), the International News Service, the American Weekly (a syndicated Sunday supplement), International Newsreel, and six magazines, including Cosmopolitan, Good Housekeeping, and Harper's Bazaar.

Despite Hearst's wealth, expansion, and spending, his popularity with the public as well as with the government was low. Originally a progressive Democrat, he had no bargaining power with Republican Theodore Roosevelt (1859–1919). Hearst fought every Democratic reform leader from Bryan to Franklin Roosevelt (1882–1945), and he opposed American participation in both world wars.

In 1927 the Hearst newspapers printed forged (faked) documents, which supported an accusation that the Mexican government had paid several U.S. senators more than $1 million to support a Central American plot to wage war against the United States. From this scandal the Hearst press suffered not at all.

In the next ten years, however, Hearst's funds and the empire suddenly ran out. In 1937 the two corporations that controlled the empire found themselves $126 million in debt. Hearst had to turn them over to a seven-member committee whose purpose was to save what they could. They managed to hold off economic failure only by selling off much of Hearst's private fortune and all of his public powers as a newspaper owner.

Davies, Marion. The Times We Had: Life with William Randolph Hearst. Indianapolis: Bobbs-Merrill, 1975.