British physicist and mathematician Stephen Hawking has made fundamental contributions to the science of cosmology—the study of the origins, structure, and space-time relationships of the universe.

Stephen William Hawking was born on January 8, 1942, in Oxford, England. His father, a well-known researcher in tropical medicine, urged his son to seek a career in medicine, but Stephen found biology and medicine were not exact enough. Therefore, he turned to the study of mathematics and physics.

Hawking was not an outstanding student at St. Alban's School, nor later at Oxford University, which he entered in 1959. He was a social young man who did little schoolwork because he was able to grasp the essentials of a mathematics or physics problem quickly. At home he reports, "I would take things apart to see how they worked, but they didn't often go back together." His early school years were marked by unhappiness at school, with his peers and on the playing field. While at Oxford he became increasingly interested in physics (study of matter and energy), eventually graduating with a first class honors in physics (1962). He immediately began postgraduate studies at Cambridge University.

The onset of Hawking's graduate education at Cambridge marked a turning point in his life. It was then that he embarked upon the formal study of cosmology, which focused his study. And it was then that he was first stricken with Lou Gehrig's disease, a weakening disease of the nervous and muscular system that eventually led to his total confinement in a wheelchair. At Cambridge his talents were recognized, and he was encouraged to carry on his studies despite his growing physical disabilities. His marriage in 1965 was an important step in his emotional life. Marriage gave him, he recalled, the determination to live and make professional progress in the world of science. Hawking received his doctorate degree in 1966. He then began his lifelong research and teaching association with Cambridge University.

Hawking made his first major contribution to science with his idea of singularity, a work that grew out of his collaboration (working relationship) with Roger Penrose. A singularity is a place in either space or time at which some quantity becomes infinite (without an end). Such a place is found in a black hole, the final stage of a collapsed star, where the gravitational field has infinite strength. Penrose proved that a singularity could exist in the space-time of a real universe.

Drawing upon the work of both Penrose and Albert Einstein (1879–1955), Hawking demonstrated that our universe had its origins in a singularity. In the beginning all of the matter in the universe was concentrated in a single point, making a very small but tremendously dense body. Ten to twenty billion years ago that body exploded in a big bang that initiated time and the universe. Hawking was able to produce current astrophysical (having to do with the study of stars and the events that occur around them) research to support the big bang theory of the origin of the universe and oppose the competing steady-state theory.

Hawking's continuing examination of the nature of black holes led to two important discoveries. The first, that black holes can give off heat, opposed the claim that nothing could escape from a black hole. The second concerned the size of black holes. As originally conceived, black holes were immense in size because they were the end result of the collapse of gigantic stars. Hawking suggested the existence of millions of mini-black holes formed by the force of the original big bang explosion. 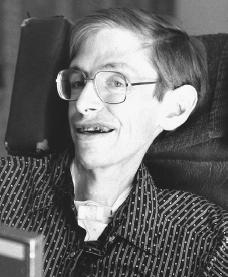 In the 1980s Hawking answered one of Einstein's unanswered theories, the famous unified field theory. A complete unified theory includes the four main interactions known to modern physics. The unified theory explains the conditions that were present at the beginning of the universe as well as the features of the physical laws of nature. When humans develop the unified field theory, said Hawking, they will "know the mind of God."

As Hawking's physical condition grew worse his intellectual achievements increased. He wrote down his ideas in A Brief History of Time: From the Big Bang to Black Holes. It sold over a million copies and was listed as the best-selling nonfiction book for over a year.

In 1993 Hawking wrote Black Holes and Baby Universes and Other Essays, which, in addition to his scientific thoughts, contains chapters about Hawking's personal life. He coauthored a book in 1996 with Sir Roger Penrose titled The Nature of Space and Time. Issues discussed in this book include whether the universe has boundaries and if it will continue to expand forever. Hawking says yes to the first question and no to the second, while Penrose argues the opposite. Hawking joined Penrose again the following year in the creation of another book, The Large, the Small, and the Human Mind (1997). In 2002 he was likewise celebrating the publication of The Universe in a Nutshell. Despite decreasing health, Hawking traveled on the traditional book release circuit. People with disabilities look to him as a hero.

Hawking's work in modern cosmology and in theoretical astronomy and physics is widely recognized. He became a fellow of the Royal Society of London in 1974 and five years later was named to a professorial chair at Cambridge University that was once held by Sir Isaac Newton (1642–1727). Beyond these honors he has earned a host of honorary degrees, awards, prizes, and lectureships from the major universities and scientific societies of Europe and America. By the end of the twentieth century Stephen Hawking had become one of the best-known scientists in the world. His popularity includes endorsing a wireless Internet connection and speaking to wheelchair-bound youth. He also had a special appearance on the television series Star Trek.

Though very private, it is generally known that Stephen's first marriage ended in 1991. He has three children from that marriage.

When asked about his objectives, Hawking told Zygon in a 1995 interview, "My goal is a complete understanding of the universe, why it is as it is and why it exists at all."

Ferguson, Kitty. Stephen Hawking: A Quest for a Theory of the Universe. New York: F. Watts, 1991.

I used to teach gen physics and somehow i included a bit of his works in some of my discussions. To study physics means digging a lot of embedded rocks underneath...i can't only imagine his difficulties or experiences he met at his first study of the universe...hope to see him soon...got to ask him a lot of questions :)
2
Aashna Sinha

We know that Stephen Hawking is one of the greatest scientists of our time. He suffers from a form of paralysis that confines him to a wheelchair and allows him to 'speak' only by punching buttons on a computer, which speaks for him in a machine-like voice. In this biography i meet a extraordinary man.
3
naureen fatma

I wanna know more about his childhood and more about the awards he won and about his marriage(s) because i have to do a proyect about Stephen Hawking life so can you please anwser my question asap because my proyect its due this tuesday thank you :)
5
Anand sah

About my think hawking is known as Master of the Univere..he wanted to know about the black hole...and he deserve it...i like to read about him and i want to be like him
6
jeffrey pacon

som invictus 23(jef)
His life is great; despite of all problems and hindrances in his life, he was able to contribute in the field of science and a very great works he had done.Maybe I did not intentionally read his life but I just browsing and surfing for my science project masterpiece when I attracted to found out what behind his life unique and somehow interesting.I got many lessons reading his life story;)
7
Chandan Kumar Sharma{Kahalgaon}

Stephen Hawking,the greatest scientist,is my favourite scientist.He's passed from many difficulties in his life.I have studied his book,A Brief History of Time.Lastly,I want to say that learn something fromh
8
Shankar Roy

Stephen Hawking is really an exceptional scientist in our generation. He still trying to solve the mistery of our universe inspite of his physical disabilities.

Stephen Hawking is not my inspiration only rather his thought, contribution in space science and biswas strength for survive in life , influenced me deeply.
So, i feel no doubt to state that Stephen Hawking is really the great scientist in this 21th century
9
Olivia

Stephen Hawking has shown perseverance through out his life time, he is truly amazing
10
Ali Rehmat

Stephen Hawking is one of the greatest scientists of our time.His life is great; despite of all problems and hindrances in his life
He set a great example to all of us aS far as perserverance is concerned.God bless him
11
Antony Reed

I am learning about steven Hawkins and im learning lots and especially he was a good scientist he was brave through his career and he was good and that I never knew if he was dead or not who ever gets this lucky you I wish that would be me but yet im still learning lots about him in health and social care and can not wait to see what life stages he has been through
12
L.Rodgers

Stephen Hawking was an awesome person, and is a very interesting person, lol