The works of the English novelist, poet, and dramatist Thomas Hardy unite the Victorian (c. 1840–1900) and modern eras. They reveal him to be a kind and gentle man, terribly aware of the pain human beings suffer in their struggle for life.

Thomas Hardy was born on June 2, 1840, in Higher Bockhampton in Dorset, England, which formed part of the "Wessex" of his novels and poems. The first of four children, Hardy was born small and thought at birth to be dead. He grew to be a small man only a little over five feet tall. Hardy learned to love books through his mother, Jemina, and was able to read before starting school. He was taught by his father, also named Thomas, to play the violin, and he often journeyed about the countryside playing for dances and storing up the impressions of rural life that make up so large a part of his work.

Hardy attended a private school in Dorchester, England, where he learned Latin, French, and German. In 1856 at the age of sixteen, Hardy became an apprentice (a person who works for someone in order to gain experience in a trade) to John Hicks, an architect in Dorchester. At this time he thought seriously of attending university and entering the Church, but he did not do so. In 1862 he went to London, England, to work. Also at this time, Hardy began writing poetry after being impressed by Reverend William Barnes, a local poet.

In London Hardy continued to write poetry and began sending his poems to publishers, who quickly returned them. He kept 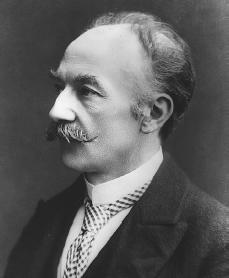 Thomas Hardy.
Reproduced by permission of
Archive Photos, Inc.
many of the poems and published them in 1898 and afterward. Back in Dorchester in 1867 while working for Hicks, he wrote a novel, The Poor Man and the Lady, which he was advised not to publish because it was too critical of Victorian society. Told to write a novel with a plot, he turned out Desperate Remedies (1871), which was unsuccessful.

Meanwhile Hardy had begun to work for Gerald Crickmay, who had taken over Hicks's business. Crickmay sent Hardy to Cornwall, England, where on March 7, 1870, he met Emma Lavinia Gifford, with whom he fell in love. Hardy could have kept on with architecture, but he was a "born bookworm," as he said, and in spite of his lack of success with literature he decided to continue writing, hoping eventually to make enough money so he could marry Gifford. Their courtship is recorded in A Pair of Blue Eyes and in some of Hardy's most beautiful poems, among them "When I Set Out for Lyonnesse" and "Beeny Cliff."

For Under the Greenwood Tree (1872) he earned 30 pounds and the book was well received. At the same time he was asked to write a novel for serialization (published in parts) in a magazine. In September 1872 A Pair of Blue Eyes began to appear, even though only a few chapters had been completed. Far from the Madding Crowd (1874), was published in magazines and was a success both financially and critically. Finally making a living from literature, Hardy married Gifford in September of 1874.

Hardy preferred his poetry to his prose (nonpoetry writings) and thought his novels merely a way to earn a living. But his best novels— The Return of the Native (1878), The Mayor of Casterbridge (1886), and Tess of the D'Urbervilles (1891)—were much more than magazine fiction. The people were dominated by the countryside of "Wessex," Hardy's name for the area in southwest England where he set most of his novels, and the area is as memorable as the people.

Good or bad, Hardy's novels brought him money, fame, and acquaintance with greatness. With his wife he travelled in Germany, France, and Italy; he built Max Gate near Dorchester, where he lived from 1886 until his death; he frequently dined out, meeting poets Matthew Arnold (1822–1888), Robert Browning (1812–1889), Alfred, Lord Tennyson (1809–1892), and others. Writer Robert Louis Stevenson (1850–1894) sought him out and visited him at Max Gate. It was a successful life and seemed happy enough, but he had a strained relationship with his wife.

Though Hardy's novels seldom end happily, he was not, he stated, a pessimist (taking the least hopeful view of a situation). He called himself a "meliorist," one who believed that man can live with some happiness if he understands his place in the universe and accepts it. He ceased to be a Christian, and he read the works of naturalist Charles Darwin (1809–1892) and accepted the idea of evolution, the theory that animals, including man, developed from earlier species. Later he took to reading philosopher Arthur Schopenhauer (1788–1860) and developed the notion of the Immanent Will, the blind force that drives the universe and in the distant future may see and understand itself.

Collecting new and old poems, Hardy published Wessex Poems (1898) and Poems of the Past and Present (1902). Then he began to publish The Dynasts, an immense drama of the Napoleonic Wars (a series of wars from 1792 to 1815 between France and different European powers) which depicts all the characters, even French emperor Napoleon Bonaparte (1769–1821), as a puppet whose actions are determined by the Immanent Will. The "epic-drama" evolved into nineteen acts and 130 scenes and was published in three parts in 1903, 1905, and 1908. Meant to be read, not acted, it is frequently called Hardy's masterwork.

Meanwhile Hardy continued to publish his shorter verse in Time's Laughingstocks (1909). His most famous single volume of poems, Satires of Circumstance, appeared in 1914. It revealed the extremes of Hardy's emotional range in the short, bitter poems referred to in the title and the longer poems about his first wife, who died in 1912. Selected Poems (1916), Moments of Vision (1917), Late Lyrics and Earlier (1922), and Human Shows (1925) were published during the remainder of his life. Winter Words (1928) was published after his death.

Because in most cases Hardy published his poems years after he wrote them, the dates of when he wrote these pieces can be determined only by his references to them in The Early Life of Thomas Hardy or The Later Years. Because of this it is difficult to show Hardy's growth as a poet. In fact, he hardly grew at all. In almost all his poems Hardy uses Victorian diction (choice of words), regular meters (rhythm), and neat stanzas (divisions within a poem). These cause him to be called a Victorian poet, but he also uses everyday words. These, with his dark view of the human condition and his blending of humor and pity, rank him with modern poets.

In 1914 Hardy married Florence Emily Dugdale, who had been his secretary for several years. He continued to receive famous visitors at Max Gate and continued to visit London for special occasions. He died on January 11, 1928. His heart was buried in the churchyard at Stinsford, England, his ashes in Westminster Abbey.