Confirmed as the sixteenth surgeon general of the United States on September 7, 1993, Joycelyn Elders is the first African American and the second female to head the U.S. Public Health Service. During her fifteen months as surgeon general, Elders added tobacco use, national health care, and drug and alcohol abuse to her list of major concerns.

Jocelyn Elders was born Minnie Jones on August 13, 1933, in the farming community of Schaal, Arkansas. She took the name Jocelyn in college. Living in a poor, segregated (separated based on race) area, she and her seven siblings worked in the cotton fields and attended an all-black school thirteen miles from home. Home itself was a three-room cabin that lacked an indoor toilet and electricity.

One of Elders's earliest memories was of being taught to read by her mother, who had an eighth grade education, which was quite remarkable for an African American woman at that time. By the time Elders neared graduation from high school, she had earned a scholarship to the all-black Philander Smith College in Little Rock, Arkansas. Initially college looked doubtful for Elders because her father did not want to let her go. However, her grandmother persuaded Elders's father to let her attend. Elders's family picked extra cotton to earn the $3.43 for her bus fare to Little Rock, and she became the first in her family to attend college.

At school, Elders was especially interested in the study of biology and chemistry and wanted to become a lab technician. Her goal changed when she heard a speech by Edith Irby Jones (1927–), the first African American to study at the University of Arkansas School of Medicine. Elders, who had not even met a doctor until she was sixteen, realized that she wanted to be a physician. After graduating from college, she joined the U.S. Army's Women's Medical Specialist Corps. In 1956 she entered the Arkansas Medical School on the G.I. Bill, which provided financial aid for schooling to former members of the armed forces. During this time she met her second husband, Oliver Elders, and they married in 1960.

After studying pediatrics (an area of medicine involving the care of children) at the University of Minnesota, Elders returned to Little Rock in 1961 for her residency, or medical training period. Over the next twenty years, she combined a successful office practice with research in pediatric endocrinology, the study of glands. She became an expert in growth problems and juvenile diabetes (a disorder that causes the body to have difficulty maintaining a healthy blood sugar level).

It was this branch of science that led her to study sexual behavior. Recognizing that diabetic females face a health risk if they become pregnant too young, Elders saw the urgent need to talk about the dangers of pregnancy with her patients and to distribute contraceptives (items used to prevent pregnancy) in order to limit those dangers. The results of her actions were clear. Of the 520 juvenile diabetics Elders treated, approximately 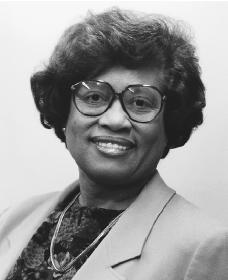 Joycelyn Elders.
Reproduced by permission of
AP/Wide World Photos
.
half were female, and only one became pregnant.

In 1986, the year before then-governor Bill Clinton (1946–) named Elders director of the Arkansas Department of Health, twenty percent of Arkansas's total births were to teenage mothers. By comparison, the national teenage birth rate was thirteen percent. Arkansas taxpayers paid huge amounts for the care of young Arkansas parents and their children. Elders was equally concerned with the large number of emotionally immature young adults who were becoming parents to unwanted children. She saw an urgent need for bolder government involvement and an intense public education campaign.

Elders glimpsed one of the approaches she would later support when she visited Arkansas's first school-based health clinic in Lincoln, where contraceptives were given to students on request and where senior-class pregnancies had fallen from thirteen to one. Under Elders, eighteen other school clinics opened, though only four of them distributed condoms (a specific type of contraceptive). As Elders campaigned for the clinics and expanded sex education throughout Arkansas, she battled with political conservatives who criticized her effort to increase the government's role in citizens' lives. She was also opposed by members of some religious groups who feared that the distribution of condoms would increase sexual activity and promote abortion (a woman's right to end a pregnancy).

Elders fought back by saying that she would gladly teach abstinence (the practice of not having sex) if she felt that such an approach would work. But in the real world, she argued, teens would continue to have sex, and it was the job of adults and of government to turn an irresponsible action into a responsible one. Such arguments proved convincing. In 1989 the Arkansas State Legislature ordered the creation of a kindergarten-through-twelfth-grade curriculum (courses that the students would study) including not only sex education but also instruction in hygiene (cleanliness that is important for health), substance-abuse prevention, self-esteem, and equal sexual responsibility among both males and females.

President Clinton's nomination of Elders for the post of U.S. surgeon general made her the second African American and fifth woman to be chosen for a cabinet position. However, some people were strongly against the president's choice. Elders was criticized for favoring abortion on demand (abortion without restriction). Her critics also did not agree with her support for medicinal use of marijuana, U.S. legalization of the RU-486 pill (which may be taken by a woman to end a pregnancy), and her urging television networks to air condom ads. She was also involved in a scandal regarding the National Bank of Arkansas, for which she had served on the board of directors. Nevertheless, Elders gained the backing of the American Medical Association and former U.S. surgeon general C. Everett Koop (1916–). In September 1993 the Senate approved her nomination by a sixty-five to thirty-four vote.

In January 1995 Elders returned to the University of Arkansas as a faculty researcher and a professor of pediatric endocrinology at Arkansas Children's Hospital. She continues to promote discussion of health-care issues as a public speaker and through such projects as assisting in the development of SexHealth.com , a website on sexual health.