Mamie Eisenhower, the wife of President Dwight D. "Ike" Eisenhower (1890–1969), represented what was to 1950s America the ideal American wife: She displayed quiet strength, found satisfaction in domestic duties, and supported her husband without hesitation. She also devoted time to various charities and helped preserve the history of the White House.

Mamie Geneva Doud was born in Boone, Iowa, on November 14, 1896. She was the second of four daughters born to John Sheldon Doud, a self-employed meat packer, and Elivera Mathilda Carlson Doud. Mamie was a happy, friendly, and charming girl. While she enjoyed school, she enjoyed after-school activities and social events even more. The Douds were a wealthy family and gave many parties and had visits from friends. Still, her father made sure that she learned practical lessons such as how to manage money, run a household, and shop for bargains.

When Mamie's older sister Eleanor developed a heart condition, doctors suggested that spending the winter in a warmer place might help her recover. Mamie's father bought a winter home in San Antonio, Texas. In 1915, while in San Antonio with her family, Mamie met Dwight D. "Ike" Eisenhower, a young army officer and high school football coach. They were immediately attracted to each other and were married the next year.

For Mamie Eisenhower, being a military wife was hard at first. She was used to life with the close and well-respected Doud family; being Mrs. Eisenhower meant less money and a smaller circle of friends. Over the next several decades she loyally followed her husband from assignment to assignment when she could and raised their family herself when she could not. Ike's pay was very low at first, and Mamie's father's advice on money matters came in handy during these times. Over the years, Ike became increasingly recognized as a military leader.

At the end of World War II (1939–45) Dwight was a national hero, and for Mamie this meant an adjustment to dealing with newfound fame as well as the opportunity to meet important world leaders. Dwight became president of Columbia University in 1948. Throughout her husband's years at Columbia, Mamie was a gracious hostess to many famous visitors.

When her husband decided to enter the presidential race in 1952, Mamie—a self-described homebody—realized that she would have to get used to being in the public eye. "There would be nothing he would ask during the campaign that I would not do," she recalled. As a campaign wife she agreed to daily appearances and interviews and answered thousands of letters. 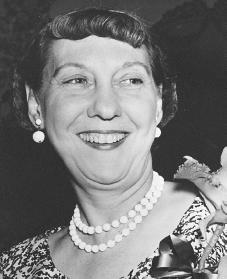 Mamie Eisenhower.
Courtesy of the
Library of Congress
.

Life in the White House

After Dwight won the presidency and took office in 1953, Mamie spent a great deal of her time on domestic matters in the White House. By this time she was used to overseeing a staff, and it was her job to see that the executive mansion was run efficiently. She also supported charitable causes and showed her respect for the history of the White House by leading a drive to find and recover genuine presidential antiques. She and her husband agreed to a division of labor during his two terms ("Ike took care of the office—I ran the house").

Mamie was the first lady of the United States at a time when home and family were considered the most important things in life. Dwight observed of his wife: "I personally think that Mamie's biggest contribution was to make the White House livable, comfortable, and meaningful for the people who came in. She was always helpful and ready to do anything.… She saw that as one of her functions and performed it, no matter how tired she was."

Dwight left office in 1961. Although he remained interested and willing to offer his opinions on national matters until his death in 1969, he and Mamie were at last able to enjoy something like a peaceful retirement. Mamie lived quietly after her husband's death until she passed away on November 1, 1979, in Washington, D.C.

David, Lester, and Irene David. Ike and Mamie: The Story of the General and His Lady. New York: Putnam, 1981.