Dwight D. Eisenhower was leader of the Allied forces in Europe during World War II (1939–45), commander of NATO, and thirty-fourth president of the United States (1953–61).

Dwight D. Eisenhower was born in Denison, Texas, on October 14, 1890, the third of seven sons. Soon after his birth, the family moved to Abilene, Kansas. His family was poor, and Eisenhower early learned the value of hard work, earning money selling vegetables and working for a creamery, a place where milk products like butter and cheese are made or sold.

Although Eisenhower was an average student, he enjoyed studying history. His heros included military figures like George Washington (1732–1799) and Hannibal (247–183 B.C.E. ). He excelled in athletics, particularly football. Eisenhower graduated from Abilene High School in 1909 and then went to work for a year to help pay for his brother's college education. In 1911 he attended West Point Military Academy, where he was more interested in sports, especially football, than in his studies. Eisenhower graduated from West Point in 1915 and married Mamie Doud (1896–1979) the next year.

Army career and command in Europe

Eisenhower's army career was marked by a slow rise to greatness. He graduated first in his class in 1926 from the army's Command and General Staff School. Following graduation, he served under General Douglas MacArthur (1880–1964), becoming MacArthur's aide in the Philippines. Returning to the United States in 1939, Eisenhower became chief of staff of the Third Army. In 1941 he attracted attention with his brilliance in commanding the training of 420,000 American soldiers in Louisiana.

When the United States joined World War II (1939–45) in 1941, Eisenhower became chief of the War Plans Division of the U.S. Army General Staff. He helped with preparations for the war in Europe. In May 1942 he was made supreme commander of the Allied Forces in Europe and traveled to London in June of the same year. (In World War II, the Allied forces—France, Great Britain, the Soviet Union, China, and the United States—fought against the Axis forces—Germany, Italy, and Japan.)

Eisenhower's personal qualities were precisely right for his new position. He successfully dealt with British generals and with the strong prime minister of Great Britain, Winston Churchill (1874–1965). Eisenhower's post called for an ability to get along with people and yet maintain his own position as leader of the Allied forces. In addition to his ability to gain respect, Eisenhower also showed skill in choosing qualified people to serve under him.

In June 1942 Eisenhower was made the leader of the November 1942 invasion of North Africa. The plan for the invasion of North Africa was to trap the Axis troops led by Erwin Rommel (1891–1944) between British and U.S. forces. By May 1943 the North African operation had succeeded and the Allies had taken control of Africa. Despite British reluctance, Eisenhower began preparing for the June 1944 invasion of Europe at Normandy, France. After the Allies successfully landed in Normandy, Eisenhower led the forces forward triumphantly to defeat the German armies. By spring 1945 the war in Europe was over. Eisenhower became one of the best-known men in the United States and some saw a career in politics in his future.

From Columbia University to the presidency

Eisenhower denied any desire to enter politics and in 1948 left the military to become president of Columbia University. In 1950 he accepted an offer made by President Harry Truman (1884–1972) to become the first commander of the newly formed North Atlantic Treaty Organization (NATO; an organization formed by many European countries and the United States, who all signed a treaty in 1949 agreeing to defend Western Europe against a possible attack by the Soviet Union). As the commander of NATO, Eisenhower's ability to deal with men of strong and differing opinions was valuable.

Although Eisenhower had not previously claimed any interest in politics, he remained popular with the American public. He became the Republican candidate in the 1952 presidential election and won by a tremendous margin. Throughout 1955 and 1956 he suffered health problems but was able to accept his party's renomination and easily won the 1956 election.

Eisenhower's strength as president was largely based upon his strong character. For most of his presidency, he was compelled to rely upon both Democrats and Republicans. As a leader, Eisenhower shared power with others and often took positions in the center. He was influenced by his secretary of the treasury, George Humphrey (1890–1970), and by his secretary of state, John Foster Dulles (1888–1959).

To classify Eisenhower as liberal (in favor of individual rights) or conservative (in favor of preserving tradition and gradual change) is difficult. He was sympathetic to business and was not in favor of enlarging the role of government in economic affairs. Yet he favored some liberal ideas, such as social security, minimum wage, and the establishment of the Department of Health, Education, and Welfare.

The most significant development in domestic policy during Eisenhower's years as president came through the Supreme Court. First in 1953, the president appointed Earl Warren (1891–1974) to the post of chief justice. In 1954 the Warren Court declared segregation (separation according to race) in the schools unconstitutional, giving new support to the civil rights movement. 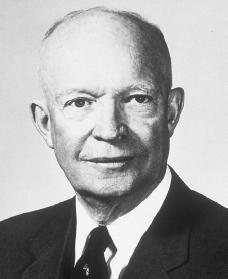 Eisenhower was extremely cautious in carrying out the Supreme Court's decision. Nonetheless, he was forced to take action in 1957 when Arkansas governor Orval Faubus (1910–1994) acted against the court's decision by using national guardsmen to prevent African Americans from entering schools in Little Rock, Arkansas. After various efforts to enforce the law, the president sent federal troops to Little Rock. During his second term, Eisenhower signed laws to enforce desegregation (the process of ending separation according to race), and in 1960 he made resistance to desegregation a federal offense.

Eisenhower encouraged the strengthening of NATO while also seeking to improve relations with the Soviet Union. During the years since World War II, France, Great Britain, the U.S.S.R., and the United States made little progress on the problem of a divided Germany. (After World War II, Germany had been divided into four different areas, each of which was controlled by a separate country—France, Great Britain, the United States, and the Soviet Union. The area occupied by the Soviet Union eventually became Communist East Germany, and the other three areas joined to form West Germany under a democratic government.) A new effort to work out the situation began in 1959, and an international conference was planned. The conference was cancelled when Soviets captured an American spy plane over the Soviet Union.

In Asia Eisenhower worked out a truce with the North Koreans to end the Korean War (1950–53; a war fought between South Korea, supported by the United Nations and the United States, and North Korea). The president's secretary of state negotiated the treaty that created the Southeast Asia Treaty Organization (SEATO). The United States pledged to consult with the members of SEATO and to help meet any threat to peace in Southeast Asia. This treaty was especially significant to Vietnam, which in 1954 was divided into North Vietnam and South Vietnam. North Vietnam came under Communist control, while the anti-Communist South was increasingly supported by the United States.

Meanwhile in Latin America, Cuba was ruled by an increasingly brutal and domineering president, Fulgencio Batista (1901–1973). In 1958, the American government withdrew military support from the Batista regime. A collapse of the government followed, and the Cuban leftist leader, Fidel Castro (1926–), took control of the government. Castro began to develop close ties with the Soviet Union, and relations between Cuba and the United States ended in January 1960.

Eisenhower's death in Washington, D.C., on March 26, 1969, was an occasion for national mourning and for worldwide recognition of his important role in the events of his time. Few presidents have enjoyed greater popularity than Eisenhower. He was widely admired for his strong character and his modesty.

I thought it was a very informative article. What I was looking for is how he got the nickname "Ike"? I would appreciate some information regarding that.
4
not_a_robot

Wasn't his name David Dwight Eisenhower when he was first born? Why isn't that on here? I know he changed it to Dwight David Eisenhower, but shouldn't it say that on the article?