The German-born American physicist (one who studies matter and energy and the relationships between them) Albert Einstein revolutionized the science of physics. He is best known for his theory of relativity, which holds that measurements of space and time vary according to conditions such as the state of motion of the observer.

Albert Einstein was born on March 14, 1879, in Ulm, Germany, but he grew up and obtained his early education in Munich, Germany. He was a poor student, and some of his teachers thought he might be retarded (mentally handicapped); he was unable to speak fluently (with ease and grace) at age nine. Still, he was fascinated by the laws of nature, experiencing a deep feeling of wonder when puzzling over the invisible, yet real, force directing the needle of a compass. He began playing the violin at age six and would continue to play throughout his life. At age twelve he discovered geometry (the study of points, lines, and surfaces) and was taken by its clear and certain proofs. Einstein mastered calculus (a form of higher mathematics used to solve problems in physics and engineering) by age sixteen.

Einstein's formal secondary education ended at age sixteen. He disliked school, and just as he was planning to find a way to leave without hurting his chances for entering the university, his teacher expelled him because his bad attitude was affecting his classmates. Einstein tried to enter the Federal Institute of Technology (FIT) in Zurich, Switzerland, but his knowledge of subjects other than mathematics was not up to par, and he failed the entrance examination. On the advice of the principal, he first obtained his diploma at the Cantonal School in Aarau, Switzerland, and in 1896 he was automatically admitted into the FIT. There he came to realize that he was more interested in and better suited for physics than mathematics.

Einstein passed his examination to graduate from the FIT in 1900, but due to the opposition of one of his professors he was unable to go on to obtain the usual university assistantship. In 1902 he was hired as an inspector in the patent office in Bern, Switzerland. Six months later he married Mileva Maric, a former classmate in Zurich. They had two sons. It was in Bern, too, that Einstein, at twenty-six, completed the requirements for his doctoral degree and wrote the first of his revolutionary scientific papers.

Thermodynamics (the study of heat processes) made the deepest impression on Einstein. From 1902 until 1904 he reworked the foundations of thermodynamics and statistical mechanics (the study of forces and their effect on matter); this work formed the immediate background to his revolutionary papers of 1905, one of which was on Brownian motion.

In Brownian motion, first observed in 1827 by the Scottish botanist (scientist who studies plants) Robert Brown (1773–1858), small particles suspended in a liquid such as water undergo a rapid, irregular motion. Einstein, unaware of Brown's earlier observations, concluded from his studies that such a motion must exist. He was guided by the thought that if the liquid in which the particles are suspended is made up of atoms, they should collide with the particles and set them into motion. He found that the motion of the particles will in time experience a forward movement. Einstein proved that this forward movement is directly related to the number of atoms per gram of atomic weight. Brownian motion is to this day considered one of the most direct proofs of the existence of atoms. 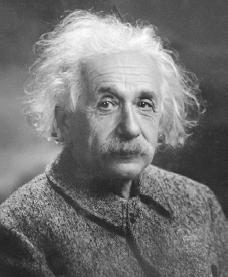 Albert Einstein.
Courtesy of the
Library of Congress
.
(light) behaves as if it is made up not of waves but of particles of energy. He presented an equation for the photoelectric effect, in which electrons (particles in the outer portion of an atom that are said to have a "negative" electrical charge equal to that of protons, particles with a larger mass that are said to have a "positive" electrical charge) are ejected from a metal surface that has been exposed to light. Einstein proved that the electrons are not ejected in a constant stream but like bullets from a gun, in units, or "quanta." Although Einstein's famous equation for the photoelectric effect—for which he won the Nobel Prize in physics in 1921—appears obvious today, it was an extremely bold prediction in 1905. Not until years later did R. A. Millikan finally succeed in confirming it to everyone's everyone's satisfaction.

The theory of relativity came from Einstein's search for a general law of nature that would explain a problem that had occurred to him when he was sixteen: if one runs at, say, 4 4 miles per hour (6.4 kilometers per hour) alongside a train that is moving at 4 4 miles per hour, the train appears to be at rest; if, on the other hand, it were possible to run alongside a ray of light, neither experiment nor theory suggests that the ray of light would appear to be at rest. Einstein realized that no matter what speed the observer is moving at, he must always observe the same velocity of light, which is roughly 186,000 miles per second (299,274 kilometers per second). He also saw that this was in agreement with a second assumption: if an observer at rest and an observer moving at constant speed carry out the same kind of experiment, they must get the same result. These two assumptions make up Einstein's special theory of relativity. Also in 1905 Einstein proved that his theory predicted that energy (E) and mass (m) are entirely related according to his famous equation, E=mc 2 . This means that the energy in any particle is equal to the particle's mass multiplied by the speed of light squared.

These papers made Einstein famous, and universities soon began competing for his services. In 1909, after serving as a lecturer at the University of Bern, Einstein was called as an associate professor to the University of Zurich. Two years later he was appointed a full professor at the German University in Prague, Czechoslovakia. Within another year-and-a-half Einstein became a full professor at the FIT. Finally, in 1913 the well-known scientists Max Planck (1858–1947) and Walther Nernst (1864–1941) traveled to Zurich to persuade Einstein to accept a lucrative (profitable) research professorship at the University of Berlin in Germany, as well as full membership in the Prussian Academy of Science. He accepted their offer in 1914, saying, "The Germans are gambling on me as they would on a prize hen. I do not really know myself whether I shall ever really lay another egg." When he went to Berlin, his wife remained behind in Zurich with their two sons; they divorced, and Einstein married his cousin Elsa in 1917.

In 1920 Einstein was appointed to a lifelong honorary visiting professorship at the University of Leiden in Holland. In 1921 and 1922 Einstein, accompanied by Chaim Weizmann (1874–1952), the future president of the state of Israel, traveled all over the world to win support for the cause of Zionism (the establishing of an independent Jewish state). In Germany, where hatred of Jewish people was growing, the attacks on Einstein began. Philipp Lenard and Johannes Stark, both Nobel Prize–winning physicists, began referring to Einstein's theory of relativity as "Jewish physics." These kinds of attacks increased until Einstein resigned from the Prussian Academy of Science in 1933.

On several occasions Einstein had visited the California Institute of Technology, and on his last trip to the United States he was offered a position in the newly established Institute for Advanced Studies in Princeton, Massachusetts. He went there in 1933.

Einstein played a key role (1939) in the construction of the atomic bomb by signing a famous letter to President Franklin D. Roosevelt (1882–1945). It said that the Germans had made scientific advances and that it was possible that Adolf Hitler (1889–1945, the German leader whose actions led to World War II [1939–45]), might become the first to have atomic weapons. This led to an all-out U.S. effort to construct such a bomb. Einstein was deeply shocked and saddened when his famous equation E=mc 2 was finally demonstrated in the most awesome and terrifying way by using the bomb to destroy Hiroshima, Japan, in 1945. For a long time he could only utter "Horrible, horrible."

It would be difficult to find a more suitable epitaph (a brief statement summing up a person's person's life) than the words Einstein himself used in describing his life: "God …gave me the stubbornness of a mule and nothing else; really …He also gave me a keen scent." On April 18, 1955, Einstein died in Princeton.

Famous Scientist and well written article. Some scientists are born yet some are made but as per this article one wonders if Geniuses do still exist but today's advance in technology I think are now retarding the evolution of many Einsteins today. The great realisation is how science links up with politics but one wonders if his participation in the development of the atomic bomb ever made him reflect back on his X-tian morals. But I also read he was a good Christian. But on the whole it is a well written article.
3
GABRIEL LEVY

Albert Einstein was one of the most brilliant scientists of all time. His theory about our realization of the passage of time being relative to the speed that we are traveling at, was a revolutionary discovery. It's too bad that someone like Nostradamus ( French prophet) didn't live at the same time that Einstein did. Based on what I learned about Nostradamus and Einstein's theory about time, I predict that there will be an EARTHQUAKE about 6 miles north of Ashland, Virginia on Wednesday, August 22, 2012 at 11:33:37 PM EDT. Epicenter near the intersection of Routes 95 and 30. Magnitude 4.7 Richter. Thank You for this article on Einstein.
4
krishna dubey

He was really a grate one. He was the man who really brings a great revalution in physic in his theorys nk clear all the fading thin. We aways thnkful to u .We all hv so much love to our great man .
5
sarath

Einstein was the brilliant scientist. I love his theory of relativity
6
lupe

albert was a great theoretical physicist that ever lived. i envy how he perceived and imagined things and the way things are so made easier in our days i alone fully doubt that we will have such a warrior like him. to me he was a flower that grew in a concrete remember they cricised him and hintler had a bounty on his head just imagine but none of those things hindered him from pursuing what he believed in. even to date i still maintain his qoutes all over my wallroom and i would love to be his student if he was still alive.