George Eliot was the pen name (a writing name) used by the English novelist Mary Ann Evans, one of the most important writers of European fiction. Her masterpiece, Middlemarch, is not only a major social record but also one of the greatest novels in the history of fiction.

Mary Ann Evans was born November 22, 1819, in Warwickshire, England, to Robert Evans, an estate agent, or manager, and Christiana Pearson. She lived in a comfortable home, the youngest of three children. When she was five years old, she and her sister were sent to boarding school at Attleborough, Warwickshire, and when she was nine she was transferred to a boarding school at Nuneaton. It was during these years that Mary discovered her passion for reading. At thirteen years of age, Mary went to school at Coventry. Her education was conservative (one that held with the traditions of the day), dominated by Christian teachings.

Mary Ann completed her schooling when she was sixteen years old. In her twenties she came into contact with a circle of people whose thinking did not coincide with the opinions of most people and underwent an extreme change of her beliefs. Influenced by the so-called Higher Criticism—a largely German school that studied the Bible and that attempted to treat sacred writings as human and historical documents—she devoted herself to translating these works from the German language to English for the English public. She published her translation of David Strauss's Life of Jesus in 1846 and her translation of Ludwig Andreas Feuerbach's Essence of Christianity in 1854.

In 1851 Evans became an editor of the Westminster Review, a sensible and open-minded journal. Here, she came into contact with a group known as the positivists. They were followers of the doctrines of the French philosopher (a seeker of knowledge) Auguste Comte (1798–1857), who were interested in applying scientific knowledge to the problems of society. One of these men was George Henry Lewes (1817–1878), a brilliant philosopher, psychologist (one who is educated in the science of the mind), and literary critic, with whom she formed a lasting relationship. As he was separated from his wife but unable to obtain a divorce, their relationship was a scandal in those times. Nevertheless, the obvious devotion and long length of their union came to be respected.

In the same period Evans turned her powerful mind from scholarly and critical writing to creative work. In 1857 she published a short story, "Amos Barton," and took the pen name "George Eliot" in order to prevent the discrimination (unfair treatment because of gender or race) that women of her era faced. After collecting her short stories in Scenes of Clerical Life (2 vols., 1858), Eliot published her first novel, Adam Bede (1859). The plot was drawn from a memory of Eliot's aunt, a Methodist preacher, whom she used as a model for a character in the novel.

Eliot's next novel, The Mill on the Floss (1860), shows even stronger traces of her childhood and youth in small-town and rural England. The final pages of the novel show the heroine reaching toward a "religion of humanity" (the belief in human beings and their individual moral and intellectual abilities to work toward a better society), which was Eliot's aim to instill in her readers.

In 1861 Eliot published a short novel, Silas Marner, which through use as a school textbook is her best-known work. This work is about a man who has been alone for a long time and who has lost his faith in his fellow man. He learns to trust others again by learning to love a child who he meets through chance, but whom he eventually adopts as his own.

In 1860 and 1861 Eliot lived abroad in Florence, Italy, and studied Renaissance (a movement that began in fourteenth-century Italy, that spread throughout Europe until the seventeenth century, with an emphasis in arts and literature) history and culture. She wrote a historical novel, Romola (published 1862–1863), set in Renaissance Florence. This work has never won a place among the author's major achievements, yet it stands as a major example of historical fiction.

Eliot aimed at creating confidence in her readers by her honesty in describing human beings. In her next novel, Felix Holt (1866), she came as close as she ever did to setting up her fiction in order to convey her beliefs. In this work, however, it is not her moral but her political thought that is expressed as she addressed the social questions that were then disturbing England. The hero of the novel is a young reformer who carries Eliot's message to the working class. This message is that they could get themselves out of their miserable circumstances much more effectively by expecting more of themselves both morally and intellectually and not just through reform of the government or through union activities. In contrast to Holt, the conservative politician is shown to be part of the corrupt political process and a person who is dishonest with the working class people that he represents. The heroine of the novel supports this political lesson by choosing the genuine, but poor, reformer rather than the 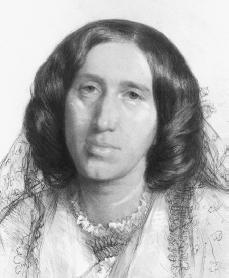 George Eliot.
Courtesy of the
National Portrait Gallery
.
opportunist (a person who takes advantage of any situations for personal gain with no regard for right or wrong) of her own class.

Eliot did not publish any novels for some years after Felix Holt, and it might have appeared that her creative thread was gone. After traveling in Spain in 1867, she produced a dramatic poem, The Spanish Gipsy, in the following year, but neither this poem nor the other poems of the period are as good as her nonpoetic writing.

Then in 1871 and 1872 Eliot published her masterpiece, Middlemarch, a broad understanding of human life. The main strand of its complex plot is the familiar Eliot tale of a girl's understanding of life. It tells of her awakening to the many complications involved in a person's life and that she has not used the true religion of God as a guide for how she should live her life. The social setting makes Middlemarch a major account of society at that time as well as a work of art. The title—drawn from the name of the fictional town in which most of the action occurs—and the subtitle, A Study of Provincial Life, suggest that the art of fiction here develops a grasp of the life of human communities, as well as that of individuals.

Eliot's last novel was Daniel Deronda (1874–1876). It is perhaps her least-read work, although recent critical attention has revealed its high value in at least one half of its plot, while raising still unanswered questions about its less successful half. The novel contrasts and interweaves two stories. One is a marriage for personal advantages by a young woman of sharp intelligence who discovers that she has given herself to a cheat. The other story is the discovery by a young British gentleman that he is of Jewish origin. This inspires in him to dedicate and commit his life to furthering the cause of the Jewish community to create a Zionist resettlement in Palestine. The moral relationship of these widely different situations and characters is one of the chief interests of the author, but although her intention is clear, her book and its message is not.

In 1880, after the death of Lewes, Eliot married a friend of long standing, John Walter Cross. She died in London on December 22, 1880, having gained the extreme respect and admiration from her peers and fellow novelists.