T. S. Eliot, American-English author, was one of the most significant poets writing in English in the twentieth century, as well as one of the most influential critics, an interesting playwright, editor, and publisher.

On September 26, 1888, Thomas Stearns Eliot was born in St. Louis, Missouri, a member of the third generation of a New England family that had come to St. Louis in 1834. Eliot's grandfather, William Greenleaf Eliot, Unitarian minister and founder of schools, a university, and charities, was the family patriarch, or leader. While carrying on a tradition of public service, the Eliots never forgot their New England ties. T. S. Eliot claimed that he was a child of both the Southwest and New England. In Massachusetts he missed Missouri's dark river, cardinal birds, and lush vegetation. In Missouri he missed the fir trees, song sparrows, red granite shores, and blue sea of Massachusetts.

Henry Ware Eliot, the father of T. S. Eliot, became chairman of the board of a brick company and served the schools and charities his father had helped found, as well as others. He married a New Englander, Charlotte Champ. After having six children, she focused her energy on education and legal protection for the young. She also wrote a biography, some religious poems, and a dramatic poem (1926).

Eliot grew up within the family's tradition of service to religion, community, and education. Years later he declared, "Missouri and the Mississippi have made a deeper impression on me than any part of the world." The Eliots spent summers on Cape Ann, Massachusetts.

Education of a poet

In St. Louis young Eliot received a classical education privately and at Smith Academy, originally named Eliot Academy. He composed and read the valedictory (something that involves a farewell) poem for his graduation in 1905. After a year at Milton Academy in Massachusetts, he went to Harvard 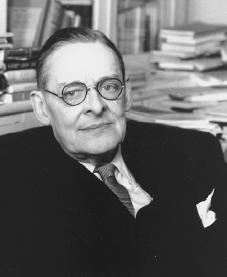 T. S. Eliot.
Reproduced by permission of
AP/Wide World Photos
.
University in 1906. Eliot was shy and independent and he made a good impression as a contributor and editor of the Harvard Advocate. He completed his bachelor of arts degree in three years.

Eliot's stay at Harvard to earn a master of arts in philosophy (the study of knowledge) was interrupted by a year at the Sorbonne (The University of Paris) in Paris, France. He returned to Harvard in 1911 but in 1914 he went overseas again on a Harvard scholarship to study in Germany. When World War I (1914–18; a war fought between the German-led Central powers and the Allies: England, the United States, and France, among other nations) broke out, he transferred to Merton College, Oxford. Ezra Pound (1885–1972), the young American poet, discovered Eliot at Oxford. They shared a commitment to learning and poetry. After Oxford, Eliot decided to stay in England and in 1915 married Vivienne Haigh-Wood. He taught at Highgate Junior School for boys near London (1915–1916) and then worked for Lloyd's Bank. While teaching, he completed his dissertation (a writing on a subject that is required for a doctorate degree), Knowledge and Experience in the Philosophy of F. H. Bradley. The dissertation was accepted, but Eliot did not return to the United States to defend it and therefore did not receive his doctorate.

When the United States entered World War I in 1917, Eliot tried to join the U.S. Navy but was rejected for physical reasons. That year his first volume of poetry, Prufrock and Other Observations, appeared and almost immediately became the focus for discussion and debate. Eliot's writing style spoke to the confusion and bad feelings that World War I had created in European and American societies. This was most effective in the poem "The Love Song of J. Alfred Prufrock."

Eliot served as literary editor of the Egoist, a feminist (in support of equality for women) magazine, from 1917 to 1919. The back pages of the Egoist were written by a series of young poet-editors, and here, with the aid of Ezra Pound, the new poetry and commentary was written. Eliot was also writing anonymous (a work where no name is given to the creator) reviews for the London Times and publishing essays. In 1919 two of his most influential pieces appeared. "Tradition and the Individual Talent" and "Hamlet and His Problems." Some of his early critical essays were The Sacred Wood (1920), Homage to John Dryden (1924), Selected Essays: 1917–1932 (1932), and The Use of Poetry and the Use of Criticism (1933).

While recovering from exhaustion in 1921, Eliot wrote The Waste Land, one of the most influential and debated poems of the century. In The Waste Land, the weakening of society is compared with a shattered wasteland. The poem proposes solutions for recreating personal and caring communities through a variety of methods and with the joining of different religious beliefs.

Also in 1922 Eliot founded the Criterion, a small magazine that appeared until 1939. As author of The Waste Land and editor of the Criterion, Eliot assumed an important role in literature in America and in Great Britain. He left Lloyd's Bank in 1925 and joined Faber and Faber, Ltd., a publisher, eventually rising to a position of leadership there.

In 1927 Eliot became an Anglo-Catholic and a British citizen. In After Strange Gods (1934) Eliot took the literary ideas of his "Tradition and the Individual Talent" and demonstrated how they could apply to society. He also declared that too many freethinking Jews would damage the kind of Christian culture he proposed. This work, along with The Idea of a Christian Society (1939) and Notes toward a Definition of Culture (1948), indicated Eliot's stand against the pluralistic society (a society that allows freedom of religion) of most Western democracies.

Ash Wednesday (1930) is the title of this six-part poem that refers to the beginning of Lent. The poem focuses on a person who is isolated from God and who sets out to find Him. The poem shows the prayer and progress of this person. The tone of sincerity and passionate yearning, of anxiety and some joy, was new for Eliot.

In 1934 Eliot published After Strange Gods and also brought his religious and dramatic interests together in The Rock. This display combines narrative prose (a story that is told in common, nonpoetic, language) with poetic dialogue (poetry written as though the poet were speaking).

In 1935 Murder in the Cathedral, perhaps Eliot's best play, was produced at Canterbury Cathedral. It has to do with Archbishop Thomas Becket (1118–1170), who was assassinated (killed for political reasons) before the altar there in 1170. The Family Reunion, the first of Eliot's four professional plays, appeared in 1939. This was followed by The Cocktail Party (1940), The Confidential Clerk (1954), and The Elder Statesman (1959).

In 1936 Eliot concluded his Poems 1909–1935 with "Burnt Norton," the first of what became the Four Quartets. "Burnt Norton," in which Eliot makes use of his repeated rose-garden symbolism, grew out of a visit to a deserted Gloucestershire mansion. This poem brought about three others, each associated with a place. "East Coker" (1940) is set in the village of Eliot's Massachusetts ancestors. The last two quartets appeared with the publication of Four Quartets (1943). The third, "The Dry Salvages," named for three small islands off the Massachusetts coast where Eliot vacationed in his youth; and the fourth, "Little Gidding," derives from a visit to the site of a religious community, where the British King Charles I (1600–1649) paused before he surrendered and went to his death. Each of the quartets is a separate whole that also is related to the others. The theme, developed differently, is the same in each: One may seek or wait in any place at any time, for God is in all places at all times.

Eliot, midway through his composition of Four Quartets, published Old Possum's Book of Practical Cats (1939). Here Eliot the fabulist (a writer of fables) appeared, and his humor and wit are demonstrated in this piece of work.

In 1947 Eliot's first wife died. In 1948 he received the Nobel Prize and the British Order of Merit, and the list of his honors continued to grow. After the Four Quartets, he committed himself to the poetic drama with On Poetry and Poets (1957), and the editing of collections of his poetry and plays. In 1957 Eliot married his private secretary, Valerie Fischer, and remained married until his death on January 4, 1965, in London. His ashes were placed in St. Michael's Church, East Coker, his ancestral village, on April 17, 1965.

Many poets and artists paid final tribute to T. S. Eliot, including Ezra Pound: "A grand poet and brotherly friend." A committed Christian in an important age, Eliot tried to restore the religious roots of European and American culture. His career recalls the flexible writer of the eighteenth century.