By mass-producing his inventions, the American inventor and industrialist (one who owns or manages an industry) George Eastman promoted photography as a popular hobby. He also donated large sums to educational institutions.

George Eastman was born in Waterville, New York, on July 12, 1854. His father, George W. Eastman, ran a business college in Rochester, New York; his mother, Maria Kilbourn, took care of young George and his two older sisters. His father died when he was seven, two years after the family moved to Rochester. His mother was forced to take in boarders to add to the family's small income. George was educated in Rochester public schools but dropped out at age thirteen to work and help his mother. He advanced from messenger to bookkeeper in the Rochester Savings Bank by 1877. He was always careful with money, spending it only on his hobby, amateur photography. When photographic chemicals among his cameras and supplies ruined his packed clothes on a trip to Mackinac Island, he became disgusted with the wet-plate process of producing photographs.

In the 1870s American photography was still time-consuming, difficult, and expensive. Equipment included a huge camera, strong tripod (a three-legged stand), large plateholder, dark tent, chemicals, water container, and heavy glass plates. Eastman experimented using dry plates. He was the first American to contribute to the improvement of photographic methods by coating glass plates with gelatin, a gummy substance, and silver bromide, a chemical. In 1879 his coating machine was patented in England, and in 1880 he received an American patent for it. He sold his English patent and opened a shop to manufacture photographic plates in Rochester. To do away with glass plates, Eastman coated paper with gelatin and photographic chemicals. The developed film was stripped from the paper to make a negative. This film was rolled on spools. Eastman and William Walker created a lightweight roll holder that would fit any camera.

Amateurs could develop pictures after Eastman substituted transparent (see-through) film for the paper in 1884. Flexible film was created by Hannibal Goodwin of New York and a young Eastman chemist, Henry Reichenback. The long patent battle between Goodwin and Eastman was the most important legal dispute in photographic history. A federal court decision in August 1913 favored Goodwin. Goodwin's family and Ansco Company, owners of his patent, received five million dollars from Eastman in 1914.

In 1888 Eastman designed a simple camera, the Kodak (a word created by Eastman; it has no meaning), which was easy to carry and made focusing and adjusting the light unnecessary. With a hundred-exposure roll of film, it sold for twenty-five dollars. After taking the pictures and sending the camera and ten dollars to the Rochester factory, the photographer received his prints and reloaded camera. Eastman's slogan, "You press the button, we do the rest," became well known.

Eastman expected that photography would soon become more popular, and in 1892 he established the Eastman Kodak 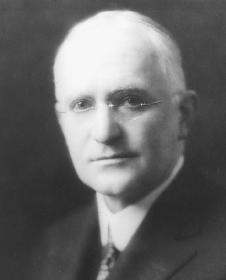 George Eastman.
Courtesy of the
Library of Congress
.
Company. This was one of the first American firms to mass-produce its goods and to maintain a chemical laboratory. By 1900 his factories at Rochester and at Harrow, England, employed over three thousand people, and by 1920 that number increased to more than fifteen thousand. Eastman, at first treasurer and general manager of the company, later became president and finally board chairman.

Daylight-loading film and cameras soon made it unnecessary to return the cameras to the factory. Eastman's old slogan changed to "You press the button, we do the rest, or you can do it yourself." A pocket Kodak was marketed in 1897, a folding Kodak in 1898, noncurling film in 1903, and color film in 1928. Eastman film was used in Thomas Edison's (1847–1931) motion pictures; Edison's incandescent (glowing with intense heat) bulb was used by Eastman and by photographers specializing in "portraits (photographs of people) taken by electric light."

Eastman's staff worked on other scientific problems as well as on photographic improvements. During World War I (1914–18) his laboratory helped build up America's chemical industry to the point where it no longer depended on Germany. Eventually America became the world leader.

Eastman cared about his employees; he was the first American businessman to grant workers shares in the profits made by the company. He also gave away large amounts of his huge fortune to the University of Rochester (especially the medical school and Eastman School of Music), Massachusetts Institute of Technology, Hampton Institute, Tuskegee Institute, Rochester Dental Dispensary, and several European dental clinics.

George Eastman remained a bachelor all of his life. After a long illness, he committed suicide on March 14, 1932, in Rochester. He had written to friends, "My work is done. Why wait?"

I'm George's cousin 4th removed and many stories and artifacts along with Family photos cameras...on & on. By the way my father (3rd removed) told me that George gave away 200 million dollars. I also have the 1K page book that George had made around 1900, ther were only two or three ever made.