The American aviator Amelia Earhart remains the world's best-known woman pilot even long after her mysterious disappearance during a round-the-world flight in 1937.

Childhood in the Midwest

Amelia Mary Earhart was born on July 24, 1897, the daughter of Edwin and Amy Otis Earhart. Until she was twelve she lived with her wealthy maternal grandparents, Alfred and Amelia Harres Otis, in Atcheson, Kansas, where she attended a private school. Her summers were spent in Kansas City, Missouri, where her lawyer-father worked for the Rock Island Railroad.

In 1909 Amelia and her younger sister, Muriel, went to live with their parents in Des Moines, Iowa, where the railroad had transferred her father. While in Des Moines, Earhart saw her first airplane while visiting a state fair. Because it had been only a few years since the Wright Brothers (Wilbur, 1867–1912; Orville, 1871–1948) made their first flight at Kitty Hawk, North Carolina, young Earhart was not overly impressed with what she saw at the fair. 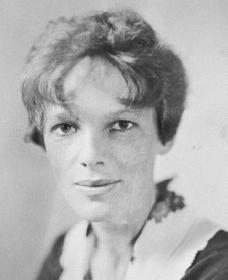 Amelia Earhart.
Courtesy of the
Library of Congress
.

Before she completed high school, Amelia also attended schools in St. Paul, Minnesota, and Springfield, Illinois. Meanwhile her father was fighting a losing battle against alcoholism. His failure and the humiliation it caused for her were the root of Amelia's lifelong dislike of alcohol and desire for financial security.

Amy Earhart left Edwin in Springfield in 1914, taking her daughters with her to live with friends in Chicago, Illinois, where Amelia graduated from the Hyde Park School in 1915. The yearbook described her as "A.E.—the girl in brown (her favorite color) who walks alone."

A year later, after Amy Earhart received an inheritance from the estate of her mother, she sent Amelia to Ogontz School in Philadelphia, an exclusive high school and junior college. During Christmas vacation of her second year there, Amelia went to Toronto, Canada, where Muriel was attending a private school. In Toronto Amelia saw her first amputee (a person who had one or more limbs removed), returning wounded from World War I (1914–18; a war in which Germany and Austria fought European and American forces). She immediately refused to return to Ogontz and became a volunteer nurse in a hospital for veterans, where she worked until after the armistice (truce) of 1918. The experience made her an lifelong pacifist (person opposed to war).

From Toronto Earhart went to live with her mother and sister in Northampton, Massachusetts, where her sister was attending Smith College. In the fall of 1919 she entered Columbia University, but left after one year to join her parents, who had gotten back together and were living in Los Angeles, California.

In the winter of 1920 Earhart saw her first air show and took her first airplane ride. "As soon as we left the ground," she said, "I knew I had to fly." She took lessons at Bert Kinner's airfield on Long Beach Boulevard in Los Angeles from a woman—Neta Snooks. On December 15, 1921, Amelia received her license from the National Aeronautics Association (NAA). By working part-time as a file clerk, office assistant, photographer, and truck driver, and with some help from her mother, Earhart eventually bought her own plane. However, she was unable to earn enough to continue her expensive hobby.

In 1924 Earhart's parents separated again. Amelia sold her plane and bought a car in which she drove her mother to Boston, where her sister was teaching school. Soon after that Earhart reenrolled at Columbia University in New York City, but she lacked the money to continue for more than one year. She returned to Boston, where she became a social worker, joined the NAA, and continued to fly in her spare time.

In 1928 Earhart accepted an offer to join the crew of a flight across the Atlantic. The flight was the scheme of George Palmer Putnam, editor of WE, Charles Lindbergh's (1902–1974) book about how he became the first person to fly alone across the Atlantic in 1927. Putnam chose her for his "Lady Lindy" because of her flying experience, her education, and her lady-like appearance. Along with pilot Wilmer Stultz and mechanic Louis Gordon, she crossed the Atlantic (from Newfoundland to Wales) on June 18-19, 1928. Although she never once touched the controls (she described herself afterward as little more than a "sack of potatoes"), Earhart became world-renowned as "the first woman to fly the Atlantic."

From that time on Putnam became Earhart's manager and, in 1931, her husband. He arranged all of her flying engagements, many of which were followed by difficult cross-country lecture tours (at one point, twenty-nine lectures in thirty-one days) staged to gain maximum publicity.

Earhart became upset by reports that she was largely a puppet figure created by her publicist husband and that she was something less than a competent aviator (pilot). To prove her skills as an aviator, she piloted a tiny, single-engine Lockheed Electra from Newfoundland, Canada, to Ireland. Then, on May 20-21, 1932, and five years after Lindbergh, Earhart became the first woman to fly solo across the Atlantic.

During the five years remaining in her life, Earhart acted as a tireless champion for commercial aviation and for women's rights. The numerous flying records she set include: an altitude record in an autogiro (an early aircraft, in 1931); the first person to fly an autogiro across the United States and back; the fastest nonstop transcontinental (continent to continent) flight by a woman (1932); breaking her own transcontinental speed record (1933); the first person to fly solo across the Pacific from Hawaii to California (1935); the first person to fly solo from Los Angeles to Mexico (1935); breaking the speed record for a nonstop flight from Los Angeles to Mexico City to Newark, New Jersey; and setting the speed record for the fastest east-west crossing from Oakland, California, to Honolulu, Hawaii (1937). She also collected numerous awards and honors from around the world.

On July 2, 1937, twenty-two days before her fortieth birthday and having already completed 22,000 miles of an attempt to fly around the world, Earhart and her navigator, Fred Noonan, disappeared over the Pacific somewhere between Lae, New Guinea, and Howland Island (an island in the central Pacific Ocean). The largest search ever conducted by the U.S. Navy for a single missing plane sighted neither plane nor crew. Later searches since that time have been equally unsuccessful. In 1992 an expedition found certain objects (a shoe and a metal plate) on the small atoll (island) of Nikumaroro south of Howland, which could have been left by Earhart and Noonan.

In 1997 another female pilot, Linda Finch, recreated Earhart's final flight in an around the world tribute entitled "World Flight 97." The event took place on what would have been Earhart's hundredth birthday. Finch successfully completed her voyage—the identical route that Earhart would have flown around the world.

If she died and no one could find her then why do they know when she died?
2
Shikirah McGill

what were her parents like before she died on the traggic flight which she was never seen again?
3
Amna

To Wade,
it was cuz they lost contact with her on her antenna. they dont know exactly when she died though.
4
Becca

Is it true that she might still be alive today. Or is that just a plain old myth.
5
Maigan

They don't know what day she died, exactly. The government pronounced her legally dead (because she had been missing for so long they assumed she wasn't alive anymore) in January, two years after she disappeared. As for fact, no one really knows what day she died, exactly. It could have been before that date, and it could have been after. As far as anyone knows, she could have died in the plane, and that's what caused it to crash.
6
Someone

My theory is that she could have ditched the plane, went back to the US, and took a different identity and lived their without everyone knowing and everyone freaking out about Earhart's disappearance.
7
Someone

Not only could she have ditched the plane and returned to the US, but she likely became an insurance agent and continued to fly on the weekends.
Such a wild and of course STUPID imagination.
8
Anonymus

Earhart probably isn't alive anymore since it's been like over 100 years since her plane ''crashed''. My theory is that she was secretly having an affair with her co-pilot so while they were flying around the world, together, they landed the plane somewhere super romote and unknown (haven't you wondered why we can't find a single trace of the plane), and just pretended that they were dead cause that's what the world wanted to believe.
9
dive goffdly

My theory is that she was secretly having an affair with her co-pilot so while they were flying around the world, together, they landed the plane somewhere super romote and unknown (haven't you wondered why we can't find a single trace of the plane), and just pretended that they were dead cause that's what the world wanted to believe.
10
gwen

i doubt that is true jayden ,i believe the story is true how it goes