François Duvalier was the president of Haiti from 1957 until his death. Trained as a physician and known to his people as "Papa Doc," Duvalier ruled his country as no other Haitian chief executive had, using violence and phony elections to hold down any opposition.

François Duvalier was born in Port-au-Prince, Haiti, on April 14, 1907. His family belonged to the middle class. His grandfather had been a tailor, and his father was a school-teacher and municipal court judge. Duvalier believed that his people's African traditions should be preserved and protected from the influence of European countries. He was one of the founders of the Haitian intellectual Griot movement of the 1930s, whose members celebrated their African roots and even the practice of voodoo (a religion involving communication with spirits) as important elements of Haitian culture. Duvalier graduated in 1934 from the Haitian National University Medical School. In 1939 he married Simone Ovide, a nurse, and they had three daughters and a son.

Duvalier was active in sanitary programs initiated in Haiti by the U.S. army during World War II (1939–45) to prevent yaws, a contagious tropical disease. In 1944–45 he studied at the University of Michigan. After returning to Haiti, he became minister of health and labor in the government of President Dumarsais Estimé, who had once taught Duvalier in high school. After opposing the takeover of the government by Paul Magloire in 1950, Duvalier returned to the practice of medicine, especially the campaigns to prevent yaws and other diseases. In 1954 he abandoned medicine and went into hiding in the Haitian countryside. In 1956 the Magloire government forgave all of its political opponents. Duvalier immediately emerged from hiding and declared his candidacy for the next elections.

Duvalier had a solid base of support in the countryside, and his campaign was similar to those of the other candidates in that they all promised to rebuild the country and give it a new start. Duvalier, however, made various deals with one or more of the other candidates, won the army over to his side, and finally defeated Louis Déjoie, his main opponent, in what turned out to be the quietest and most honest election in Haiti's history.

In spite of this favorable start, Duvalier's government was burdened with many problems. The defeated candidates refused to cooperate with him and, from hiding, encouraged acts of violence and disobedience against the new president. After Fidel Castro (1927–) came to power in Cuba, that country began to harbor Haitian refugees who had escaped the increasingly harsh conditions of the Duvalier government. In addition, General Rafael Trujillo (1891–1961), dictator (military ruler) of the Dominican Republic and enemy of Castro, feared a Cuban invasion through Haiti, and this concern led to Dominican interference in Haitian affairs.

It was during this period that Duvalier created an organization directly responsible to him, the Tontons Macoutes (also known as "Bogeymen"), the Haitian version of a secret police. Through the late 1950s to the middle 1960s this force continued to grow and was responsible for terrorizing and assassinating anyone thought to be an opponent of Duvalier. In the 1961 elections Duvalier altered the ballots to have his name placed at the top. Afterward he announced that his victory gave him another six years in office. In the words of the New York Times of May 13, 1961, "Latin America has witnessed many fraudulent (fake) elections … but none will have been more outrageous than the one which has just taken place in Haiti."

After the 1961 elections the American government made it clear that the United States disputed the truth of the results and that Duvalier's legal term should end in 1963. During 1962 the American Agency for International Development (AID) mission was withdrawn from Haiti, and by April 1963 an American fleet moved into position close to Port-au-Prince. On May 15, to show its disapproval of Duvalier's continued presence, the United States suspended diplomatic relations with Haiti, refusing to engage it in discussions of international matters. At the same time, relations between Haiti and the Dominican Republic were getting worse, and Duvalier's main enemy, Dominican President Juan Bosch, was threatening to invade Haiti. 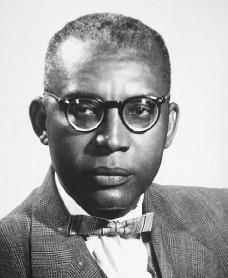 François Duvalier.
Reproduced by permission of
Archive Photos, Inc.
Even the Organization of the American States (OAS) became involved, sending a fact-finding mission to Haiti. However, Duvalier remained firmly in control, the Dominicans backed down, and Haiti went back to business as usual.

After the election of 1961 and the continuation of Duvalier's rule in 1963, many observers felt it was only a matter of time before Duvalier moved to have himself installed as permanent Haitian president. On April 1, 1964, that was exactly what happened. The Legislative Chamber, which did whatever Duvalier wanted, rewrote the 1957 constitution, making a point of changing Article 197 so that Duvalier could be declared president for life. A "vote" on the new constitution was held, and on June 22, 1964, Duvalier was officially named president for life.

After that time Haitian political life was a little calmer. Having taken over his country and holding off the United States, the OAS, and the Dominican Republic in the process, Duvalier was in complete control. During the 1960s he survived several damaging hurricanes and numerous attempts to overthrow him. A small, gray-haired man, Duvalier began suffering from heart disease and other health problems. In January 1971 he directed the National Assembly to change the constitution to allow his son, Jean Claude Duvalier (1951–), to succeed him. Duvalier died on April 21, 1971, and his son immediately took over.

Without a doubt, Francois "Papa Doc" Duvalier was my hero. He was one of the finest sons Haiti ever produced. His spirit lives on.
2
J. W. Jean-Pierre

Francois Duvalier destroyed the Haitians Dream. He destroyed the future of that beautiful country. He destroyed the future of democracy in this country. He is responsible for everything that is going on in Haiti at this present time. One simple thing he should do after his term was organizing the election to put a new president for the sake of the Haitians living in the country at that time and for ever. In conclusion, Francois Duvalier was a criminal.
3
Hugue Luma

Duvalier ofcourse was a criminal but i have a question why the united states never did anything about the situation because in my view if the U.S didn't want him they would've done somthing because they could just give him a phone call and tell him to leave the office and honestly he would.