With many roles including westerns and the Dirty Harry series, Clint Eastwood became one of the world's most popular and successful movie stars. He also established himself as a successful director.

Clinton Eastwood Jr. was born on May 31, 1930, in San Francisco, California. He was the first of Clinton and Ruth Eastwood's two children. Eastwood attended eight different grammar schools, as his parents moved frequently in search of work during the Great Depression (1929–39; a time when the U.S. economy was very weak and many people were without work). They finally settled in Oakland, California. He attended Oakland Technical High School and even appeared in a school play, an experience he did not enjoy. Eastwood swam competitively in high school and also played on the basketball team. After graduating in 1948, he held various low-paying jobs before being drafted into the army. He was discharged in 1953. Then he enrolled in Los Angeles City College as a business major, supporting himself with various odd jobs, including digging swimming pool foundations.

Army friends in the film business urged Eastwood to take a screen test at Universal Studios. His good looks landed him a job as a contract player in 1955. He earned seventy-five dollars a week playing small parts in bad movies. Universal dropped him in 1956, and by 1958 Eastwood was again digging swimming pools for a living. As the result of a chance meeting, he was chosen for the cast of the Columbia Broadcasting System (CBS) television series Rawhide, which lasted seven years (1959–66).

During a break from Rawhide in 1964, Eastwood filmed the western A Fistful of Dollars in Spain with Italian director Sergio Leone. The film made Eastwood an overnight star. He returned to Europe to film two more westerns, For a Few Dollars More (1965) and The Good, The Bad, and The Ugly (1966). Eastwood's character in these films was cold and tough, as were characters in his later westerns, such as The Outlaw Josey Wales (1976) and Unforgiven (1992). Another tough character he created was Harry Callahan, a detective who ignores police regulations and practices his own brand of justice. Callahan was introduced in Dirty Harry (1971), which viewers loved. Eastwood made four later films with the Callahan character.

Eastwood's first attempt at directing a film was successful with Play Misty for Me (1971), a thriller. It received good reviews and did well at the box office, as did many of the films he directed after it. He starred in most of them, but not in one of his finest efforts, Bird (1988), which dealt with the life of the jazz musician Charlie Parker 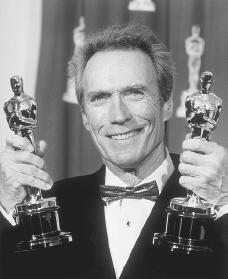 Clint Eastwood.
Reproduced by permission of the
Corbis Corporation
.
(1920–1955). Jazz music has appeared frequently on the soundtracks of many of Eastwood's films.

In the early 1980s Eastwood began to receive more recognition for his contributions as producer and director, especially in his smaller films. In 1985 he flew to Paris, France, to accept the honor of Chevalier des Arts et Lettres, a national award. In 1992 Eastwood won his first Academy Award for Unforgiven. Three years later the Academy honored him with the Irving G. Thalberg Memorial Award, which is given to producers or directors with a body of high-quality motion picture work. Eastwood continues to act and direct, his later films including The Bridges of Madison County (1995), Absolute Power (1997), and Space Cowboys (2000).

Eastwood lives in Carmel, California. Most of his friends are not involved in show business. He has been approached many times to run for political office but has refused, except for serving a two-year term (1986–88) as mayor of Carmel. Eastwood decided to run because he disapproved of zoning laws in the city. After changing the laws, he stepped down. Eastwood had two children with his first wife Maggie Johnson, whom he married in 1953. They divorced in 1984 after a long separation, with Johnson receiving a reported $25 million settlement. Eastwood also lived for over ten years with actress Sandra Locke, who appeared in many of his films. The end of that relationship resulted in a lawsuit that required Eastwood to pay Locke more than $7 million. In 1996 Eastwood married Dina Ruiz, a television reporter.

In 2000 a jury ruled that Eastwood did not have to pay damages to a disabled woman who claimed his Mission Ranch Inn did not comply with the Americans with Disabilities Act. However, Eastwood was ordered to improve handicapped access to the hotel office at his property near Carmel. Later that year Eastwood was given a Kennedy Center Honor by U.S. president Bill Clinton (1946–) and praised as a man who continues to take risks in his work. In 2001 Eastwood received the San Francisco International Film Festival's Akira Kurosawa Award for directing. Later that year, noting Eastwood's concern for the environment, the governor of California appointed him to the state's Park and Recreation Commission.

Have been watching Clint from the sixty's. Have watched most of his movies, including but not limited to the good, the bad and the ugly, a fistful of dollars, for a few dollars more, in the line of fire, and the dirty Harry sequel. I simply admire the man!
2
Charolette McFarland Hicks

He is the finest actor that has ever hit the movies, television, etcetera. He is the best out of every Male actor. My brother died in February this year 2018 & he felt the same way. In fact he sort of resembled Mr. Eastwood. Last year I gave him the collection of Dirty Harry movies plus some. Mr. Eastwood you are very much appreciated and loved for what you do. Thank you so much for giving so much of yourself so people can get away from their problems for a little while watching your movies. Yours truly Charolette McFarland Hicks ( brother Frank)